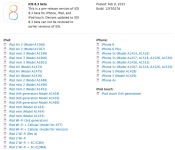 Apple today seeded the first beta of iOS 8.3 to registered developers for testing purposes, just a week after seeding the fifth beta of iOS 8.2, which is also currently in testing.

The beta, build number 12F5027d, also includes Xcode 6.3 beta with Swift 1.2. It is not clear at this time what the iOS 8.3 beta introduces, but it likely includes several bug fixes. As a .1 update, it may also introduce new features.

Xcode 6.3, included with the beta, introduces a new version of the Swift language. According to Apple’s release notes, Swift 1.2 includes “a number of noteworthy changes” to the language. Xcode 6.3 also includes enhancements to ease interoperability between Swift and Objective-C code.