Grab Oddworld: Stranger’s Wrath for 33% off in the Play Store 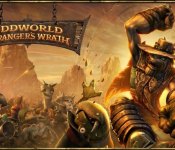 If you’re a fan of the popular Oddworld series but aren’t so keen on the price, listen up. Oddworld: Stranger’s Wrath is currently being offered for $3.99 in the Google Play Store for a limited time. Considering the game is usually sold for $5.99, a 33% off discount may warrant a second thought on buying the game. The discount will only be available for a limited time, so be sure to grab the game quickly if you’re interested.

For those unfamiliar with the game, you play as a bounty hunter called Stranger who hunts down outlaws in a Western-themed wasteland called Mudos. You’ll meet a ton of trash-talking characters in the game as you explore towns, forests and industrial facilities. Stranger’s Wrath also gives you the option of either playing as a first-person shooter or a third-person platformer.

Overall, the game is really fun and offers a great story line that will keep you playing for hours. Personally, I’d recommend the game at it’s normal price tag for $5.99. Though it’s not the most appealing discount, you may want to reconsider buying the game if you haven’t yet.

Head to the Play Store link below to download Oddworld: Stranger’s Wrath.