Humble Mobile Bundle 10 up and running with OTTTD, LYNE and 4 others for now

Looking for another great deal on multiple games for a low cost donation? The Humble Mobile Bundle is always a good way to fill up your gaming folder. In true fashion the HMB starts off with a few titles under a certain price and a few more if you beat the average. Any donation will […]

The post Humble Mobile Bundle 10 up and running with OTTTD, LYNE and 4 others for now appeared first on AndroidSPIN.

Mobile phone cameras have certainly come along way over the last few years. The image sensors, resolution, speed and manual settings easily put them ahead a multitude of point and shoot cameras and in some cases can replace the bulkiness of a DSLR in some situations. While they are pretty amazing, there is still a […]

Windows 8.1 with Bing is free for OEMs on tablets under 9 inches

Microsoft technically charges OEMs $10 for each copy of Windows 8.1 with Bing for installation on new tablets under nine inches. However, newly revealed OEM pricing documents show that Microsoft is currently offering those same OEMs a $10 “configuration discount” for Windows 8.1 with Bing, effectively making it free.

Over the past few years, T-Mobile has been gaining some headway in the United States with the company’s Un-carrier initiative. Unfortunately, that might not get them to where they want to be, according to some higher-ups in the carrier world. In an interview with Re/code, Tim Hoettges, Deutsche Telekom CEO, explains that in order to compete with the likes of Verizon and AT&T, T-Mobile still needs “greater scale” in the US.

Sprint has been in talks with Deutsche Telekom about buying T-Mobile for the past few years. Thanks to US regulatory authorities, the deal ended up falling through because it would decrease the number of major US carriers from four to three. While this may have seemed like a positive situation at the time, Hoettges explains his thoughts on the matter:

I was intrigued by the idea of having a combination with Sprint and being the ‘super-maverick’ in the market. I hope that the political environment will change at one point in time.

While growing in marketshare and surpassing Sprint is an important feat to accomplish for the company, Hoettges says that the biggest hurdle is Verizon and AT&T’s concentration of wealth and spectrum that T-Mobile should be worried about. The CEO admits that while T-Mobile’s current Un-carrier initiative has been working so far, it won’t generate enough revenue to compete with the top two carriers. He says that T-Mobile will need to invest “between $4 billion and $5 billion each year just to keep up.”

As you can see in the images below, the notification tray, lock screen, Quick Settings and multitasking menu have all encountered major design changes bringing them in line with the Material Design standard Google unveiled at its official “Android L” conference back in June, 2015.

What do you think of these screenshots? Do you like the new design? Be sure to let us know your thoughts in the comments section down below. 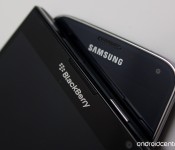 Samsung may extend its current partnership with BlackBerry, but won’t buy it

The head of Samsung’s mobile phone division stated today that the company could extend its current partnership with BlackBerry. However, he repeated what the company said last week that Samsung has no plans to acquire BlackBerry itself.


Google’s latest Nexus tablet, the Nexus 9, has been around for a while now, and Google has always been great about supporting their devices with official accessories. Today, we’ll be taking a closer look at two of the official protective cases and covers available for the Nexus 9, the Magic Cover and the Keyboard Folio Case!

Starting with the Magic Cover, it is flat rectangular magnetic attachment cover that can be attached to the front or the back of the tablet. When attached to cover and protect the display, the cover also supports automatic wake and sleep functionality, with all you needing to do is to open or close the cover.

The magnets do a great job of holding the cover in place, but an important point to mention is the fact that the cover features two different materials on both sides that adhere differently to the screen. One side has a hard rubber-like material that offers more grip, and holds itself to the screen a lot better. On the other side is a softer, more suede-like material, that makes the cover more prone to sliding around, which does create issues with the cover shifting out of place.

What makes the Magic Cover unique is its origami-inspired design, that lets you fold the cover into a stand, with one option allowing for a steep angle, which is perfect for media consumption, while another allows for a much shallower angle, which is useful for pretty much anything else you might be using the tablet for. If you have the case on the back, it will cover up the camera, but a nice touch is the fact that just raising the corner flap will directly start the camera, allowing you to take a quick shot.

The Magic Cover is available directly from the Google Play Store for $39.99, or at a slightly discounted price from Amazon, with the available color options including black, limestone, coral amethyst, and mint indigo.

The Keyboard Folio Case not only offers a lot more protection for your Nexus 9 when compared to the Magic Cover, but also comes with an attached bluetooth keyboard to enhance your productivity. Like the Magic Cover, it uses magnets to latch on to the tablet, and the material on the outside is soft and offers a lot of grip, which feels great and in the hand, and makes it easy to hold.

As mentioned, the keyboard pairs with the Nexus 9 via Bluetooth, and establishing the connection is simple, and doesn’t take too much time. The typing experience is quite good, with their being no latency whatsoever while I used to type in Google Docs or to reply to email or instant messages. It is a bit cramped, because after all, it is a keyboard made for a device with a 9-inch display, but the overall experience has been pleasant so far.

Despite its compact nature, the keyboard also includes some extremely useful shortcuts, like a dedicated emoticon key, and a search button that lets you conduct searches no matter where you are in the OS. Other shortcuts including tapping Alt and Tab at the same time to open the Overview screen, along with pressing the search button and enter simultaneously to quickly take you back to the main home screen. The keyboard can also be used to navigate around the OS, but the process is rather slow, and using the touchscreen is still the better option.

The keyboard can be charged via microUSB, but you may not have to charge it often, with Google claiming that with up to 2 hours of usage a day, the keyboard can last for as long as 5 months on a single charge. Testing this out hasn’t been possible since I’ve only had the case for a few weeks, but I haven’t had to charge the keyboard yet following the first time after receiving it.

The Keyboard Folio Case for the Nexus 9 is priced at $129.99, available directly from the Google Play Store, or at slightly discounted price from Amazon, with the only color option being black.

As is the case with most official accessories, the Magic Cover and the Keyboard Folio Case are at the higher end of the price spectrum. That said, the Magic Cover is certainly a very unique take on the traditional smart covers we’ve seen so far, and offers some nice functionality, and the Keyboard Folio Case provides a great typing experience with an impressive battery life, along with good protection for the tablet. While expensive, both these cases are definitely reliable, high quality products.

The design-focused Infobar A03 smartphone is headed for Japan

We haven’t seen a new Infobar device come from Japanese carrier KDDI since early 2013, but that’s for good reason. The carrier has just introduced their followup to their most recent Infobar handset, the A03. This Kyocera-made Android device is made of anodized aluminum and totes a 4.5-inch 1080p display, 13MP rear-facing camera, 2GB of RAM, a 2020mAh battery, 16GB of internal storage with microSD expansion up to 128GB and a 2.3GHz Snapdragon 801 processor. It’s also comes with IPX5/8 waterproof and IP5X dustproof resistance, and it’s available in four different colors: Nishikigoi (Red), Pool (Blue), Mocha Brown (Brown), and Sakura Iro (Pink).

The device is running Android 4.4 KitKat, but you likely won’t be able to tell. One of the aspects Infobar devices are known for is their software overlay, and the A03 is no exception. It’s running “iida UI”, which was debuted back on the first Infobar smartphone, the A01. The skin is designed by Yugo Nakamura, an award-winning artist and designer, and looks like a hybrid of Android and Windows Phone software.

The A03 is absolutely a handset made with design in mind. The company didn’t stop there, though. Maria Dahlgren, a stationary and graphic designer, and Akira Minagawa have made a line of stylish cases for the device. The company even had furniture-maker Maruni make a wooden dock for the phone, which looks like it would be perfect for a bedside table. If you’re looking for a design-focused handset with a ton of premium accessories, this may be worth looking in to.

The Infobar A03 will be available sometime in mid-February, though we’re unsure of the exact date. The price and compatible regions haven’t been made public either, but we’ll let you know if we hear anything else on the handset. Anyone out there interested in the Inforbar A03?

The digital world is a big one that requires movie studios, music labels and print publications to eventually embrace or face their end. Bringing content directly consumer devices is the trick. While I personally still like physical magazines for many situations, it certainly isn’t something you find sitting around on coffee tables like they did […] 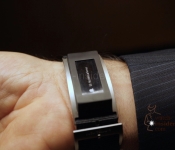 Luxury watch maker Montblanc earlier this month announced the “e-Strap”, an accessory band that will add notifications, music control, and other smartphone-connected functions to a traditional analog wristwatch, marking one of the first efforts by traditional watchmakers to offer smartphone integration as the Apple Watch’s launch nears.

Alexander Linz of the Watch-Insider blog had the opportunity to examine the e-Strap first hand during a demonstration by Montblanc CEO Jerome Lambert that was held over the weekend in Geneva.

Detailed photos of the watch accessory reveal how it sits on a traditional watch band to rest firmly on the underside of the wrist. The display portion appears rather bulky, making discomfort a possible issue during daily use.

Other photos showcase the 0.9-inch monochrome touchscreen display which shares information such as incoming phone calls, upcoming appointments, and more. The display quality is not nearly as good as depicted in Montblanc’s renderings of the strap, with text and icons appearing rather jagged due to the low 128 x 36 resolution.

Not a standalone device, the e-Strap will connect to an iOS or Android smartphone via an app that will allow users to customize the information being displayed on their wrists.

The e-Strap is expected to cost 250 euros and will be available as an optional accessory to select Timewalker Urban Speed watches. The e-Strap also may be compatible with other Timewalker watches that ship with a 42-mm or 43-mm wide band.