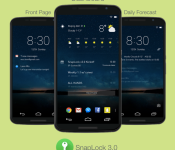 Snaplock, an acclaimed lockscreen app for Android, has just been updated to its version 3.0 which takes productivity to a whole new level. Earlier in v2.0, they introduced the App Rhythm functionality which basically recorded your app usage patterns at different times of the day and presented you with the most appropriate apps on the lockscreen itself.

Now they have rolled out v3.0, which shows off the new Dashboard.

Dashboard is a one-stop management tool for a screenlock that allows you to access the Dashboard from your lockscreen by swiping right. Dashboard shows you your upcoming calendar events, weather forecast and some apps that you are likely to use. Yes, the App Rythm has been shifted inside the Dashboard. Not by much but yes you now have to take one step more to access your favourite apps.

The front page now shows you the weather forecast along with the notifications. You still have those good options like swipe right to directly open the notification and swipe left to dismiss it. In nutshell, it was a worthy upgrade from the previous version. I am pretty satisfied for a lockscreen and more because it has great customizability and doesn’t impose you to keep things a certain way. 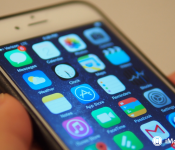 Apple’s Games For Kids section launches in the App Store

Apple has launched a new section of its App Store called Games for Kids, with a selection of iOS games that are made with a child audience in mind

Some of the apps that are listed in the Games for Kids store include LEGO Ninjago Rebooted, Club Penguin, Thomas and Friends: Lift & Haul, Slides & Ladders and Little Things Forever. It would appear that Apple is trying to offer a one-stop shop for kid-friendly apps as a quick way for parents to check them out and see if they are appropriate for their children. 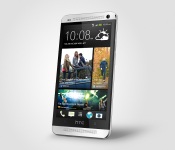 The time for HTC to push out the Android 5.0 Lollipop to the masses must be nearing, because images keep appearing online. Today, we have something better than a few pictures, we have a live video of the HTC One M7 running the latest version of Android.

The YouTube user, who’s name is 雷禪 (Ray Chan), posted this video of his device running Sense 6.0 on the top of Android 5.0 Lollipop. HTC is expected to release the latest version of Android to their HTC One devices within 90 days of the official release; we are closing in on that deadline so expect more videos and pictures to emerge. The video can be seen below.

The rumors were true, the Windows Central podcast made a triumphant return at CES 2015! Or more technically, the Windows Central Podcast debuted with episode 1, or something, since we’ve not got together since the site rebrand. Either way, we were in Las Vegas, we had a bunch of cool cameras and a stage, so broke out the podcast.

Meet the company that brought ‘Ebola’ to CES

Every year, CES manages to bring thousands of exhibitors to Las Vegas, spreading them across the Las Vegas Convention Center and throughout hotels like Mandalay Bay, Sands Expo and The Mirage. For members of the media, the abundance of companies at the show makes the task of keeping up with every one of them extremely hard — but it must be done. Exhibitors, on the other hand, have to reach out to journalists and host press conferences in hopes of getting valuable airtime for their product, whatever it may be. Naturally, due to the madness that is CES, smaller companies have to get creative to compete for attention with the tech giants of the world, such as Samsung, LG, Sony and more. And it helps tremendously if their product is, you know, actually good.

So, when we got an email with a subject line that said, “WakaWaka Brings Ebola To CES,” we instantly took notice. According to recent statistics, Ebola is estimated to have infected more than 20,000 people worldwide, the majority of them in West Africa. To date, the deadly virus has taken roughly 8,000 lives. At first glance, you think, “Are they seriously using a disease for promotional purposes?” Indeed, the company behind it, WakaWaka, wasn’t really bringing Ebola to CES, but that’s quite a bold way to approach pitching a story to journalists and other CES attendees.

In fairness, once you get past the sensational subject line, the company is actually doing something really great. With its WakaWaka Power+, it recently adopted a buy-one-give-one model — similar to how Toms donates a pair of shoes to people in need for every one that gets sold. The Power+ is a solar-powered portable charger that sells for $79, featuring a 2,200mAh battery that gives you up to six hours of extra energy. The 1,050-milliwatt SunPower cell on the device can get a full charge in 12 to 24 hours, which allows it to power two built-in LEDs and to send a charge out by way of USB. Here’s what WakaWaka does: For every unit it sells, it matches the purchase and sends one to people who don’t have access to electricity. This buy-one-give-one initiative will affect people in various places around the world, including Sierra Leone, Siberia and refugee camps in Syria.

During CES, WakaWaka’s goal was to expand its efforts in West Africa, where the Ebola virus has been spreading at alarming rates. Thanks to the LEDs found on the Power+, medics providing relief to people infected with Ebola are able to have a source of light that otherwise wouldn’t be there — according to WakaWaka, more than 90 percent of people in Liberia and Sierra Leone are without power every day. With that in mind, the company launched an Indiegogo campaign earlier this week to bring awareness to this issue. The project has since met its crowdfunding goal of $5,000, and there’s still time to contribute. Altogether, not counting its most recent Indiegogo page, WakaWaka says it has had an impact on 650,000 people worldwide, with more than 400,000 units sold.

Now, was the idea to tie Ebola to its product opportunistic? No doubt. Still, WakaWaka says it doesn’t regret making the bold decision to send that email. “You have to really go out of your way to bring in attention to your product,” WakaWaka Founder and CEO, Camille van Gestel, said when I asked about why he felt the need to claim they were “bringing” Ebola to CES. “There’s a lot of media attention around the world and Ebola disappears to the background, when we haven’t seen the peak of this virus.”

Not surprisingly, there were people who received the email that didn’t take Ebola’s mention in it lightly. While not all replies were negative, we managed to compile a couple of the least appreciative that were sent to WakaWaka. “I don’t know what WakaWaka is but this is horribly tasteless,” read one of the emails sent to the company. Another reply called WakaWaka’s email “pompous.” The same person who wrote that said, “I remain disgusted that you climb upon Ebola to sell products,” after a representative tried to explain in detail what it is the company was trying to do.

At the end of the day, van Gestel said it was worth it, adding that the response during CES has been tremendous. “If you really want to make an impact, there [are] always people who want to challenge it,” he said. “We are not abusing it [the Ebola term] to make money; we are using it to make [an] impact.”

“It’s important for us to see this through until we meet our mission to provide power to 1.2 billion people,” van Gestel stated.

Burger King is offering free smartphones through its mobile app

In an effort to increase awareness, gain more attention and draw further interest towards its new Android application, Burger King has today announced that it will be offering a selection of mid-range smartphones completely free of charge on a 2-year contract through US carriers Sprint and Verizon.

The selection of handsets is somewhat limited, though. At this precise moment in time, customers have he option to choose from either the Samsung Galaxy S4, HTC One (E8), LG G3 Vigor, HTC One Remix, and LG G2.

Here’s what Burger King had to say regarding the promotion:

To celebrate the release of the new Burger King App for Android we have a free Android smartphone offer. Pick a phone, with a new or upgrade 2 year activation and start redeeming your offers in the Burger King App.

If you want to take advantage of this offer, hit the source link below to install the Burger King app on your smartphone or tablet.

Come comment on this article: Burger King is offering free smartphones through its mobile app

In a couple of weeks time, HTC will begin pushing out the eagerly-awaited Lollipop update to all unlocked variants of the One M7 and M8 located in Asia and Europe. However, a lucky user in China called 雷禪 has already received the upgrade on his device and has taken to YouTube to share it with us.

Hit the break for the full video.

New to Windows Phone? Here are three must have photography apps

Luckily, most of the titles in the Windows Phone Store are capable photography apps. For those new to Windows Phone, it may be tough to figure out where to start building your photo app collection. This week’s roundup highlights a small group of apps that I think any Windows Phone shutterbug should have installed on their Windows Phone. They aren’t the only game in town but for me, they are at the top of the list.

New to Windows Phone? Here are three must have photography apps

Luckily, most of the titles in the Windows Phone Store are capable photography apps. For those new to Windows Phone, it may be tough to figure out where to start building your photo app collection. This week’s roundup highlights a small group of apps that I think any Windows Phone shutterbug should have installed on their Windows Phone. They aren’t the only game in town but for me, they are at the top of the list.

Watch us play Flockers on Twitch tonight for a chance to win your own free copy!

Every weekend, Windows Central streams an Xbox One game or two on Twitch for 1-2 hours and gives out free games to the cool people who join us during the stream. Last week, we streamed Defense Grid 2 and Funk of Titans and dished out codes to 12 lucky viewers.

Tonight, we’ll be playing Flockers from Team17. Flockers is a humorous puzzle game starring hordes of hapless sheep. We want you guys there, chatting along. So we’re giving out six Xbox One codes, plus several Playstation 4 and Steam codes!

Just follow me on Twitch.tv/Eastxtwitch, watch along, and participate in chat for your chance to win. You can also watch the event right here live or after the fact.