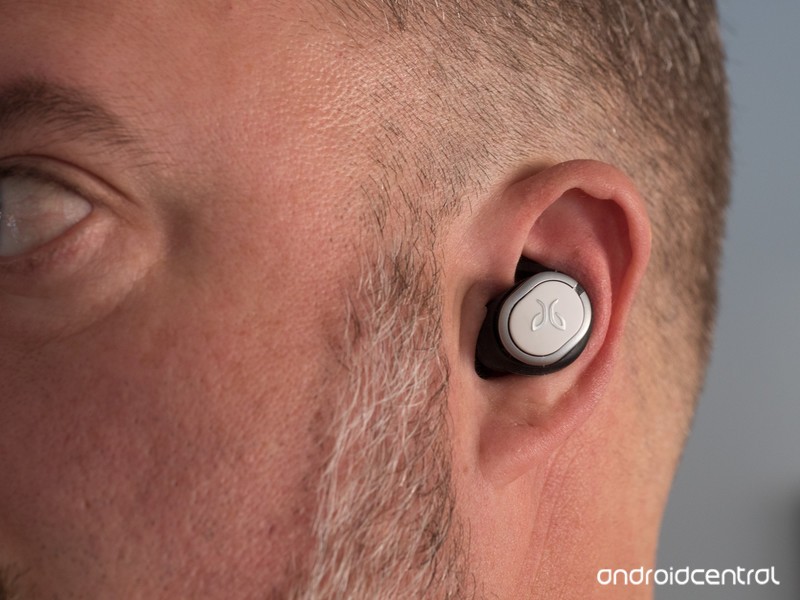 They fit well enough, they sound good enough, and I don’t have a wire dragging across my neck.

You wouldn’t think a little wire connecting one earbud to another would bother you that much. And, OK, it didn’t bother me that much. But it’s also the sort of thing that you definitely notice once it’s gone.

That’s my big takeaway from a few weeks wearing the Jaybird Run wireless earbuds. Truly wireless, as in one bud goes in one ear, and the other bud goes in the other. And there’s nothing connecting the two together. Just the faint hum and the slightly stale stench of Bluetooth going from the side of your head to your phone, and back.

OK, that last part may just be my heavy metal-abused ears trying to tell me something. But the simple fact is I’ve gone totally wireless with my workout buds, and I’m damned glad I did. 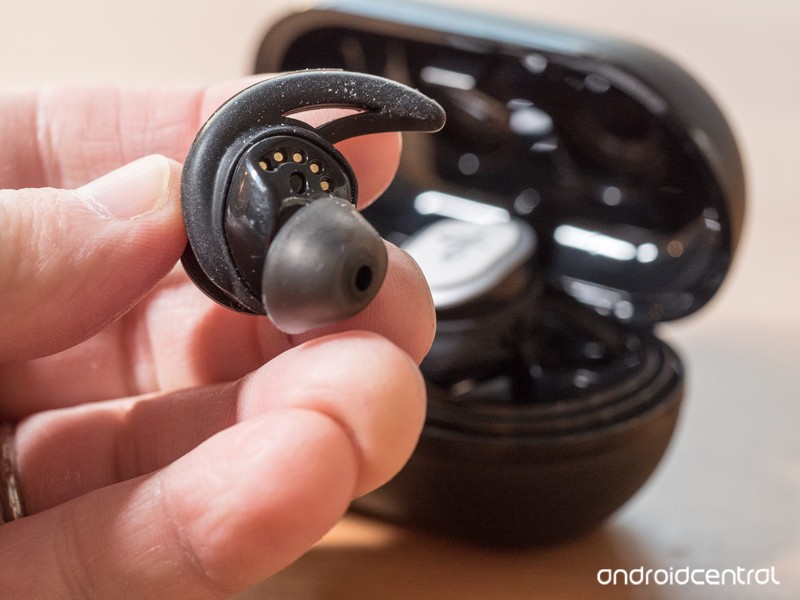 The Jaybird Run earbuds in their charging case. ($179 at Amazon)

First, an admission: The Jaybird Run buds weren’t the first I went to. For that, I snagged a $99 kickstarter special on the (regularly $150) Zolo Liberty+. But Jaybird has something Zolo doesn’t — replacement parts. I mention this up front because it (tragically) should be an important consideration when buying little earbuds like these. More on that in a minute.

If you’ve looked at Bluetooth earbuds of this ilk, you’ll know what to expect. Individual buds that aren’t much bigger than, say, oh, an earbud. They’ll be a little larger than something wired, that’s for sure. Because each one needs its own battery and radio and whatever other electronics they can add in there. And that means they’ll stick out of your ears a little more than maybe you’re used to.

But that’s the tradeoff. And I’ve found that it’s not one that’s bothered me in the slightest.

These are decently comfortable earbuds. Your ear canals will be different than mine, though — and it took me a little mucking about to find the best fit. I ended up swapping the tips for the smaller option, and I went with a different size (and style) fins — the little rubber spring-type things that help hold the buds in your ears. It still takes a little finagling to make sure they’re securely stuck in my ears. But once in they held up fine for light running, and hours on the elliptical. This part is key: Try the different sizes of tips and fins to find which works best for you.

Jaybird includes two sets of oval tips and two sets of round, and you’ve got four size options for fins — and a cool little pouch to hold everything. That’s a very nice touch.

As you’d expect, these aren’t all-day earbuds. I’ve been burning through about 30 percentage points of battery every 75-minute workout. That’s with only listening to music, and not messing around with the earbud controls at all.

The buds come in a little pill-shaped charging case. When you’re not using them, you’ll want to put them in there. First, it’s how you’ll charge them. The Jaybirds go in and come out easily enough, so no worries there. They also turn on and turn off automatically when removed and placed back in the charger. That’s a nice, simple way to handle that. But it also means that if I take them out of my ears for a few minutes — say, when walking through the gym after a workout — I have to remember that there’s still an active Bluetooth connection, and my phone won’t be making any noises or anything. That’s a small concern, though.

The official battery numbers are 4 hours of use at a clip, and the charging case can give two full charges. (It takes 3 hours to fully charge the earbuds.) If the buds are dead, a mere 5 minutes of charging will give you an hour of playback time. The one quirk to all this is that the charger — which (ugh) uses microUSB — doesn’t like charging from anything over 1 Amp, and that means basically any modern phone charger. (For instance, it won’t charge from my car charger.) Jaybird recommends something more low-power, like from a computer. The lights on the front of the charger — there are individual LEDs for each bud — turn red when things are running low.

In any event, I return the buds to the charging case when I’m done using them, every single time I use them. That’s as much to ensure that I don’t lose them as it is to make sure they’re charged. I’ve had to charge the case every few days. This will all depend on how much you’re using them, of course — this is just how I’ve been doing it.

That’s all fine and dandy. But how do they sound? Not horrible. I mean, they’re small, wireless earbuds. I’m not expecting perfection here — just enough to comfortably get me through a workout. And changing the tips and fins definitely affected the sound for me. It went from extremely compressed to something more-than acceptable from this sort of earbud. They block out a little more outside sound than I’d like, and there’s no option for any sort of “transparency” mode. If you need to hear what’s going on around you, Jaybird recommends just wearing the right (as in not-left) earbud only.

And you can customize the EQ through the Jaybird MySound app, available on Android or on iOS. You also can use custom EQ presets from various athletes and other folks. But I don’t know why you would.

I haven’t had any issues with interference. Jaybird recommends keeping your phone on the right side of your body — the right-side bud does the real work here. But I keep my phone on the left, and I’m too old to change such habits. I also don’t really mess around with the touch controls. You long press to turn the buds on or off (but I just stick ’em back in the case to do that). A single press on the left fires up your phone’s assistant, and a single press on the right is play/pause. 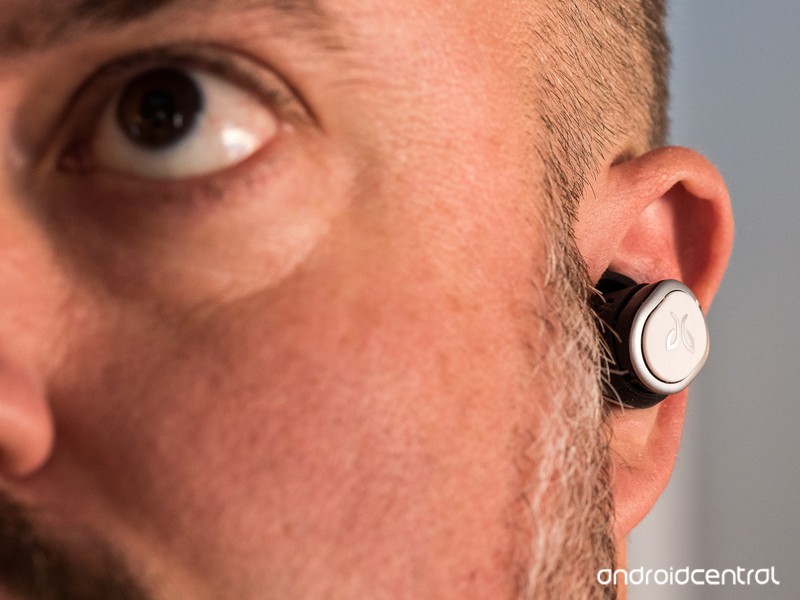 The big deal for me here are the fit, and the sound. And the Jaybird Run earbuds work pretty darn well, and for under $200. (That’s my sort of self-imposed limit for this sort of thing, which I use at least four times a week, but only for an hour or two at a time.) Again, if you get these, you’ll want to take a few minutes to try the other tips and fins to get the best fit. And then mess with the EQ to get the best sound.

But the other big deal for me is that Jaybird sells replacement parts. You can get a spare (or replacement) charger for $69. Or new tips and fins for a mere $9. Or a replacement earbud for $59. That’s some nice insurance for an $180 investment. (If you didn’t bother clicking through, my Zolo Liberty+ experiment came to a crashing halt when someone stole my empty charging case, and I can’t buy a replacement charger without paying the full $150 for new buds.)

Maybe that’s a small thing. But I found out the hard way just how important it can be, and it’s what led me back to Jaybird.