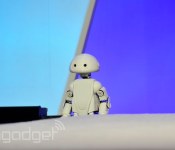 Intel CEO brought a robotic companion named Jimmy with him on stage at Code Conference today. Jimmy is a 3D-printed robot capable of walking, moving his arms, dancing and even tweeting, and it’s the key to Intel’s vision of the future of robotics. Starting later this year, the company will make an open source 3D-printable robot kit available to consumers for $1,600, with a research version for $16,000. The former will run on Intel Edison, the company’s computer-on-a-chip, while the latter will be powered by a Core i5 processor.