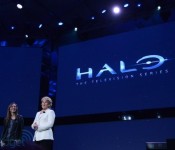 It’s been almost a year since Microsoft first announced its live-action Halo TV series, but the amount we know about it hasn’t exactly changed that much. That stops now, as we’ve learned that Redmond and premium network Showtime are deep in talks to tag-team distribution, according to a recent Variety report. Apparently, the program is scheduled to debut first on the cable channel and then become available on the Xbox platform with “enhanced interactivity” of some sort. A deal with a pair of showrunners is also close to being locked, as Variety tells it, which indicates that at least some progress has been made toward moving into production. With this not surfacing during Microsoft’s original-programming focused event earlier this week, though, it’s possible that we could hear new details (or maybe even see some video evidence) of the Spielberg-produced drama come E3.

Another day another G3 leak.  This time we get a glimpse of the front of the soon to be announced G3 from LG.  A few days ago, we were able to bring you a pic of the back of the phone.  Today, courtesy of Phandroid, we have 2 more pics to keep you salivating over this beauty.

Looking at the new frontal photo, it seems that LG is sticking to it’s almost edge-to-edge display made famous by last year’s G2.  We are expecting a display resolution that puts others to shame, squeezing 2560 x 1440 pixels into a 5.5 inch package.

We have now seen the front and back of the device along with parts of the new UI, but I’m sure LG has been able to keep a few goodies a secret.

This is NASA’s new Z-2 spacesuit

The follow-up to NASA’s rather Toy Story-esque Z-1 spacesuit was decided this week, thanks to an online poll. Three options were up for the task of being the next cover layer that will protect the Z-2, and after garnering 63 percent of the vote, the “Technology” option will be part of the agency’s new threads. An unadvertised underlying theme continues as renders of this suit certainly have a bit of a Tron aesthetic. Now, NASA engineers will move on to vacuum chamber, Neutral Buoyancy Lab, and rocky Martian surface tests which are all expected to commence this fall. There’s plenty of features that make this an improvement over previous models, so let’s take a closer look at the details.

NASA says that the biggest improvement for Z-2 suit is its hard composite upper torso, which will offer the increased durability needed for Extravehicular Activity (EVA).

For increased mobility, collapsing pleats allow the suit to fold, catering to an astronaut’s activity.

There’s also exposed rotating bearings and abrasion resistant panels along the torso of the suit to further improve wear, protection and mobility.

As mentioned, the testing phase — which includes buoyancy trials — is slated to begin this fall.

One of Time Magazine’s Best Invention’s of 2012, the Z-1 suit was the first to use 3D scans for sizing, a suit-port with a hard upper torso structure and, at the time, the most resizable space wear that had be developed.

[All images courtesy of NASA] 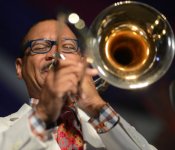 Recommended Reading highlights the best long-form writing on technology and more in print and on the web. Some weeks, you’ll also find short reviews of books that we think are worth your time. We hope you enjoy the read.

Over the course of centuries, our notions of sound and noise have changed dramatically, and technology has played a large part in that. Through the lens of a Bourbon Street uproar and the history of ordinances, The Atlantic’s Megan Garber hashes out the transformation. There’s a look at how municipalities might design urban areas to cater to the public’s varied sonic sensibilities and how appliances are built to sound a certain way when in use.

BMW’s all-electric i3 ready to roll in the US

At long last, BMW’s eco-friendly i-series cars are reaching US buyers. The automaker has delivered its first all-electric i3 models to a handful of Americans that include both loyal ActiveE driver Charles Rabie as well as Ashlan Gorse Cousteau, the wife of documentary maker Philippe Cousteau Jr. As the photo you see here would suggest, BMW is also close to rolling out “hundreds” of further orders to patient customers who’ve been waiting the better part of three years to see the EV become reality. The sportier (and wealthier) crowd will have to wait until September to scoop up the i8, but the i3′s arrival is good news if you have just over $41,000 to spend on tech-savvy, emission-free transportation.

Scientists confirm the existence of the heaviest element ever seen

It’s tricky to verify the existence of super heavy elements; you have to fuse very short-lived materials, hope you get some useful atoms, and wait for someone else to reproduce your achievement. However, scientists at a particle accelerator lab in Germany have managed that rare feat by creating and confirming Element 117, the heaviest substance observed so far. It was produced by smashing together thousands of calcium 48 and berkelium 249 atoms, and is about 40 percent heavier than lead.

Not that you’ll get to see the fruits of that labor in person. The team created just four atoms, and those examples decayed into other elements within milliseconds. Even so, that should be enough to get Element 117 both a proper spot on the periodic table and a better name than the rather awkward “Ununseptium.” The decay also produced isotopes of additional elements whose half-life could be measured in hours, which is exceptionally long — that suggests that there are undiscovered super heavy materials that could be relatively stable. 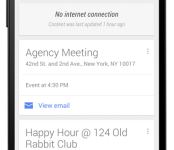 Google Now gains offline sync for those times without internet

Google Now has just had a major update to the way it works by gaining an offline sync feature allowing the service to be accessed at those times when you’ve got no internet.

Now live in the Google Play Store, the Google Search App will continue to function when accessing Google Now even without an internet connection.

Next time you’re on the subway and want to check on your day’s appointments with Google Now, you won’t have to worry about lack of cell service. Starting today (make sure you update your #GoogleSearch App for Android http://goo.gl/idgt3y) your Google Now cards stay loaded, even when you lose service in the subway… or your favorite underground bar!

So hit update and enjoy Google Now wherever you are.

The post Google Now gains offline sync for those times without internet appeared first on AndroidGuys. 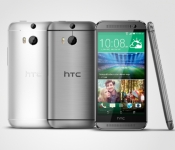 Give your HTC One M8 the Harman Kardon treatment

The HTC One M8 is a great device, contributed to by the BoomSound front-facing speakers HTC have implemented on the device, but Sprint subscribers have access to an enhanced version of the M8 that includes Harman Kardon audio tuning.

Now non-Sprint subscribers can enjoy the same enhanced sound setup thanks to the XDA Developer forums as a tweaked version of the HTC One M8 can be installed on any model to enable the feature.

You’ll need to root your device to do so, but if you’re interested hit up the source link to head over to XDA Developers to find out how.

The post Give your HTC One M8 the Harman Kardon treatment appeared first on AndroidGuys.

The ManDroid Show is up a little late today gang, but long as its here, who really cares, right? Motorola and LG have an event planned, and we are hoping they will dazzle us with some device amazement. The Amazon phone is actually looking pretty good, even though we still don’t need an Amazon phone. Enjoy the Show!

Earlier this week, you may have heard that Google launched two standalone apps specifically for Google Docs and Google Sheets. At the time, we were wondering whether this would cause any changes in Google Drive and today our questions have been answered. Today, Google Drive gets updated to version 1.3.144.17, and most crucially, requires that you download the Docs and Sheets apps to make changes to relevant documents.

This is probably a logical move to create separate apps from Google Drive to handle documents as Google Drive is increasingly being touted as Google‘s answer to cloud storage. In addition to this change, Google has also rearranged the slide-out menu to make it a bit more streamlined and accessible. For the full list of changes:

The update is rolling out now, however if you haven’t got the update yet and need to have the latest and greatest, we have the APK file available for download below: