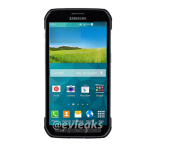 We’ve seen a few leaks of Samsung Galaxy S5 Active thus far, interestingly enough most of them happened within a week. First some pictures and videos leaked and not long after that some additional videos appeared.

This time around we have a press image of Galaxy S5 Active for AT&T, courtesy of @evleaks. We have a lot of info regarding this device thanks to numerous leaks in the last few days. Samsung Galaxy S5 Active is expected to feature a Qualcomm Snapdragon 801 chip along with 2GB of RAM, and a 16MP camera, basically a Galaxy S5 with some added ruggedness.

Is this device on your shopping list? Will you get it once it gets released?