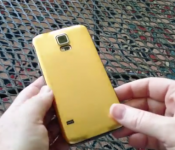 We’ve been hearing increasingly frequent rumours surrounding a possible Samsung Galaxy S5 Prime device, one that upgrades the original Galaxy S5 with a 2K resolution display and a Qualcomm Snapdragon 805 processor. There have also been rumours that this ‘more premium’ version of the Galaxy S5 would in fact be aluminium, and in a new video featuring what looks like a pre-production model of the device, it looks like an aluminium Samsung Galaxy S5 Prime is a decent possibility. Check it out:

As you can see from the video, the device is definitely made from aluminium, and definitely bears some very subtle differences to the original Galaxy S5. As the video mentions, this is a pre-production model which could mean the finished product may look slightly different to the one in the video. What’s interesting is the video is labelled as for both the S5 Prime and S5 Active as there have also been rumours swirling regarding a follow-up Active device; we’d definitely lean towards suggesting this is the S5 Prime as yesteryear’s S4 Active device has some very different bodywork compared to the Galaxy S4.

As a follow up to the above video, TKTech went on to examine the specs of the device in another video:

As the video seems to suggest, the device has a model number of SM-G906A which matches what we expected for the S5 Prime and interestingly the device is running Android 4.4.3. However, the device is apparently running a Snapdragon 801 and the screen resolution of the device is only 1920×1080, not 2560×1440 as would be expected from a 2K display. Something is definitely amiss with the pre-production device, however we’re not about to dismiss everything that we’ve seen in this video seeing as it is a pre-production model. We’re expecting to see Samsung launch the S5 Prime in June to combat the release of the LG G3 later this month, so we won’t have long to see what the actual device looks like if this all ends up true.

What do you think about the appearance of the aluminium Samsung Galaxy S5 Prime? Happy to see a metal body? Let us know your thoughts in the comments.