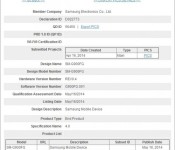 Devices that are often on the imminent path to release have to go though Bluetooth SIG certification, so it’s not unusual to see rumoured devices passing through Bluetooth SIG’s website on their way to market. Sometimes though, it’s hard to tell exactly what the devices are as they only bear model numbers in the database, and a certain SM-G900FG has perked up everybody’s attention. It’s been suggested that this device will end up becoming the Samsung Galaxy S5 Google Play Edition that we’ve assumed is coming ever since the Galaxy S5‘s launch.

While there’s no real concrete evidence to say that this device actually is the Galaxy S5 GPe, the two corroborating facts being used are the fact that the model number for the international Galaxy S5 is SM-G600F and that the Galaxy S4 GPe tacked a “G” at the end of the international Galaxy S4′s model number (i.e. SM-I9505G). The release of the Galaxy S5 GPe will likely be good news for those Android enthusiasts who are yet again disappointed by the bloated TouchWiz UI but want the hardware prowess under the hood.

Would you buy the Samsung Galaxy S5 Google Play Edition if/when it is released? Let us know your opinion in the comments.