Motorola’s G- and E-series smartphones have been the bedrock of budget phones for the past few years. This year, there’s plenty more competition to choose from, but many of our favorites still come from Motorola — ranging from the Moto G6 to the Moto E5 Plus. The latest budget addition we’re looking at is the cheapest phone the Lenovo-owned company has to offer, the Moto E5 Play.

You can’t buy the Moto E5 Play unlocked, but it is available at a variety of carriers including Verizon, and Sprint. Each carrier is charging a different price, from as little as $70 to $192. If it’s available at your carrier for under $150, and you don’t want to pay much for a smartphone, you should buy the E5 Play.

There are compromises — the camera isn’t great, and this phone won’t receive the upcoming version of Android. But with a full day’s worth of battery (that’s also removeable), a solid display, decent performance, and a nice design, the Moto E5 Play is a real bargain.

There’s nothing impressive or special about the Moto E5 Play’s design. It’s about as basic as a phone can look, with chunky bezels surrounding the screen on the front, and a textured, cheap-feeling plastic back.

Sitting up top is the front-facing camera and a flash, with the earpiece right in between. This is the only speaker on the phone, and while it sounds decent indoors, it’s easily drowned outside. A volume rocker is situated on the right side, and the power button is underneath it. 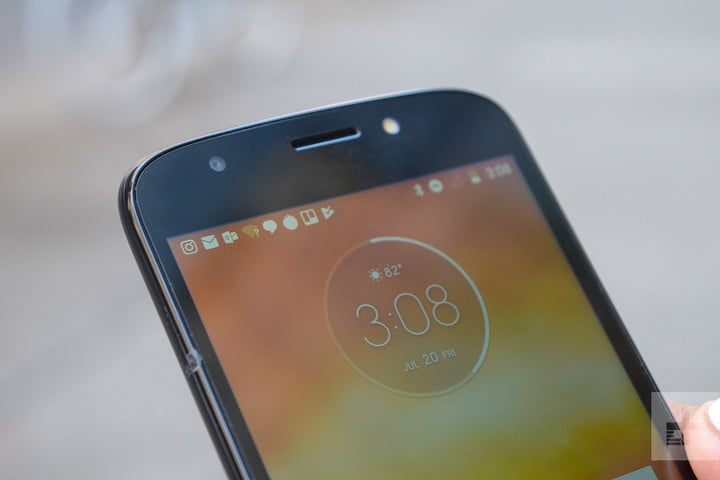 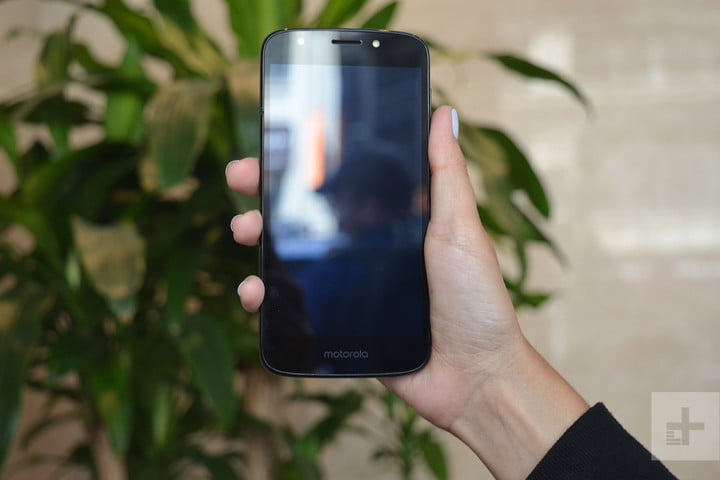 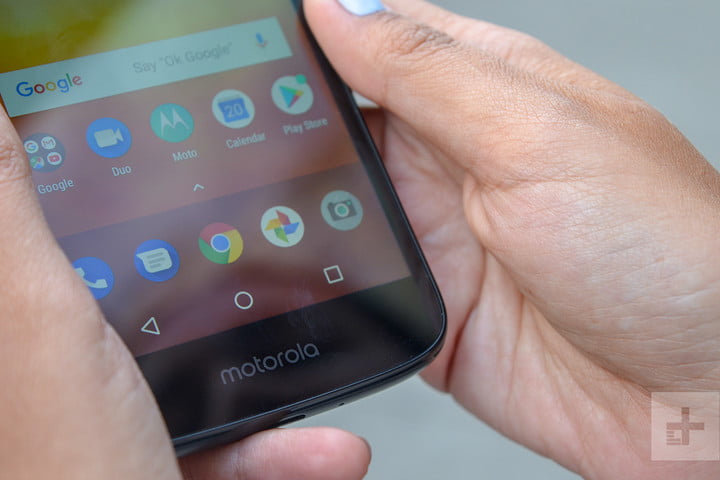 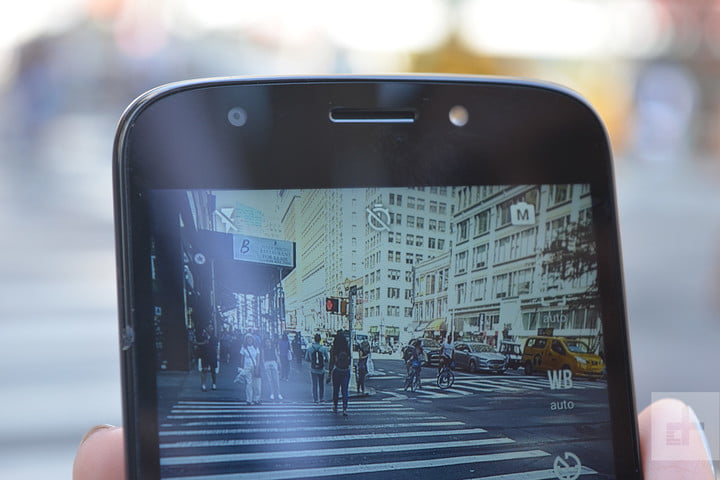 There’s thankfully a headphone jack at the top, and you’ll find a MicroUSB charging port at the bottom. We do wish Motorola went with the universal and convenient USB Type-C charging port, but the company confirmed to Digital Trends that all its 2019 phones will have a Type-C port.

The slightly curved edges help with grip, and the phone is lightweight, which helps make it comfortable to hold. Flip it around, and the back feels minimal and organized. There’s a circular single-lens camera module at the top, which sticks out from the back ever-so-slightly, and it also houses the flash. Below it is an indented fingerprint sensor, complete with Motorola’s logo.

There’s nothing impressive or special about the Moto E5 Play’s design.

The fingerprint sensor is placed in a comfortable spot, and it’s fairly responsive. You should know the Virgin Mobile, Cricket Mobile (Moto E5 Cruise), and Boost Mobile variants of the E5 Play don’t include a fingerprint sensor, which is disappointing.

We like how simple the back of the phone looks — the textured black pattern also adds a nice touch, even if it does feel cheap. You can pop the back on and off to access the SIM slot, removable battery, and MicroSD slot. Removable batteries are a dying fad with smartphones, but there’s still strong interest in them because it’s more convenient to swap out batteries instead of lugging around a heavy portable battery charger. That being said, we’ve yet to find a place that sells the Moto E5 Play’s battery.

The 5.2-inch LCD display on the front has a 16:19 aspect ratio with a 1,280 x 720 pixel resolution. The screen looks sharp and colorful, but we did have trouble seeing it outdoors in direct sunlight. We found ourselves often keeping the brightness on the higher side to comfortably see and read what’s on the screen. Despite the lower HD resolution, we didn’t have any issues or problems with video quality when watching movies and shows on the Moto E5 Play.

As for durability, there’s no IP rating for the phone so you’ll want to keep it away from water. Motorola does say there is a water-repellent coating for slight water exposure to protect it in the rain or from accidental spills. We did drop the E5 Play once on concrete (at a height of around 1 and a half feet), and the phone only suffered a minor ding on the side. Just to be safe, you’ll probably want to grab a case.

Performance is average — apps will open slowly, and there’s a bit of stutter when scrolling in apps like Twitter or Facebook. But moving throughout the user interface, like the Settings menu and the home screen, didn’t pose any problems or lag.

Here are a few benchmark results:

The Moto E5 Play actually scored higher than the Moto G6 Play (41,158 on AnTuTu), which is more expensive. Benchmark scores aren’t the best measure of real-world performance, though, and we didn’t run into any problems that would categorize the Moto E5 Play as unusable. We were generally able to complete day-to-day tasks without much frustration. It’s when you want to do multiple things within a short time period that the phone starts to frustratingly slow down. If you’re not a power user, we think you’ll be satisfied here. 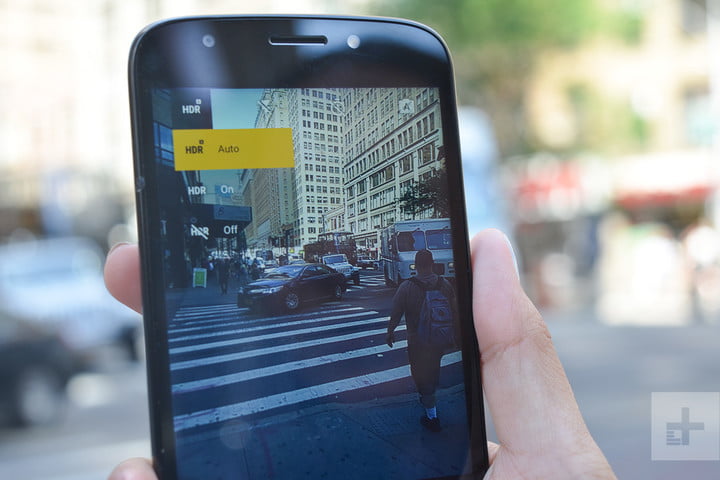 When it comes to gaming, we didn’t run into any major hiccups playing The Sims Mobile. The game did lag a little when swiping through different parts of the map, but the graphics look great and we were still able to enjoy the game.

There’s only 16GB of storage on the Moto E5 Play, which is easy to fill up in a short amount of time. Thankfully, a MicroSD card slot lets you add up to 128GB of additional storage if you need it.

The Moto E5 Play ships with Android 8.0 Oreo, and the only updates you can expect to see are for security. Motorola confirmed to Digital Trends that the Moto E5 Play will not receive Android P, so that might be something to consider before purchasing the device. Android P is the next version of Android that’s set to release around the end of August.

Regardless, the software experience is almost stock Android — uncluttered and simple to use. There’s very little bloatware, with just your standard suite of Google apps pre-installed, and you can swipe right from the home screen to access the Google Feed. Press and hold the home button to activate Google Assistant.

Not all the features are available here. We’re sad to see some of our favorite gestures not included.

There is the Moto app that’s standard on all Motorola phones, but not all the features are available here. We’re sad to see some of our favorite gestures not included — such as making a chopping gesture twice to turn on the flashlight, or twisting the phone twice to open the camera. You can touch the screen with three fingertips to capture a screenshot, put your phone face down to activate do not disturb mode, pick up the phone to stop ringing, and swipe down to the left or right of the screen to shrink the screen for one-handed mode. That’s about it. We didn’t use any of these features.

Thankfully Moto Display is available, so you can see notifications fading in and out of the lockscreen. There’s also access to the blue-light filter, and Attentive Display, which keeps the screen on while you’re looking at it.

As with most budget smartphones, the camera on the Moto E5 Play struggles in low-light environments.  The 8-megapixel rear camera does take passable photos in broad daylight — they can look a little flat sometimes — but there are some surprisingly good photos that come through. 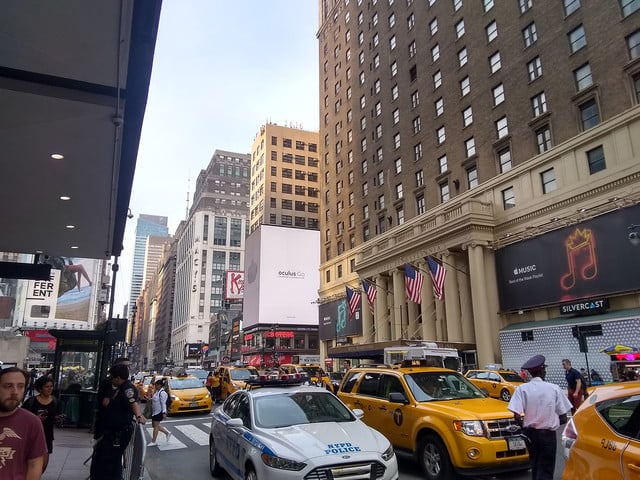 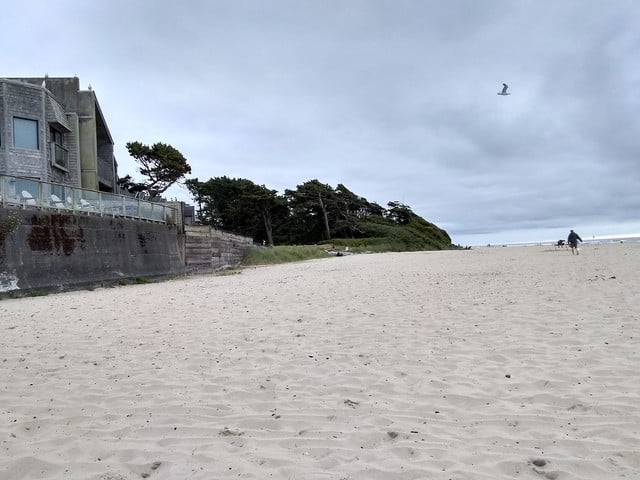 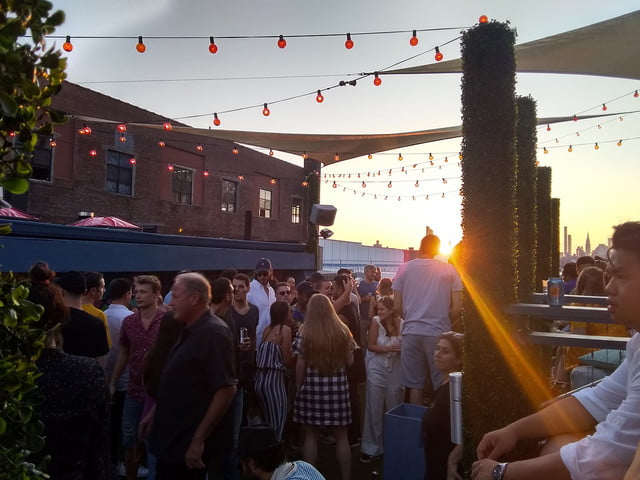 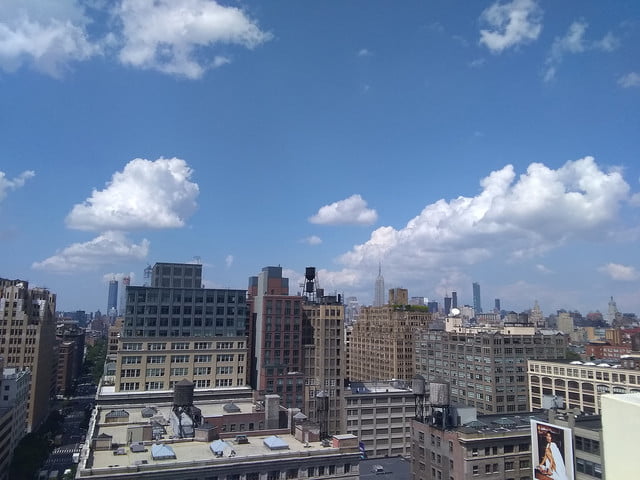 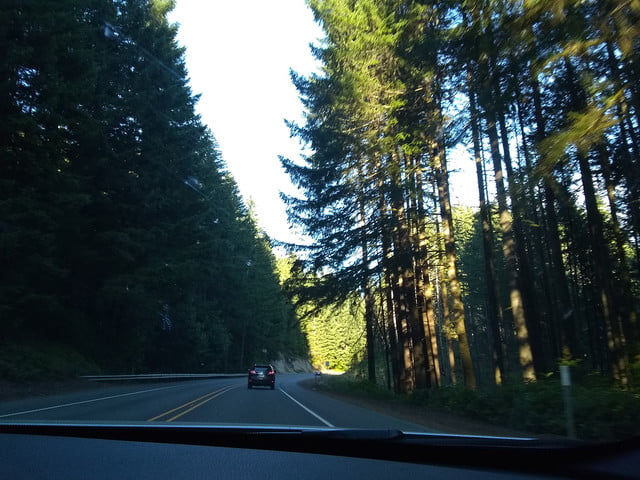 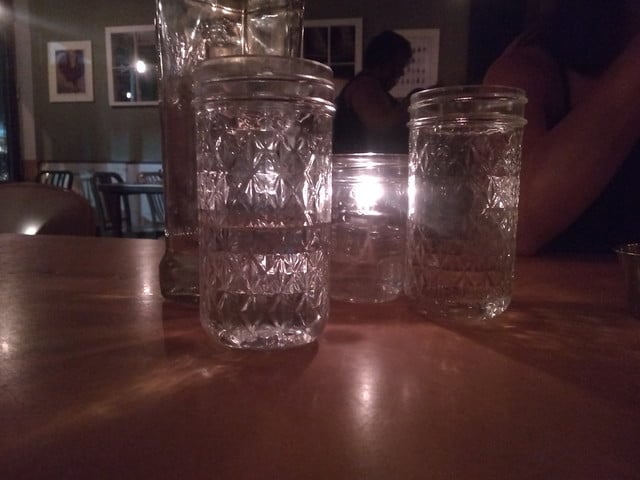 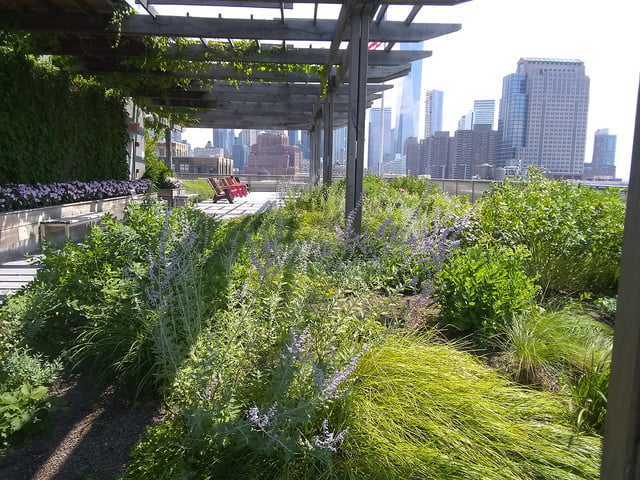 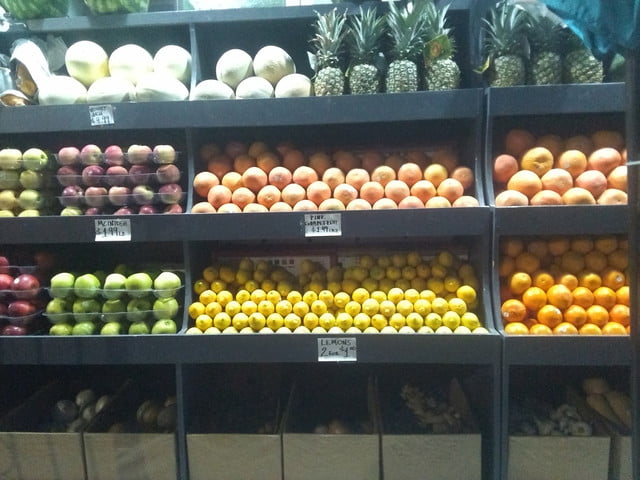 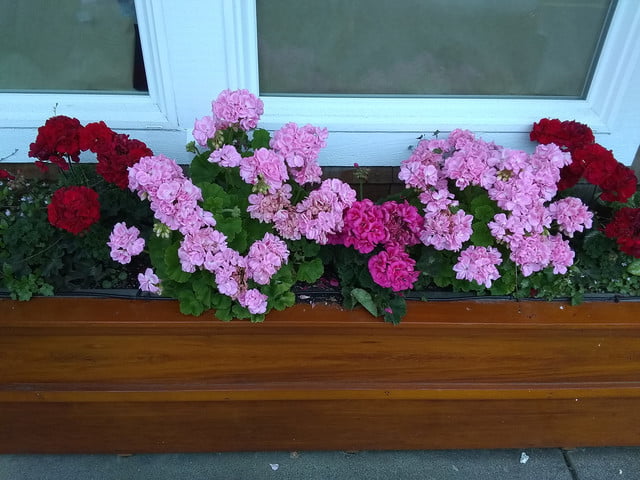 But as soon as there isn’t enough light, the camera drops in quality. Even an overcast sky is enough to make the photos look dull, grainy, and lacking in detail. Things get worse indoors with low lighting, as the results can often look unrecognizable — adding flash only makes them look worse and washed out. The option to adjust the exposure in the viewfinder didn’t make much of a difference. 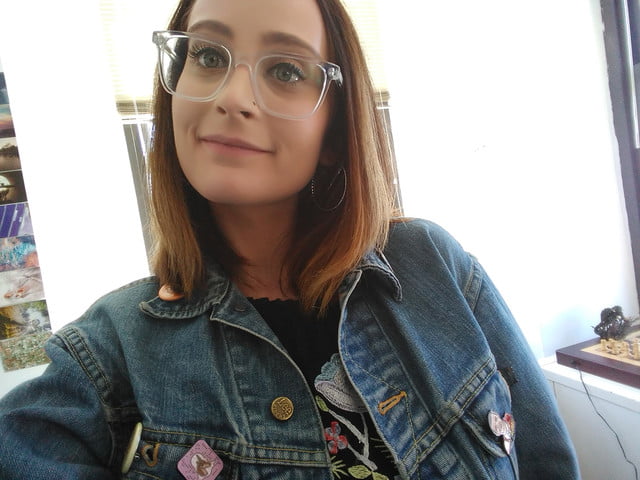 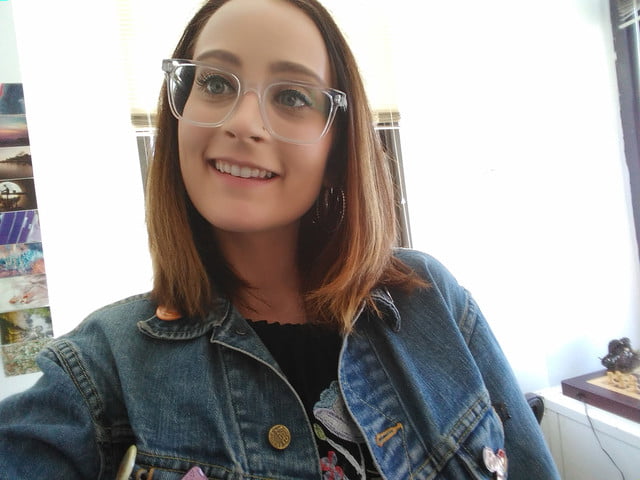 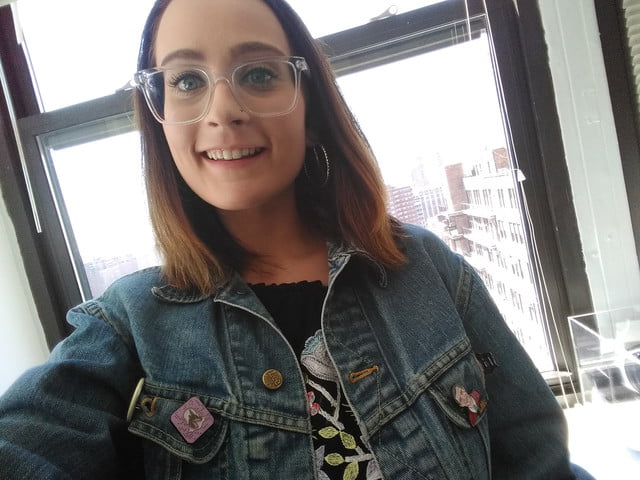 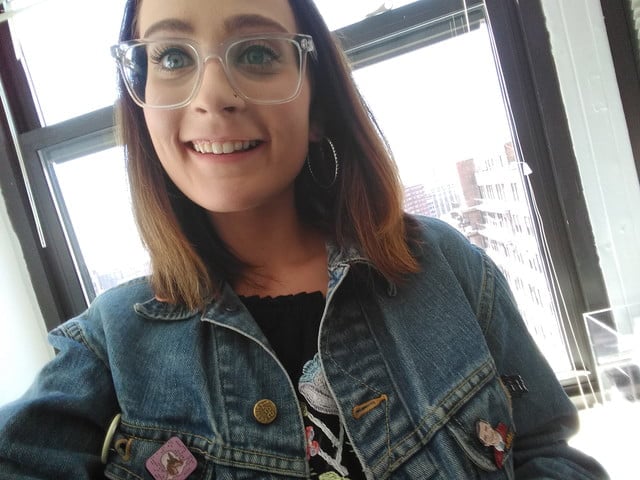 The 5-megapixel front-facing camera isn’t too impressive for selfies either. Look close and every photo looks blurry and grainy. The built-in Face Beauty feature also made us look strange — it seemed to have airbrushed not only our skin (to make us look more pale) but also our eyebrows and pieces of our hair. Not very flattering.

While the camera app itself is quick to open, we saw some lag when snapping a photo, which we’ve often found to be a problem on Motorola phones.

With a 2,800mAh battery powering the Moto E5 Play, we were able to get a full day out of the smartphone. This includes accessing email notifications, using social media and productivity apps, taking photos, along with text messaging. On average, we found that our device was at about 85 percent by noon (having taken it off the charger at around 8:30 a.m.), and by the end of the workday at 5 p.m., it was around 74 percent.

You don’t have to worry about it dying on you before the day is over.

By about 10 p.m., the phone hit 68 percent and that was after catching up on apps like Instagram, Twitter, and news on our commute home. With lighter phone usage, the phone could definitely last into the second day, so you don’t have to worry about it dying on you before the day is over.

It also comes with either 5-watt or 10-watt charger (depending on the carrier), which allows for better rapid charging capabilities.

The Moto E5 Play isn’t available unlocked yet, so you’ll have to purchase it through a carrier, where it varies in price. At Verizon, it’ll cost $70, whereas Boost Mobile sells it for $80. Under Cricket Wireless, it’s known as the Moto E5 Cruise, and it will only set you back $40, but you need to sign up for a new line or upgrade your existing device. By transferring your number, you could even get the device for free. 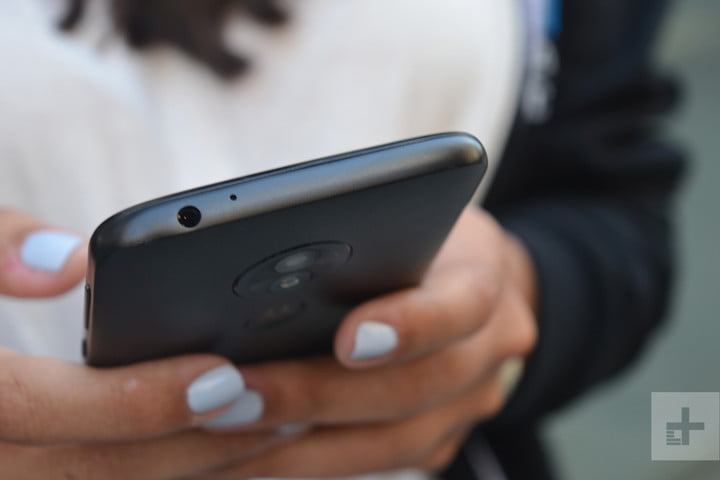 You can also purchase it from Best Buy — but it is a bit pricier — ranging from $95 to $130 depending on the carrier it’s locked in with. Xfinity Mobile sells it for $120, but it’s the most expensive on Sprint, which is carrying the phone for $192. Keep in mind that many of the more expensive versions have the Snapdragon 427 processor, which is slightly better. We don’t think the performance difference will be noticeable though.

For such a cheap price, the Moto E5 Play packs in all the basics you need for a solid smartphone experience.

Yes, if you’re eyeing a Moto E5 Play that’s more than $130, we recommend taking a look at the Moto E5 Plus. It has a massive 5,000mAh battery, more RAM, and a slightly better processor that should provide an overall better experience. It also comes with the useful Moto gestures.

Our favorite budget pick is the Nokia 6.1 for $270, with the standard Moto G6 following it swiftly behind. There’s also the Honor 7X worth considering, since it’s only $200. You can learn more in our best cheap phones guide.

The Moto E5 Play should last you around two years. Since it’s made of plastic, you don’t have to worry about shattering it compared to all-glass phones.

It might receive a few security updates, but this is the only Android version you will get, so you will likely want to upgrade yourself by the two-year mark.

Yes, but it depends on the price from the carrier. We don’t think it’s worth purchasing if the carrier is selling a model without a fingerprint sensor, or if it costs more than $130. Otherwise, this phone is a really good bargain.