PopSockets vs. Spigen Style Ring vs. Ringke Ring: Which grip is best? 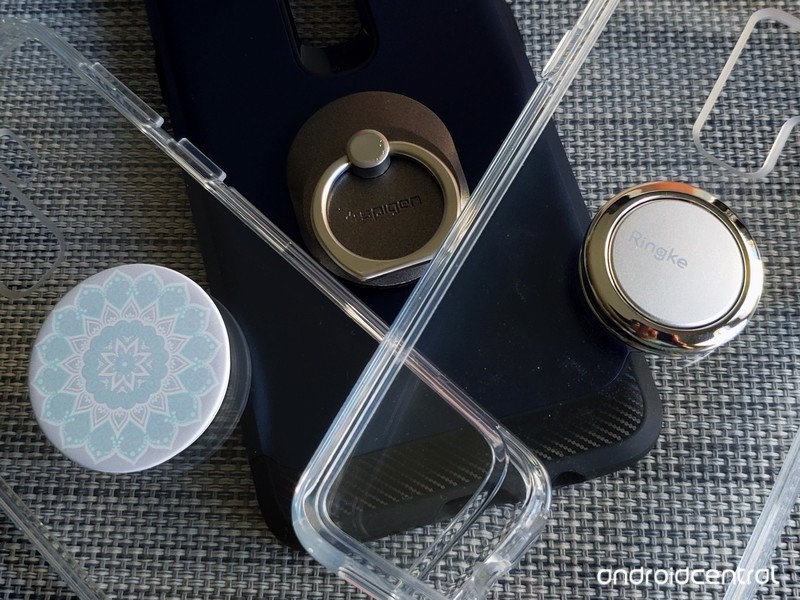 Sometimes you just need to get a grip on your phone.

We can white-knuckle grip our phones all day while we carry them around, but let’s face it: phones get slippery. Hands get sweaty. Sometimes we just need something a little easier to hold on to. Smartphone grips can help with this, as well as giving us an easy-access kickstand, a secure mounting solution, and even a little style. There’s a variety of smartphone grips out there, but a few styles have risen to the top — accordion-style PopSockets and two ring-based styles, the beefier Spigen Style Ring and the flatter Ringke Ring.

There are many solutions on the market to help us get a grip, but there can only be one on the back of your phone. So which one should you slap on yours? Accordions vs. bearings and hinges

PopSockets are perhaps the most recognizable smartphone grip on the market in hundreds of styles — including licensed versions featuring Star Wars, Harry Potter, Marvel and DC superheroes, and even My Little Pony. A PopSocket can be customized for company swag or personal pride, and most styles are $10-$15, depending on how fancy a design you get.

No matter the color or branding, all PopSockets use the same plastic assembly of “poppable” and collapsible levels to let you have the PopSocket at one of three levels: flat, halfway (one level popped open) and full (both levels popped open). There’s no adjusting the angle of your grip or kickstand here, but there’s also no bearings or hinges to wear out, either. A PopSocket’s plastic can wear out, but that’ll take tens of thousands of pops in and out. 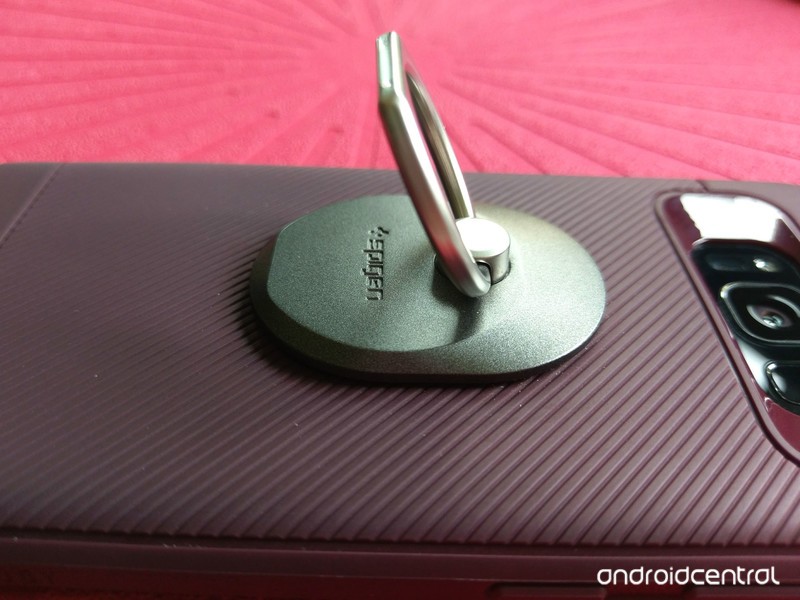 The original phone ring — the Spigen Style Ring — features a raised, 360-degree rotating center post and a ring that rotates 180 from it. It’s a bulkier grip, but one that’s easy to slide on and balance with one finger. The Spigen Style Ring also offers a very stable kickstand thanks to two rounded corners on its ring. Spigen’s grip works so well that the market is now filled with post-style grips in every conceivable color, size, and shape, from Batman logos to bedazzled rose gold rings. Whether original or knockoff, all post-style rings have the same repeated complaint: they don’t lay flat on your desktop or nightstand, and can rattle around when your phone rings on Vibrate. Spigen sells the Style Ring at $14 with one included wall/car mount. 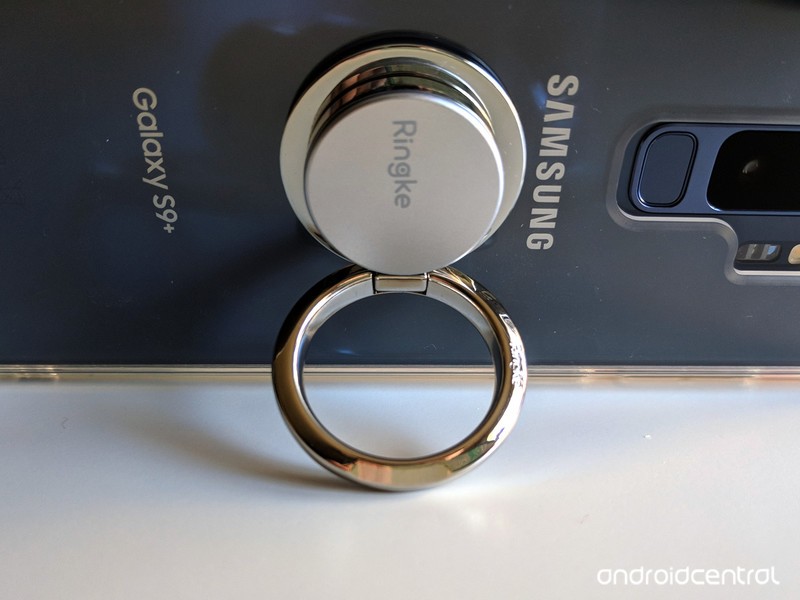 This complaint gave rise to the flat-style ring grip used by the Ringke Ring. Featuring a flat back, the Ringke Ring folds down securely around its circular base, which houses the bearing that the grip rotates 360 degrees upon. This keeps the grip at the desired angle for your finger, rather than being knocked or slipped back to straight as frequently happens with post-style rings. While a flat back doesn’t guarantee that the phone will actually sit flat on a table, the Ringke Ring won’t rattle around the way Spigen’s does.

Some flat-style rings slip a magnetic plate into this flat back so that they can be used with the ever-popular magnetic car mounts, but Ringke has not gone this route. Considering how quickly I’ve scuffed up magnetic versions of flat-style rings, I’m okay with the omission. Ringke Rings sell at $10 with two Ringke Hooks included in the box, which can serve as mounts for your ring or cable grips. 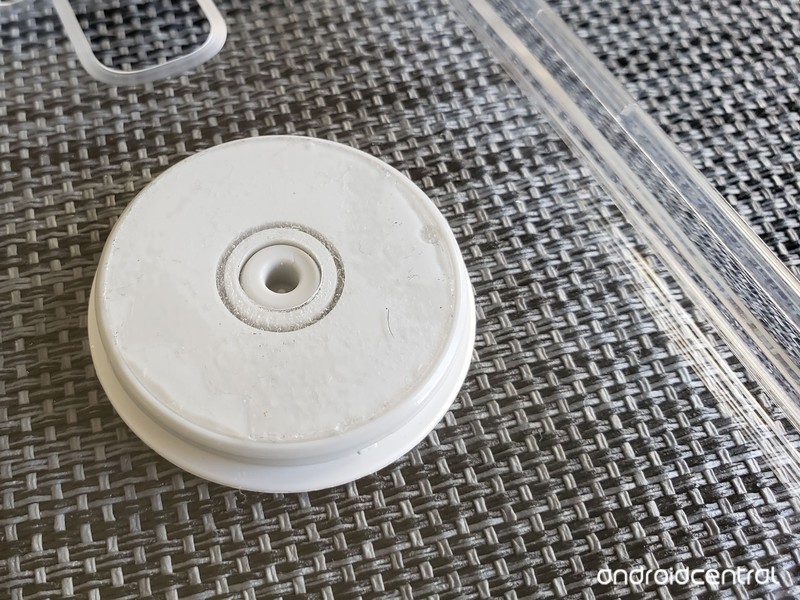 How your grip gets its grip

All three of these grips — nay, the vast majority of all smartphone grips — use 3M-style adhesives to stick to the back of your phone or phone case. While the adhesive doesn’t quite last forever, it sticks really well while leaving little to no residue when removed. If you need to reposition it once or twice, it can be moved between cases or between phones without losing its strong grip. The only drawback to these adhesives is that they have a tendency to not stick to a couple of styles of phone cases:

I’ve used these grips with some cases with shallow texturing, but other textured cases were just too uneven for the adhesive to get a good grip. As a general rule of thumb, if your case has a flat back and isn’t a softer/slipplier silicone, these grips should work just fine. 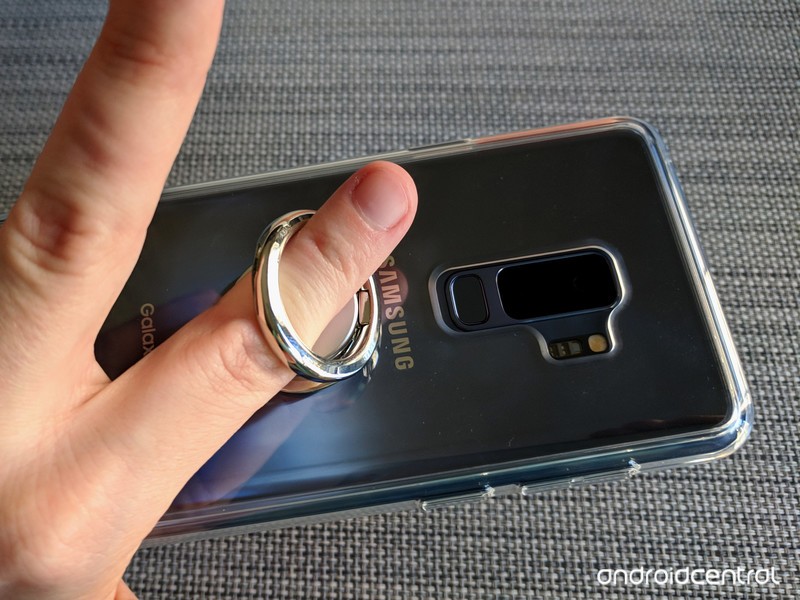 If you like it, then you shoulda put a ring on it

When it comes to holding your phone with one of these grips, the difference between the rings and PopSockets is clear: a PopSocket requires two fingers to grip each side of its accordion body, while the Spigen Style Ring and Ringke Ring has users slip one finger through the grip to keep ahold of your phone. 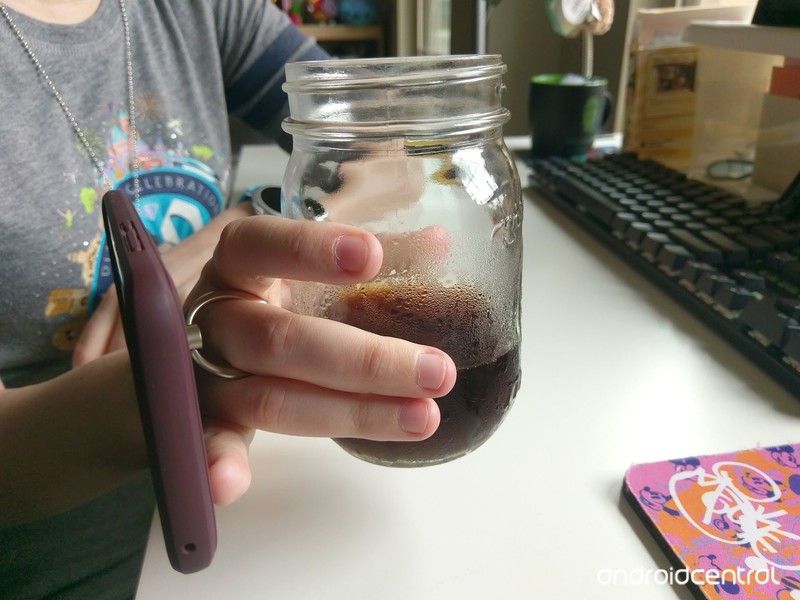 Ring grips take a little getting used to, but the grips you can get with them are more diverse and more secure. You can adjust the angle of the ring to reach a wider area of the screen, and you can swing the phone around 180 degrees to wear your phone like the biggest bling ever, allowing you to hold the phone on the back of your hand while you carry beers back from the bar. If your wardrobe is often lacking in phone-sized pockets, this can be a lifesaver. If you have thin, petite fingers, ring grips can feel huge, whereas a PopSocket’s halfway open mode can provide excellent grip. The fully open mode also keeps things grippy while giving you a little leeway in how closely you grip the phone, but the grip is still not as secure as those on the rings. PopSockets frequently double as a phone-mounted fidget toys for many users, allowing you to pop it in and out and wiggle it around between levels when you need distracting.

Not that I would know anything about that. 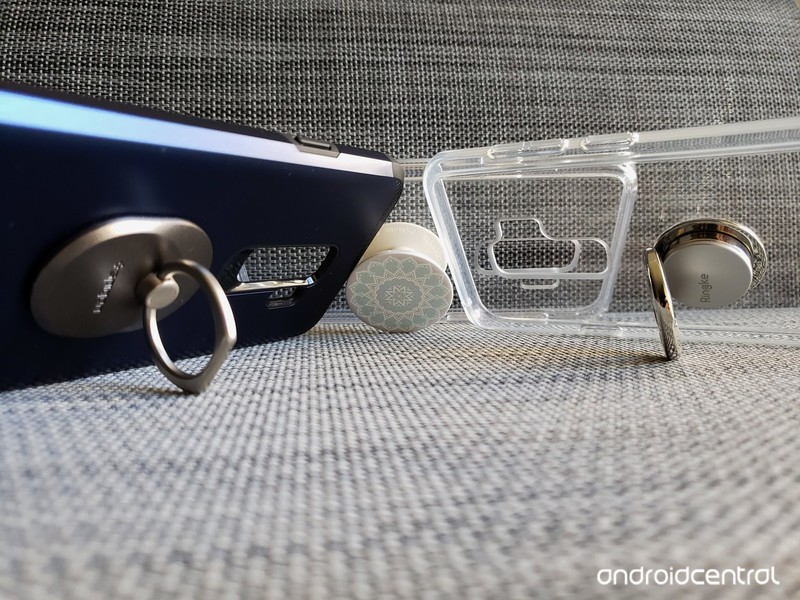 Running rings around the competition

These grips all double as kickstands, but unlike our other categories, there is a clear loser here. The adjustable hinges of the Spigen Style Ring and Ringke Ring allow you to set your kickstand at a variety of heights, both horizontally and vertically. The kickstand ability on a PopSocket, on the other hand, is painfully basic: if your PopSocket is fully extended, it should hold your phone up in landscape mode at a single angle to watch a movie. That’s it. 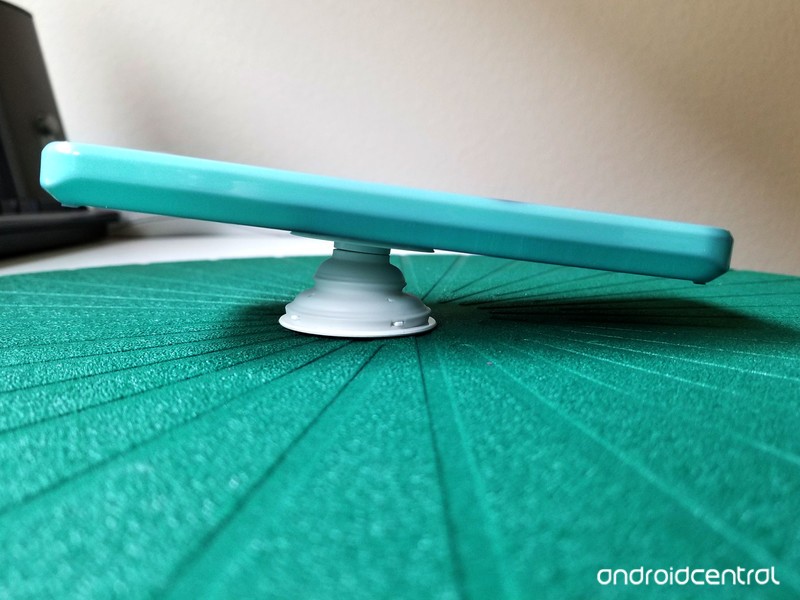 Whether you use one PopSocket or two — PopSockets began life as headphone cord organizers, wrapping the wire between two PopSockets and then pushing the accordion down to hold them in place — it won’t prop your phone up vertically, something ring-style grips do easily. It may not seem like much, but being able to prop your phone up in portrait mode makes it far easier to see, use, and reference your phone while it sits next to your laptop or keyboard. That said, being able to prop your phone up vertically is something not everyone needs to do with their phone grip, but every user wants their phone to be stable when its laying on a flat surface, and with a Spigen Style Ring, that just doesn’t happen. It’s the biggest strike against it, but at least you can prop the Spigen Ring up in a low-angle portrait mode to compensate for it. The Ringke Ring will lay flat depending on how balanced the phone sits on top of it, but once you need to start tapping it, expect a little wobble here and there when tapping near the edges of the screen, like the nav bar. Proprietary mounts aren’t worth the hassle.

If you want to use the designated mounts for these systems, be prepared to shell out. PopSockets sell its mounts separately, and said mounts cost as much as PopSockets themselves. The Spigen Style Ring includes a car/wall mount with purchase, but if you need more than one, you’ll have to buy another Style Ring, too; mounts aren’t sold separately. Ringke doesn’t sell Ringke Hooks separately, either, but at least it put two in the box.

That said, these proprietary mounts are a pain and expensive if you want to use them in multiple cars or rooms of your house, so skip them and reach for those magnetic car mounts that I mentioned earlier. If you place your grip high enough on your phone, you’ll have enough room at the bottom of the phone for the magnetic plate or sticker to get a grip. 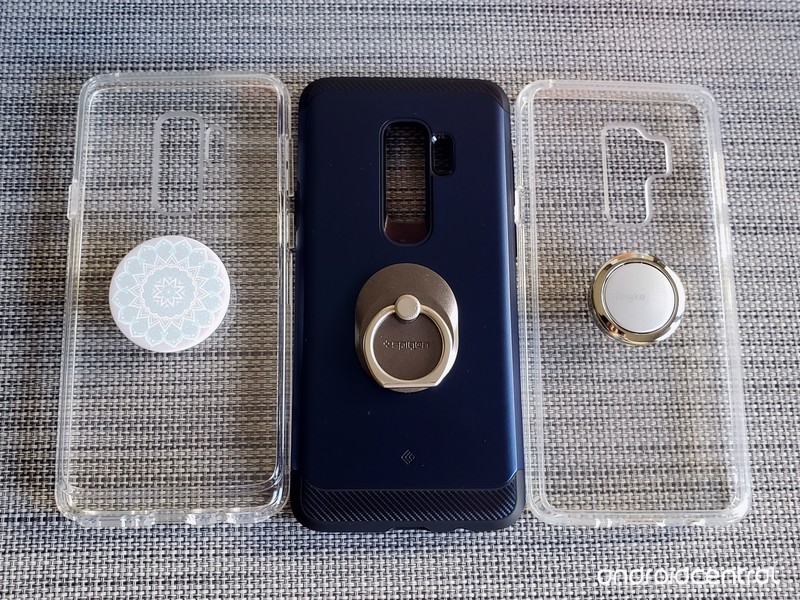 Which should you buy?

These grips are fairly close on pricing. The Ringke Ring (with 2 mounting Ringke Hooks) and more basic styles of PopSockets are $10 a pop, while the Spigen Style Ring (and one car mount) is $14 and the most of the Premium or Licensed PopSockets are $15. Which mount you buy then depends on your style… 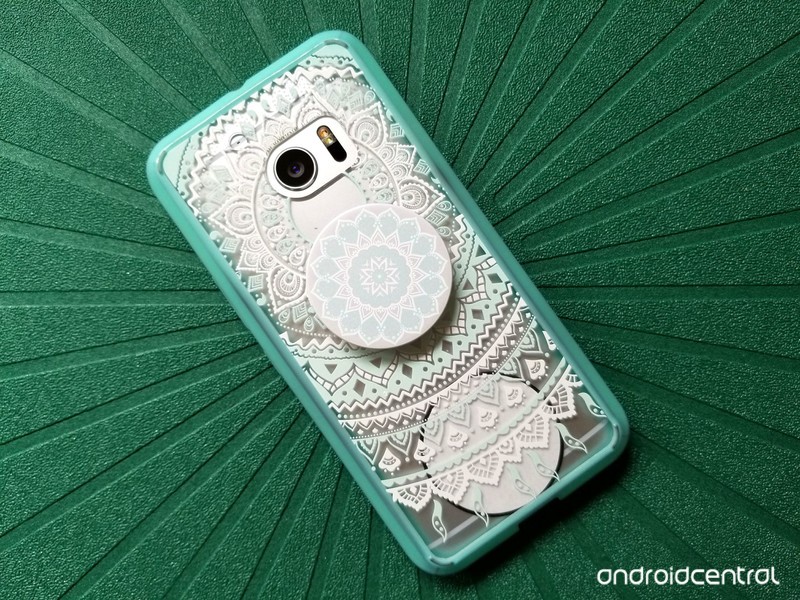 A PopSocket is a more stylish-looking accessory, adding a pop of flair to your device, but it’s not just not as versatile as ring grips. What it lacks in productivity, though, it makes up in longevity: Popsockets take a long time to wear out, while the bearings that let ring grips hold their angles have a tendency to wear out after a year or less, depending on how hard you are on it. 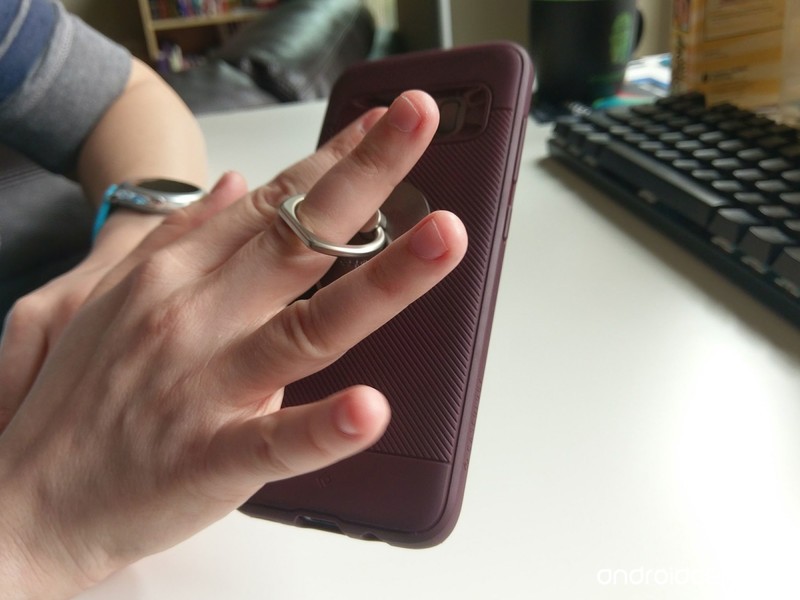 Ring grips are more adaptable and more productive. I use their adjustable kickstands to prop up my phones in portrait mode next to my Chromebook all the time, and I’ve used the steadfast grip of a ring grip to use my phone one-handed while hula-hooping. The Spigen Style Ring is the original and is still just as sturdy as ever, still going strong after three or four different flat-style rings have worn out their bearings, and its pointed ring makes it a more stable, sturdy kickstand. 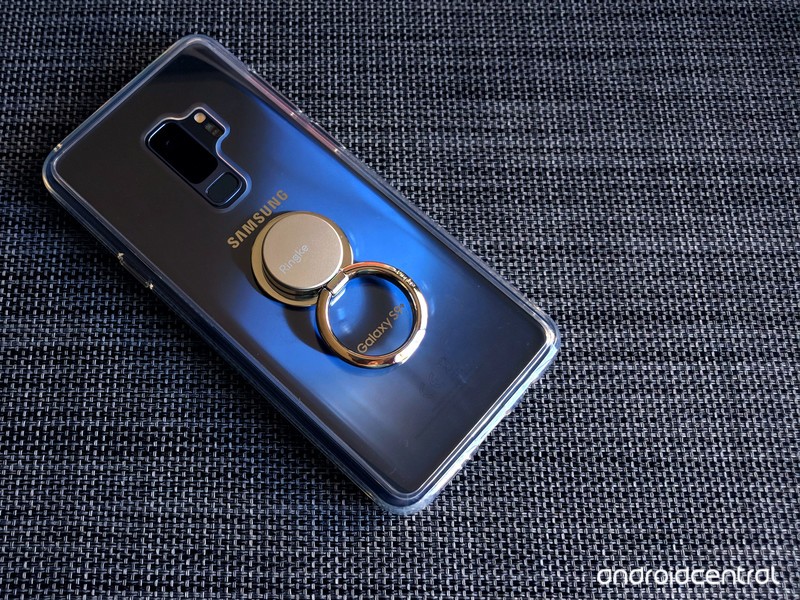 But part of why my Spigen Style Ring has held out as long as it has is that I don’t really like using it on tables since its uneven nature makes it rattle around. The Ringke Ring is more stable laying on its flat back and $4 cheaper. Being able to lay the ring down without losing the angle that matches my finger perfectly also makes it easier to slip the Ringke Ring on and off repeatedly without wearing out its bearings too quickly, and it has a cleaner look overall.

So the grip I’ll be trusting as I head out into the world trying to text one-handed with my massive Samsung Galaxy S9+ is without a doubt the Ringke Ring.

Updated June 2018: We’ve expanded this guide to include the Ringke Ring as a flat-style ring grip and our new winner.

Read more from News
← From the Editor’s Desk: One-handed usability in the 19:9 world
Researcher claims to bypass iPhone security limits, but may have spoken too soon →