9 military robots that are totally terrifying … and oddly adorable

The military has always been at the cutting edge of technology, so it should come as no surprise that the most advanced robots in the world are being built with military applications in mind. While the thought of autonomous machines carrying heavy armaments might make people a bit nervous, they have the potential to dramatically reduce loss of life, allowing soldiers to safely scout locations or breach enemy locations. Many of them are even designed for support purposes, rather than eliminating threats.

While many military projects from around the world are naturally shrouded in secrecy, some of them see the light of day, including robotic projects. Here are some of the coolest robots we’ve seen with military applications, from tiny spy robots to unmanned battle tanks. 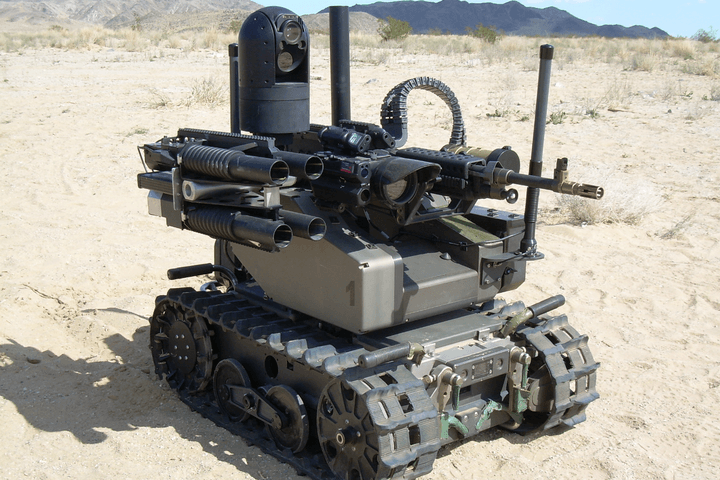 Don’t let its small size fool you. The MAARS (Modular Advanced Armed Robotic System) fits a lot of firepower into its diminutive frame. Its modular design allows its controllers to outfit it with a variety of armaments, ranging from non lethal lasers (designed to blind foes) to tear gas and even a grenade launcher. The MAARS is a follow-up to an earlier model of robot called SWORDS, which saw deployment in Iraq a few years ago.

“What a cute robot!” you might say, as you see the DOGO round a corner. The small machine, roaming around on two treads, could be mistaken for a toy — at least, until it whips out its Glock. Yes, the DOGO houses within its body not only a camera, allowing for remote reconnaissance, but also a 9-millimeter pistol. A promotional video from manufacturer General Robotics shows off the DOGO in a scenario like something out of a Tom Clancy story, as a special forces team sends the DOGO into a hostage situation, taking out one of the kidnappers remotely.

When designing a robot for military use, creating a heavily-armed assault machine is an obvious route to take. However, any military force has needs beyond shooting bad guys, and there are quite a few robots in development with an eye toward support functions. Take the SAFFiR (Shipboard Autonomous Firefighting Robot), for example. The creation of Virginia Tech engineering students, the SAFFiR is designed to extinguish fires that break out on Naval ships. Although the machine is still in development, it will hopefully be able to react quickly to fires and resist much higher temperatures than the human body, thus keeping sailors out of danger.

Not every military robot needs to come equipped with guns. Reconnaissance is a vital part of military operations, and the small, spherical Guardbot is built with that purpose in mind. Originally designed for missions to Mars, the Guardbot is equipped with powerful cameras and can navigate various adverse environments, including those prone to snow, sand, and even water. 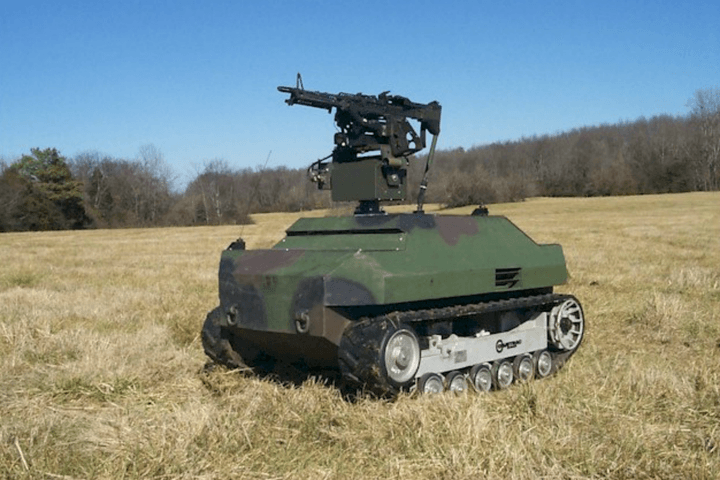 Designed to assist the U.S. Marine Corps in various operations, the Gladiator Tactical Unmanned Ground Vehicle looks like a small tank, and can be outfitted with various modular tools and armaments depending on what the situation calls for. Although it tops out at 10 miles per hour, the Gladiator trades speed for toughness; it has an armored hull, and users can mount machine guns and grenade launchers directly onto its body.

Allegedly built by two brothers, according to a story by the Baghdad Post, this robot is an unmanned vehicle designed to combat ISIS forces. Footage of the machine shows it sporting heavy weaponry and rolling around the Iraqi desert on four large wheels. Given the typical hazards soldiers face when combating ISIS — IEDs, ambushes, etc. — machines like the Alrobot may be crucial in minimizing risks to human soldiers. 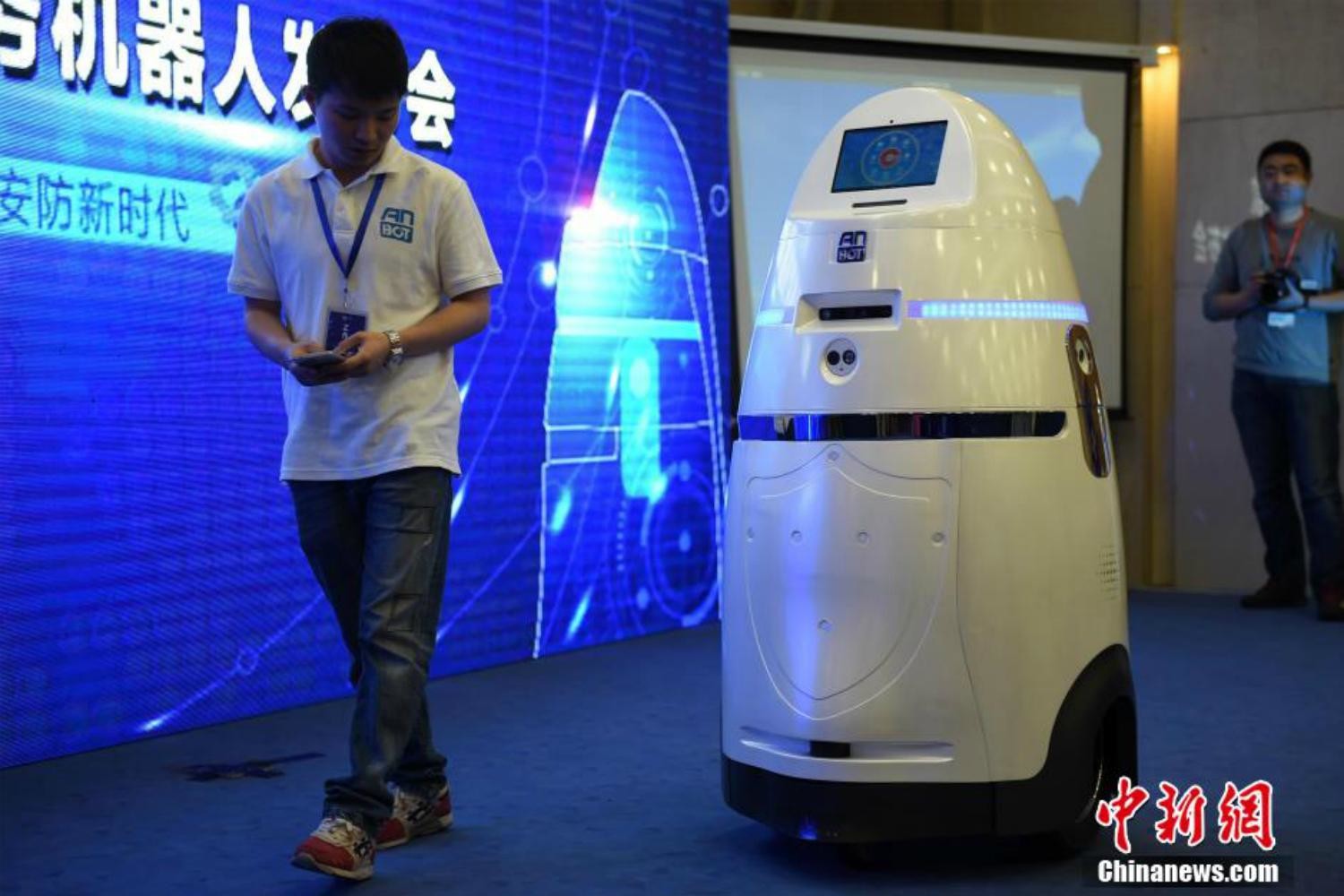 The Chinese-developed Anbot is an armed police robot designed by the country’s National Defense University. Capable of reaching max speeds of 11 mph, the machine is intended to patrol areas and, in the case of danger, can deploy an “electrically charged riot control tool.” Those worried about the Anbot’s resemblance to a Dalek, take heart; no blue police boxes have yet been seen in its vicinity.

Developed by Harvard’s Microbiotics Laboratory, this tiny robot is capable of hovering, although it seems to require an attached power cable for the time being. Theoretically, the RoboBee could represent an important step toward insectoid robots capable of transmitting audio or video, which would allow military intelligence to truly be a fly on the wall in important meetings. Of course, it could also help with non-military operations; its creators highlight the Robobee’s potential for crop pollination. 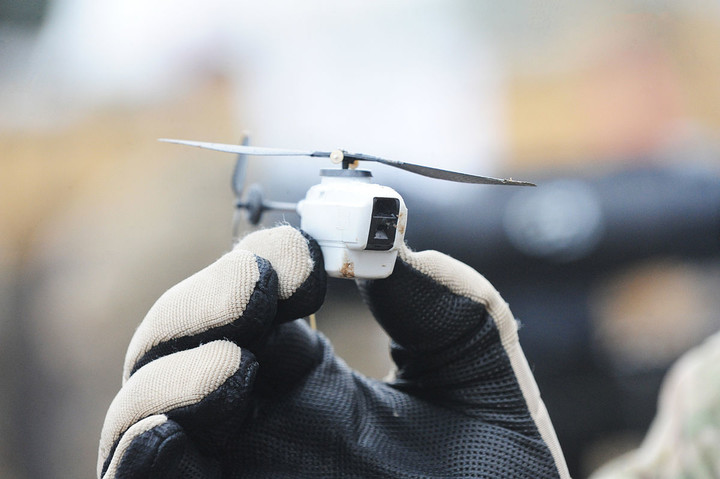 Another model of flying surveillance robot, the Black Hornet is made by Prox Dynamics, and looks like a miniature helicopter. The machine contains cameras that can stream live video to the user, allowing them to scout areas from a safe distance. Small, quiet, and helpful on the battlefield, the Black Hornet is like a Mission Impossible gadget in real life. The robot has already seen its share of action, too. Speaking with UAS Vision, British Major Adam Foden said that the military has already begun deploying the Black Hornet inside compounds in an effort to clear routes through enemy-held spaces. It’s worked well thus far, and frequently transmits clear and concise images back to British forces.