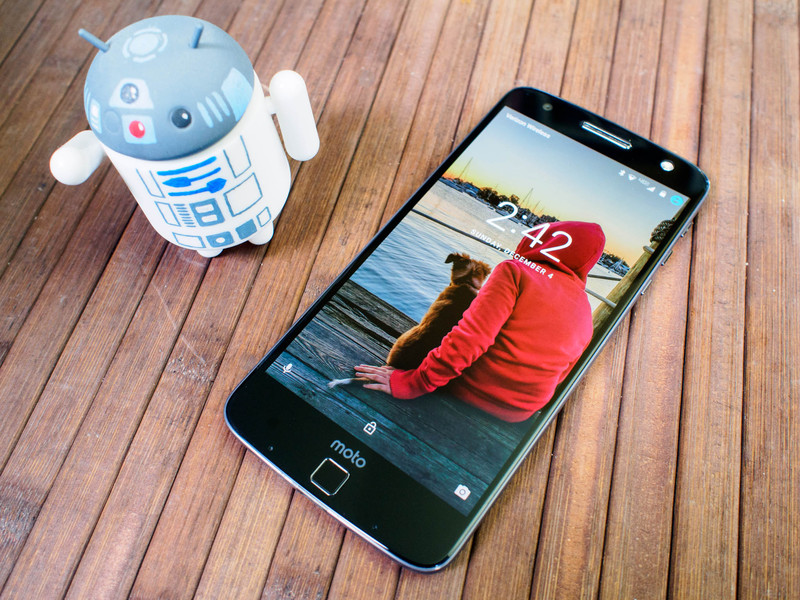 Want to give your Moto Z an ego boost? Tack on one of these magnetic modular backs.

The Moto Z, Moto Z Force, and Moto Z Play are all modular smartphones that can take advantage of Motorola’s proprietary Moto Mods. You can buy them separately online or through your carrier. Once you snap them on, the Moto Z knows how to utilize them from there. Here’s the complete list of Moto Mods to check out for your modular smartphone. 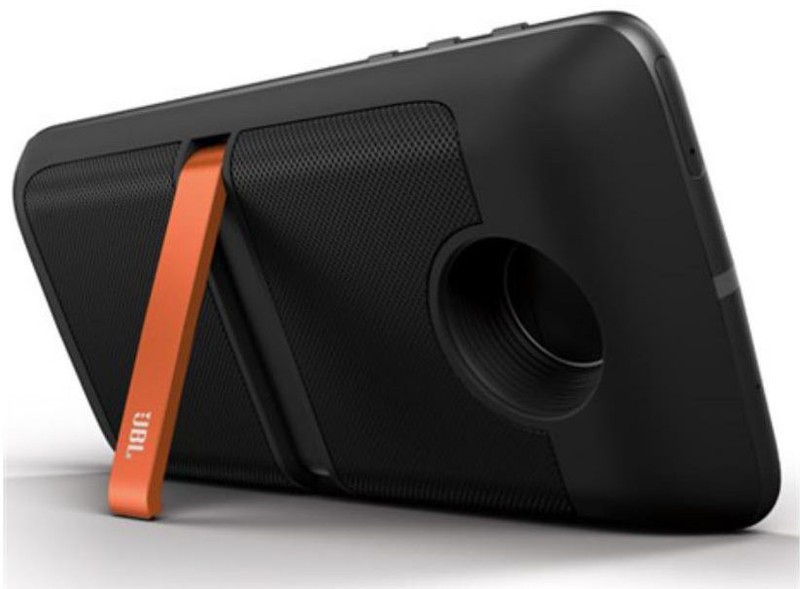 The music is better when you’re dancing to it with your friends. Bring your Spotify playlists to life with the JBL SoundBoost speaker, which snaps on to the Moto Z and has a built-in kickstand. The mod is comprised of two 27mm speakers with 6W of power each. You can use the speaker to broadcast conference calls and make sure everyone in the room can hear what’s being said back at headquarters. There’s also an extra 1000 mAh of battery packed in there.

YouTube is fun for everyone, but not when you have to huddle over a small screen to see what’s going on. Snap on Motorola’s Insta-Share projector, which projects what’s on your Moto Z’s screen onto the wall of your choice. You can project up to 70-inches and adjust the device as you like with the included stand. The projector also adds on an extra 1100 mAh of battery.

Get up the ten times the optical zoom with the Motorola-commission Hasselblad True Zoom Camera. This Moto Mod turns your regular old smartphone into a bonafide point-and-shoot of sorts. It features optical zoom, xenon flash, and physical buttons for zooming’ and shootin’. And if you use the Moto Z’s RAW shooting format, you can do all the editing and tweaking you need to do to make it look professional in a desktop app. 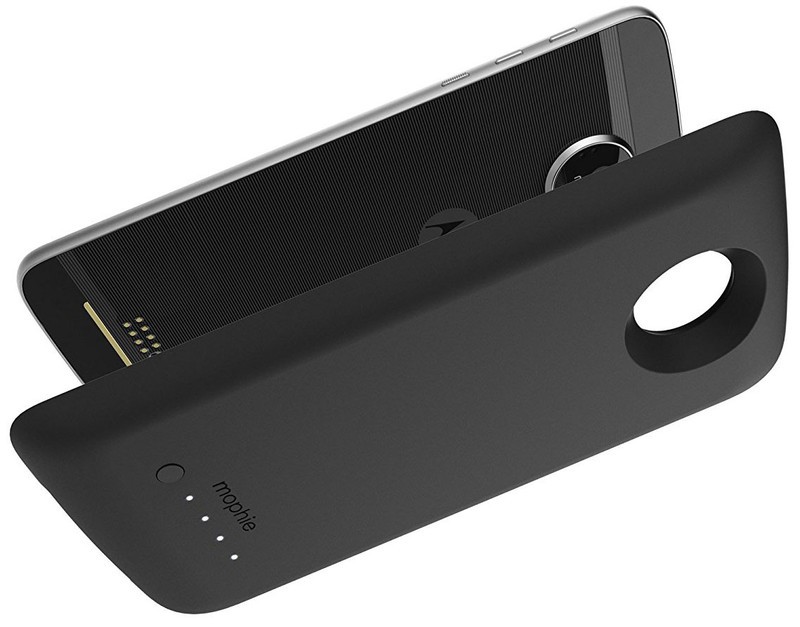 The battery will eventually peter out on your Motorola smartphone. Avoid living life without smartphone juice by packing something like the Mophie Juice Pack. This snap-on module provides an extra 3150 mAh of battery and can be easily recharged when you charge up the Moto Z. 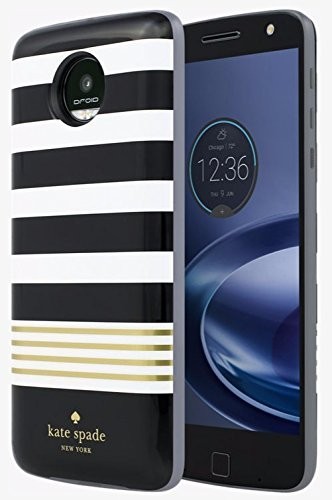 For the stylish lady in your life, get her a Kate Spade New York Power Pack. It not only hails the brand’s simplistic, modernist color palette, it also boosts her smartphone’s battery capacity an extra 2200 mAh. Like the Mophie Juice Power Pack, this easily charges alongside the Moto Z when it’s plugged in for the night.

There is also a polka-dotted variant that we found offered at Verizon.

One more power pack! This one is from Incipio and, like the Mophie Juice Pack, it’s a simplistic battery back you can tack on to the Moto Z for an extra boost of battery power. The Incipio Offgrid Power Pack features an additional 2200 mAh of battery. It also supports both Qi and PMA wireless charging, which will come in handy from time to time where wireless chargers might be available —this one compatible with the charging pads offered at Starbucks! It comes in both white and black. 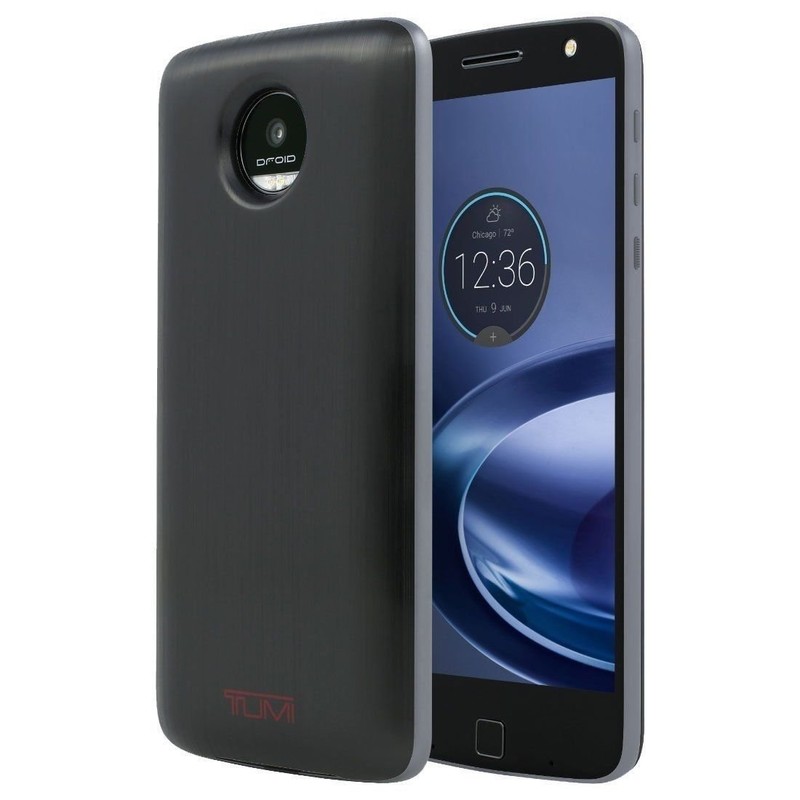 We were clearly joking. Here’s one more power pack and it’s from trusted luggage brand, TUMI. The TUMI Wireless Charging Power Pack is outfitted in a cool, collected black and adds an extra 2220mAh of battery to either of the Moto Z devices. It also supports Qi wireless charging, so you can set it down to charge both the phone and the power pack at the same time. The TUMI Wireless Charging Power Pack will also charge with the Moto Z when it’s plugged in for the night. 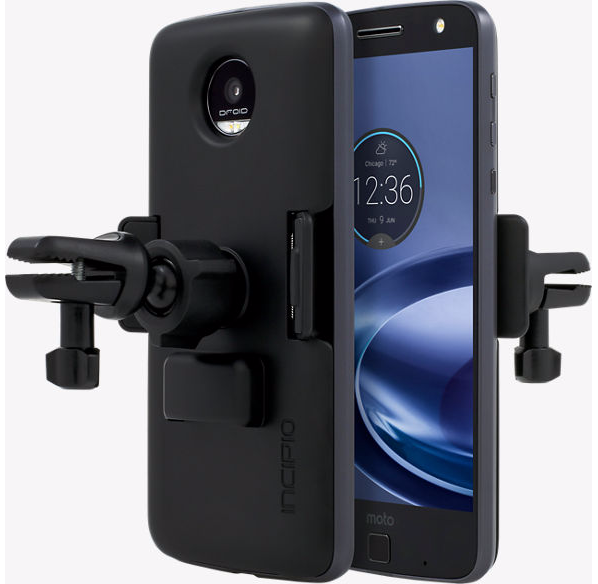 This phone mount doesn’t just cradle the Moto Z, it latches on to it. Once you snap in the smartphone, the dock will fire up Android Auto so that you can have immediate access to your contact, music, and maps without being distracted from the road. The Incipio Vehicle dock also offers 15-watt fast charging in your car.

The above Mods aren’t the only ones you can look forward to attaching to the Moto Z series. At Mobile World Congress 2017, Motorola announced a bevy of new Moto Mods, including a gamepad, a glass back wireless charging add-on, a Turbo Charger, and a charging adapter for other Moto Mods. There’s also an Alexa-powered Harman speaker dock coming at a later date.