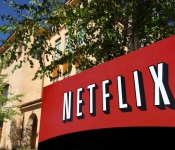 It looks like that (pending 2 years for existing customers) price hike hasn’t greatly affected Netflix’s popularity, as it announced today that it has 50 million customers altogether. About 36 million of them are in the US, and Netflix is about to launch in more European countries in September. The only real change we’re seeing mentioned in today’s earning report is that it’s about to start distributing in-store gift cards this fall, so you can give the gift of Netflix or join without having to pay online with a credit card. The company’s focus of course is how it’s building up a library of exclusive content, and it says Orange is the New Black became the most watched series in every Netflix territory when season two launched. Upcoming shows include Sense8 from the Wachowskis and the Daredevil series it’s making with Marvel, and it’s cast a number of big names for those shows already like Vincent d’Onofrio, Naveen Andrews and Rosario Dawson — check the gallery below for more details.

Read more from News
← Pirate hacks Modern Combat 5 and releases it to the world, Gameloft is not Pleased
Browse ‘The New Yorker’ archives free of charge for the rest of the summer →