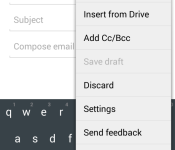 The hits just keep coming today don’t they. It is update Wednesday after all. We just handed you guys the keys to the Chromecast app for screen mirroring, now we have the update for Gmail. This update moves it to v4.9 and doesn’t do a whole heck of a lot. However, it is newer than the old one and that makes it worth installing.

The only visually noticeable thing, as pointed out by Android Police, is a new menu item in the overflow menu when writing an email that lets you add a file from Drive. Not huge, but something. We have also seen comments floating around that the update solved some sync issues some users were having. Not sure how true that is or not. If you don’t see the update in the Play Store just yet you can just hit the link below and go grab the apk.

Read more from News
Software
← That painful Brazil vs. Germany World Cup match was the most tweeted-about sports game ever
DEALS & STEALS: Amazon offering up to $50 off Kindle Fire tablets →