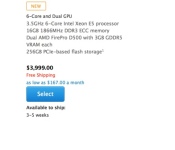 Apple’s Mac Pro is now shipping within three to five weeks in the United States, a slight improvement from its previous shipping estimate of four to five weeks.

Both stock and custom configurations list the same shipping estimates, indicating that Apple is slowly making its way towards achieving supply/demand balance on the professional desktop computers.

“Demand for the all new Mac Pro is great,” said an Apple spokesperson in December. “It will take time before supply catches up with demand.”