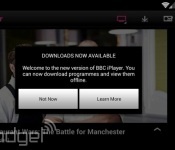 The BBC has allowed Android users to download programmes since September last year, but that functionality was only extended to 11 of the most popular Android devices at the time. While its slowly expanded support over the past seven months, the Beeb today welcomed the majority of Android iPlayer users to the party, updating the app to allow downloads on devices running Ice Cream Sandwich and above. To put it in perspective: 96 percent of current BBC iPlayer users now have a smartphone or tablet capable of storing programmes for offline playback.

The update comes as part of the BBC’s Mobile Compatibility Programme, which aims to extend the same features to all Android users regardless of their device. While you should be able to enjoy downloaded content error free, the BBC warns users that the odd issue may surface, but that’s only because it can’t test all of the “five thousand different phone, phablet and tablet models able to install the iPlayer Android app.”