Windows Phone 8.1 does Miracast media sharing, but most devices won’t cut it 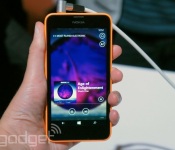 Windows Phone 8.1 includes many, many upgrades, not the least of which is Miracast media sharing; it should be easier than ever to send content to your TV and other gadgets. However, it’s now very likely that you’ll have to upgrade to a newer phone to get that convenience — Microsoft’s Joe Belfiore says that most existing Windows Phone 8 devices can’t handle Miracast. A recent flagship like the Lumia 1520 might cut the mustard, but the executive isn’t certain that it will work. The limitations are no doubt unfortunate if you were hoping to unlock Miracast through a software update, but they’ll at least give you a good excuse to upgrade an older handset.