The Red Dead Redemption 2 PS4 bundle is back in stock at Amazon!

Rhyming? Alliteration? This game’s got it all.

Update: This pre-order is back in stock! 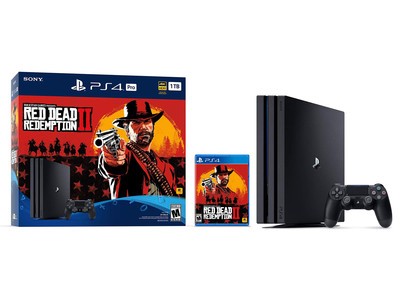 The Red Dead Redemption 2 PlayStation 4 Bundle is available for pre-order at both Amazon and Best Buy. It is set to ship at the end of October and it’ll run you $399.99, which essentially means you’re getting the game for free.

The bundle includes a jet black PS4 Pro 1TB console, a Dualshock 4 wireless controller, and a copy of Red Dead Redemption 2. The game is set in America in 1899. An excerpt from Amazon’s description reads: After a robbery goes badly wrong in the western town of Blackwater, Arthur Morgan and the Van der Linde gang are forced to flee. With federal agents and the best bounty hunters in the nation massing on their heels, the gang must rob, steal and fight their way across the rugged heartland of America in order to survive. As deepening internal divisions threaten to tear the gang apart, Arthur must make a choice between his own ideals and loyalty to the gang who raised him.

Of course, if you already have a console and don’t plan on upgrading, it’d be a better use of your time and money to just pre-order the game. However, if you had plans to purchase or upgrade your console anyway, this bundle saves you $60 compared to buying the two separately.