The Nokia True wireless earbuds have a miniscule form factor

These + your phone = a match made in heaven. 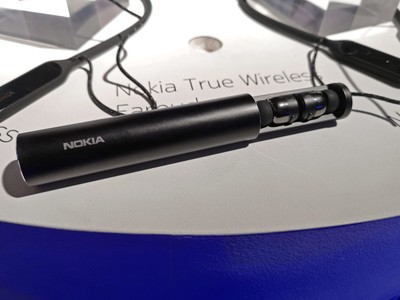 Hot on the heels of the Nokia 7.1 smartphone, a new product is here that will pair perfectly with your smartphone.

Meet the Nokia True Wireless Earbuds. These sleek, minimalist headphones are super lightweight, coming in at just 5 grams per earbud. They come rocking Bluetooth 5.0 and feature IPX4 resistance, meaning splashes and sweat won’t pause performance. You’ll get up to 3.5 hours of stereo music playback and phone calls per charge, though that increases slightly if you’re only using them to chat on the phone. The included USB-C case acts as a portable charger which can bring your headphones back to life a full three times before needing to be recharged itself. It also features a spring-release button system to pop your headphones out. They’ll retail for about $150 when they’re released, whenever that may be. We don’t yet have a definite release date.

This is an interesting move, considering the Nokia 7.1 will have a headphone jack. However, these are a nice lightweight alternative to something like the Anker Soundcore Liberty wireless headphones, and you’ll be future-proofed should a future device be jack-less.

If you don’t want to lose any earbuds or your budget is slightly smaller, you may be more interested in the $79 Pro Wireless Earphones. These are connected by an around-the-neck wire and charge over Micro USB. The battery life is improved over the True Earbuds, and the neckband has built-in controls as well. The neatest features are all about tactile feedback. The magnetic earbuds can click together to end calls or pause music, and they vibrate when you have an incoming call. While you’ll be a bit behind with Bluetooth 4.2, you can also use these with various voice assistants which is always nice. The release date on these is yet to be determined as well, though we anticipate both pairs being available by the end of the year.