How to watch (and appreciate) the Indy 500, the ‘greatest spectacle in racing’

It has been called the “Greatest Spectacle in Racing.” It’s one of the few races people not familiar with motor sport have heard of. It’s 500 miles of wheel-to-wheel driving on an oval track known as “The Brickyard.” It’s the Indy 500. But what is this legendary race really all about? Buckle up, because we’ve got everything you need to know right here.

This year marks the 101st running of the Indy 500, but the first 500-mile race was held in 1911, not 1916. Races were cancelled a handful of times because of World Wars I and II. The track itself opened in 1909 and was paved with 3.2 million bricks, which is why it’s still called “The Brickyard” to this day. The bricks have long since given way to pavement, except on the start/finish line.

Indianapolis Motor Speedway was originally envisioned as a test track as well as a racing venue.

Indianapolis Motor Speedway was originally envisioned as a test track as well as a racing venue. In the early days of the auto industry, Indianapolis actually rivaled Detroit and had several native car companies. Forty cars entered the first Indy 500, and today the grid is limited to 33 cars. Typically, there are more drivers than available slots, but for the past two years, exactly 33 cars have shown up.

Indy is a 2.5-mile oval with banked turns, so it takes 200 laps to cover 500 miles. The banking and long straightaways let drivers hit higher speeds than more technical road courses. Modern cars at Indy can top 200 mph, so engineers must carefully balance the reduction of aerodynamic drag with downforce — the use of airflow to help stick cars to the track — which can lower top speed.

The track is actually located in (appropriately named) Speedway, Indiana, a few miles from Indianapolis proper. Besides the oval, Indy is known for the huge trackside pagoda and scoring tower on the front straightaway, and “Gasoline Alley,” the row of garages where teams work on their cars. The track was treated to a $90 million renovation in 2016, including a new upper grandstand, fencing, and front entrance. 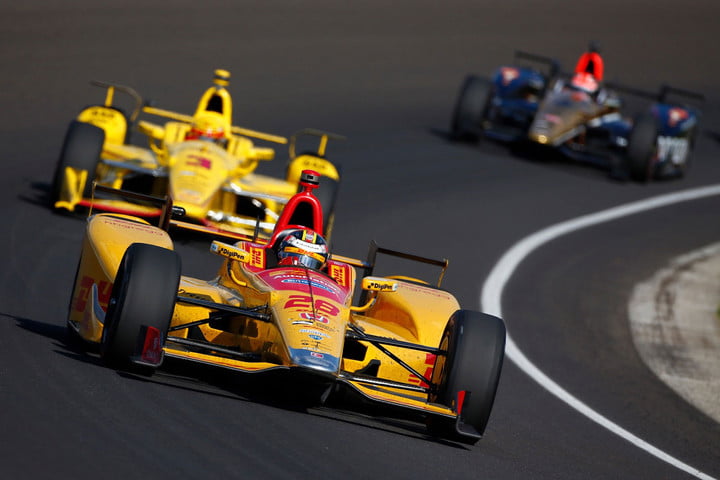 The format is similar to other races, with practice sessions, qualifying sessions that determine the starting order, and the race itself. While most races contain all of that in one weekend, the Indy 500 spreads it out over about two weeks, with the main event on Sunday, May 28. Last year’s winner, Alexander Rossi, completed the race in 3 hours, 2 minutes, and .08 seconds. Compare that to Ray Harroun, who won the first Indy 500 in 1911. It took him 6 hours, 42 minutes, and 8 seconds to run the requisite 500 miles.

While the winners of most other major races celebrate with champagne, the Indy 500 winner traditionally downs milk, and is presented with the Borg-Warner trophy. The sterling silver trophy includes the likeness of every winner since the first race in 1911.

The cars: A history of innovation

The evolution of Indy 500 race cars demonstrates how competition can both encourage and stifle innovation. Indy has often been a testing ground for radical ideas. Yet teams still want to win, and sticking with proven designs is almost always a better bet than trying something new and untested.

In the early years of the 500, everything was untested. The race was as much a trial for the then-new contraption known as the automobile as it was a competitive event, and early cars shared many components with production models. The first Indy 500 was won by Ray Harroun in a Marmon Wasp that incorporated two notable innovations: a single-seat design that set the template for most modern race cars, and a rearview mirror.

The evolution of Indy 500 racecars demonstrates how competition can both encourage and stifle innovation.

A diverse group of manufacturers participated in those early races, from Buick to Mercedes-Benz, but they were soon outclassed by one. Miller may be an esoteric name today, but this American firm dominated the Indy 500 in the 1920s and 1930s. Miller cars or cars using Miller engines won every race from 1928 to 1938. Much of Miller’s success came from engines with dual-overhead camshafts, a power-boosting design that wouldn’t be used on mainstream production cars for decades, but is now commonplace.

In the immediate postwar years, a different type of car came to dominate Indy. Known generically as “Roadsters,” these cars had the engine in the front, but offset to one side for better weight distribution, with the driver sitting more or less over the rear wheels. They were built by different race teams, but nearly every Roadster ran an Offenhauser four-cylinder engine. Dubbed the “Offy,” it was actually derived from a Miller design, and was so good it lasted in competition until the 1970s.

Once again, a single car design became the de facto Indy racer, but by the mid-1960s the winds of change were blowing again. At that time, British teams began building mid-engined race cars. Putting the engine in the middle makes for better weight distribution and more compact packaging. That’s why all modern IndyCars — not to mention Formula One cars and supercars from the likes of Ferrari and Lamborghini — have engines sitting behind their drivers. 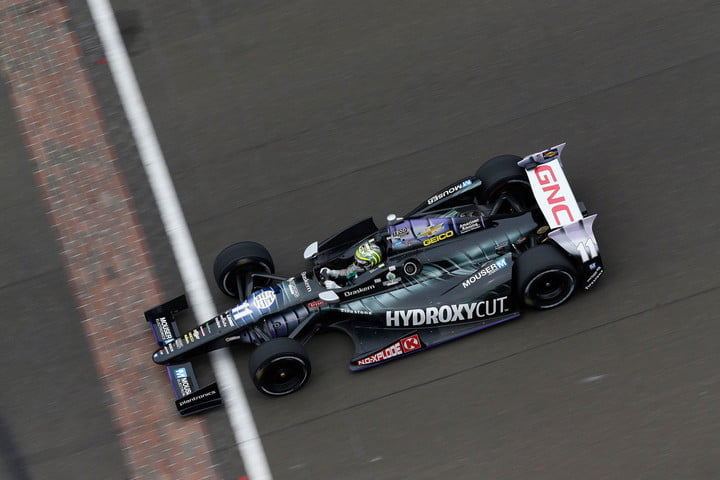 By the end of the ‘60s, nearly the entire Indy field had shifted to mid-engined cars with either Offy or Ford Cosworth DFV engines. That’s not to say teams didn’t try other things along the way. In 1952, Cummins entered a car powered by a massive 6.6-liter diesel engine. In 1967, Parnelli Jones nearly won the race in the STP-Paxton Turbocar, which was powered by the turbine engine from a helicopter (it conked out with just three laps to go).

The last major technological milestone for Indy racers came in the realm of aerodynamics. Cars began sprouting spoilers in the 1970s, and by the 1980s they were also taking advantage of “ground effects,” or the channeling of airflow underneath the car to help suck it down onto the track. The first car to put all of those pieces together was the 1980 Chaparral 2K, nicknamed “Yellow Submarine” because of its Pennzoil livery. Soon, every car on the grid looked like it.

And so we arrive at the IndyCar machines of today: Lightweight single seaters with mid-mounted engines and lots of aerodynamic aids. That formula likely won’t change anytime soon, as current rules lock teams into using a single car design. That’s supposed to level the playing field, but it also makes things a little less interesting.

Not that today’s IndyCar racers are unimpressive. All teams use the same chassis from Italian race-car manufacturer Dallara, with engines from Chevrolet or Honda. Both are twin-turbocharged, direct-injection V6s that produce 550 to 700 horsepower, depending on the track. During the Indy 500, the cars are capable of reaching speeds of up to 235 mph.

In a bid to differentiate Honda and Chevy-powered cars, organizers also introduced “aero kits” in 2015. While they succeeded in making the cars look different, the kits caused other problems. Honda’s version has made cars much slower than their Chevy counterparts. A low-drag version of the Chevy kit made cars a bit too fast, to the point where some left the ground in some heart-stopping crashes in 2015.

IndyCar is now reevaluating the aero kit rules, and plans to make changes for the 2018 season. Updates are expected to yield a sleeker design that will be applied to all cars, whether they have Chevy or Honda engines.

Read more from News
← Fake it till you make it! How to shoot and edit amateur vlogs that look pro
The best bike lock →