To find the best bicycle lock, we ordered 27 of the toughest we could find, and then we sawed, chopped, and cut them all to pieces. We learned that almost every lock can be defeated in under a minute, but the Kryptonite Evolution Mini-7 is the most affordable lock that will most likely need a power tool (accompanied by a lot of noise) to be beaten. It offers enough of a security advantage over other locks in this price range to keep a modest commuter bike from becoming an easy target for thieves. It has a secure but usable 7-inch length, includes a 4-foot cable to leash the front wheel and accessories, and also comes with a free year of anti-theft protection, upgradable to five years for only $25. 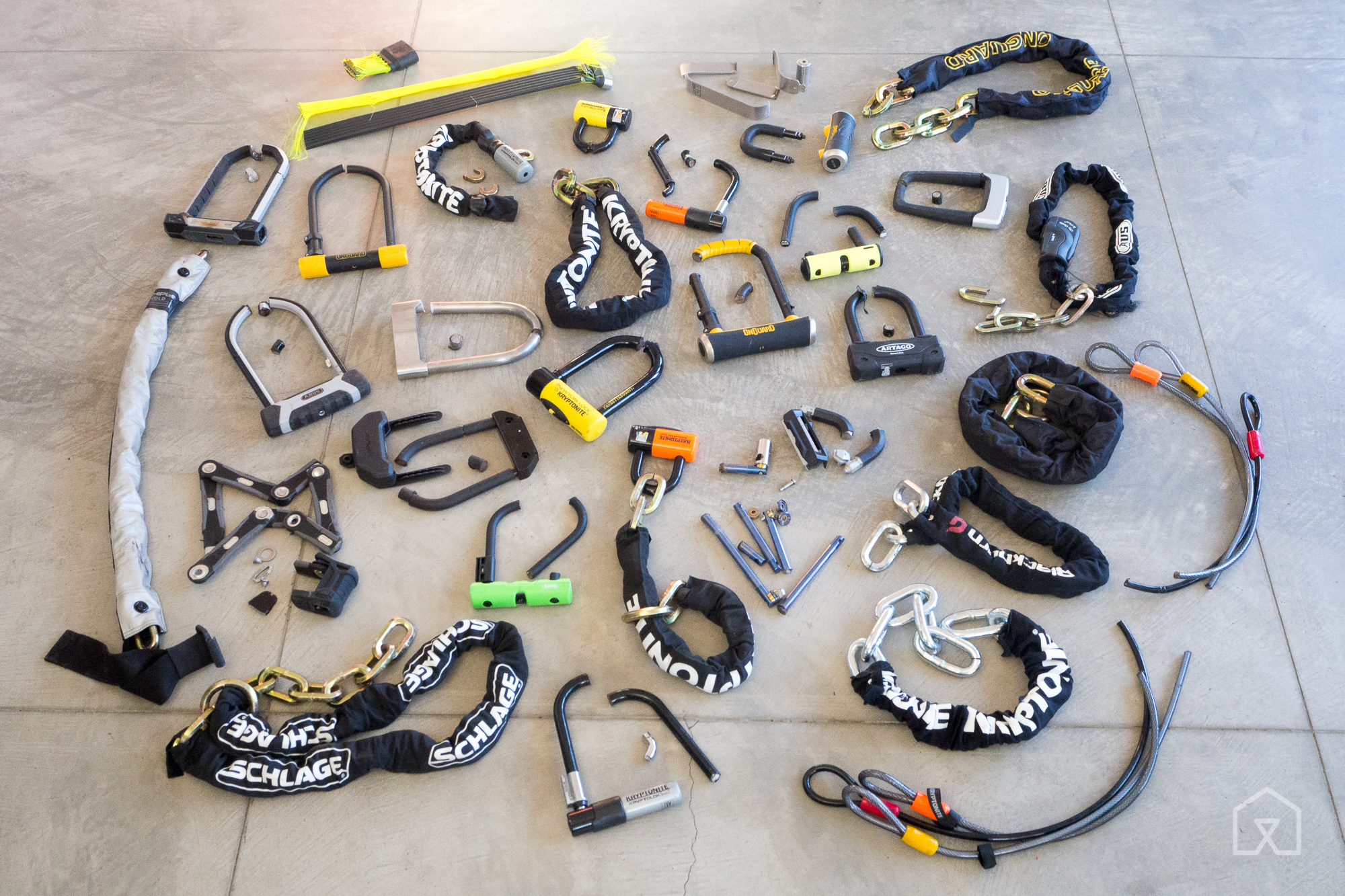 Our testing pool after a few rounds of security testing. Photo: Duncan Niederlitz

We spent many hours researching all the locks available from the major brands in the bicycle industry, attending the Interbike trade show to see not-yet-available options, reviewing our previous guide, looking into the most popular locks on Kickstarter, and searching for well-reviewed locks from smaller companies or lesser-known brands.

Manufacturers make dozens of locks in very similar styles. With supposedly different levels of security and proprietary ratings systems, however, it can be hard to decide which locks are comparable with each other, other than blindly going by price or researching the ratings from independent organizations that rate bicycle locks. Unfortunately, these institutions use different rating scales, and not all lock manufacturers submit all of their locks to be tested.

We decided that our only way forward was to order the most expensive locks from every company we could and destructively test them all ourselves in order to set our own baseline for what each company considered its highest level of security. We then ordered the budget locks from our previous guide, as well as some of the upgrades from companies that finished well in our first round of tests, and destructively tested all of those, too. We eventually had a total of 27 locks from ABUS, Altor, Artago, Blackburn, Hiplok, Knog, Kryptonite, Litelok, OnGuard, RockyMounts, Schlage, and TiGr.

We tested each of the 27 finalists using the most common tools available to a bike thief, including lock picks, cable cutters, hacksaws, bolt cutters, and an angle grinder. For more on our testing, and to watch a bike thief at work, see our full guide. 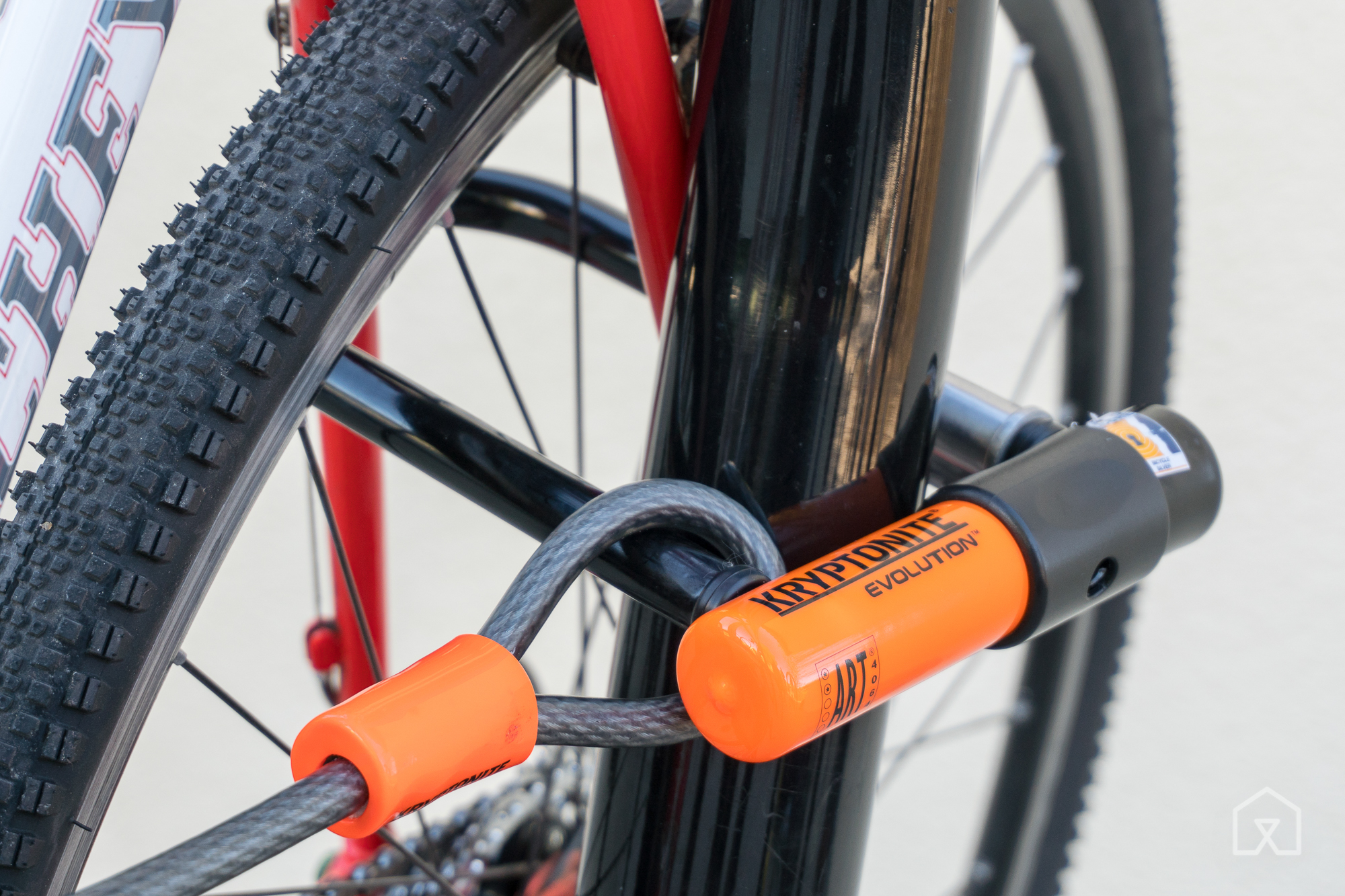 The Kryptonite Evolution Mini-7 U-lock comes with a cable and a free year of the company’s anti-theft protection. This model is slightly more expensive than our previous pick, the Kryptonite Series 2, but it has one advantage that’s hard to see: Instead of using just a case-hardened shackle (the big U-shaped loop that U-locks get their name from), the Evolution series uses a harder steel shackle and a hardening process that, though not technically being “through hardened,” still withstood more abuse in our tests than other locks at the same price. Although we could cut lesser locks with only 24-inch bolt cutters, the Evolution Mini-7 withstood even our 36-inch cutters, surviving with just a couple of small scratches.

Proper locking technique: The U-lock goes through your bike’s back wheel and seat stays (the pair of diagonal skinny tubes that connect under your seat). The cable adds protection for your front wheel. Video: Kyle Fitzgerald

The Evolution Mini-7 also uses the more secure disc-detainer locking mechanism. This style of keyway and mechanism is very resistant to picking, requiring specialty tools, patience, and skill to pick. After consulting with multiple lock-picking enthusiasts and experts, we’ve decided that the chances of having this lock picked on the street are very slim compared with the those of some of the other locks we tested.

The only real flaw with this lock is that it locks on just one side of the shackle, using a bent foot on the nonlocking side. When we were confirming some technical specs with Kryptonite PR manager Daryl Slater, he informed me that the new versions of the Evolution Mini-7 and Mini-5, to be released early summer 2017, would have a dual-locking shackle. If that turns out to be the case, and if the price remains similar, it would remove the only flaw we currently see in this lock.

The disadvantage of this feature is that a thief needs to make only one cut, instead of two, in order to be able to remove the lock; the design effectively halves the time it takes to cut the lock. However, the design does offer an advantage, as the bent foot can act as a pivot to help squeeze the lock together when it’s a tight fit. 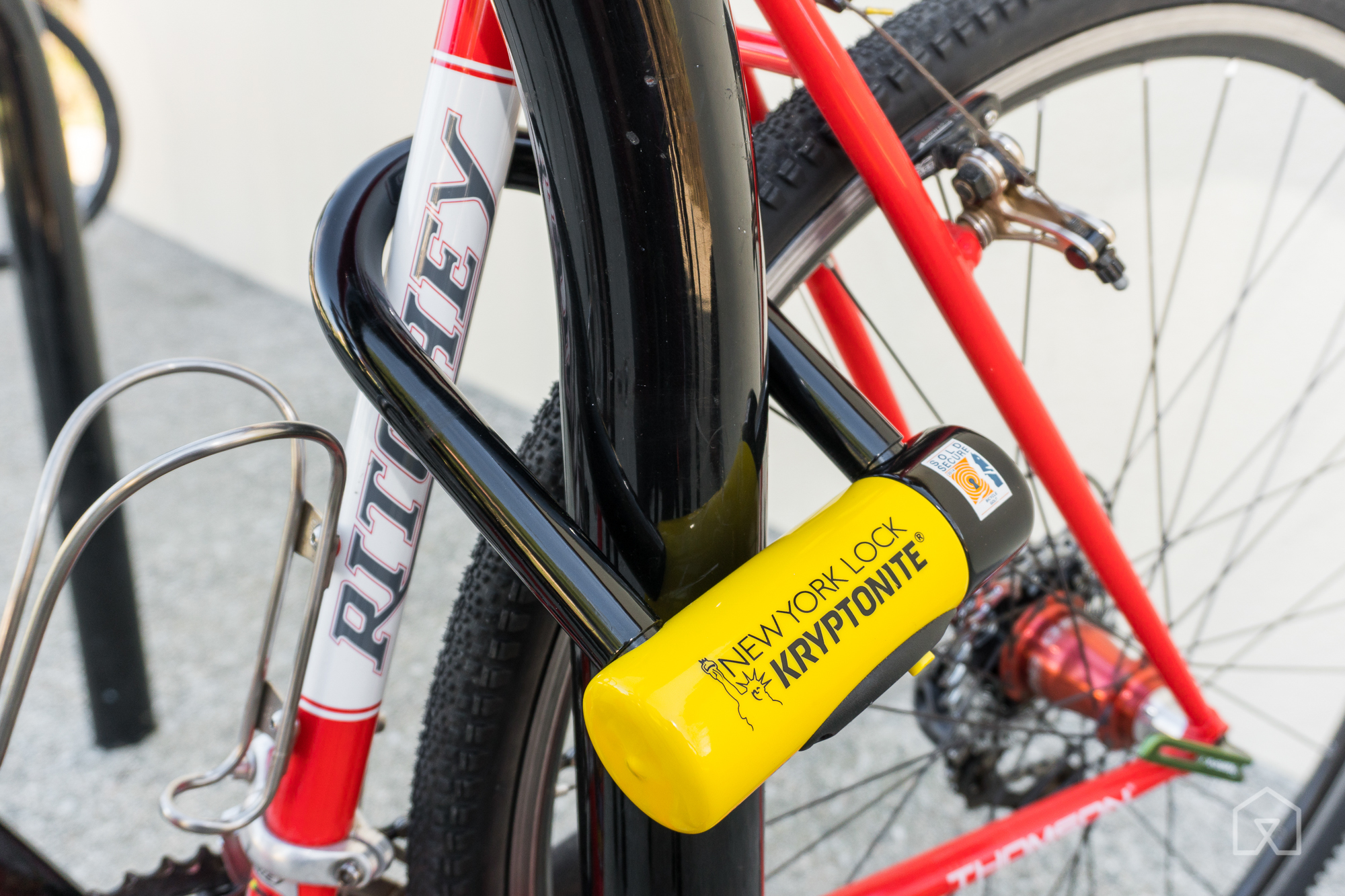 The Kryptonite New York Fahgettaboudit Mini U-lock is a workhorse. You won’t find any special features or extra frills with it, just a lot of it—4.55 pounds’ worth. It uses a through-hardened dual-locking shackle and extra metal in the crossbar for even more security. The 18 mm shackle has a cross-sectional area twice that of our top pick’s 13 mm shackle, and correspondingly takes twice as long to cut through. And whereas the Evolution Mini-7 needs to be cut only once, the dual-deadbolt design of the New York Fahgettaboudit Mini requires two cuts for a thief to remove it from a bike or rack, resulting in a total time to remove that’s four times that of the Evolution Mini-7.

The only significant downside to this lock, other than an increase in price over our top pick, is that it’s double the weight of our pick, but as our tests showed, a more hardened metal is the key to more security. The New York Fahgettaboudit Mini also does not include any mounting hardware if you wanted to attach it to your frame, and you would need to buy a cable separately. 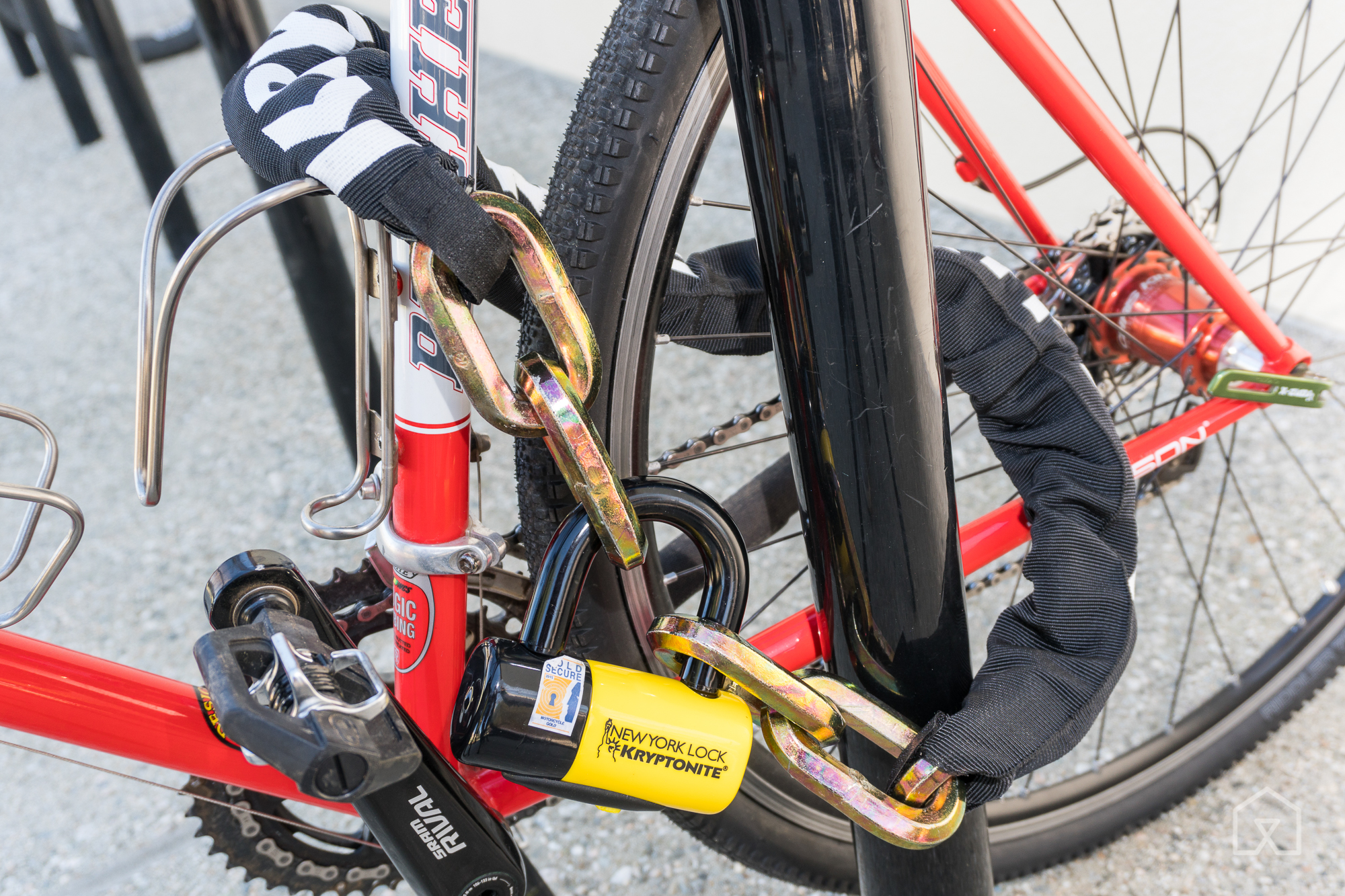 Whether you have a cargo bike or an electric assisted bicycle with a nontraditional frame, or the best place for you to lock up your bike is to a telephone pole, a chain lock can sometimes be a necessity. We think the Kryptonite New York Fahgettaboudit Chain is the best chain for the money for high-security situations.

The chain uses 14 mm through-hardened links and comes in a fairly standard 39-inch length as well as in a giant, 5-foot version. The chain is connected by Kryptonite’s 15 mm New York disc lock, with a dual-locking shackle and a disc-detainer mechanism.

The only chain locks that took us longer to cut though were the Kryptonite New York Legend and the Artago 69T100E, both of which cost significantly more. If you’re particularly concerned about security, we think spending that kind of money on a stronger secondary lock would be a more savvy purchase and would give you more security for the same amount.

Read more from News
← How to watch (and appreciate) the Indy 500, the ‘greatest spectacle in racing’
After Math: That took long enough →