There is no shortage of apps out there that can handle basic video editing and sharing, but Clips’ Live Titles feature and iMessage integration make it a unique option for Apple’s customers.

We’re living in the golden age of short-form video. Between Instagram, Snapchat and, up until recently, Vine, it’s never been easier to create and share customized video. For iPhone and iPad owners, however, there will soon be yet another way: Apple is calling it Clips.

The company announced the new app on Tuesday, and has pitched it as a fun way to craft great-looking video “without timelines, tracks, or complicated editing tools.” Users will be able to stitch together video clips and photos already on their device, or record new media with a bevy of real-time filters. The app offers a selection of soundtracks, too, as well as the ability to overlay your creations with emojis, stickers, and text to your heart’s content.

More: Want to keep that live video around? Instagram now lets you do just that

All of that is really par for the course when it comes to social-minded video and photo apps, but what really sets Clips apart is a feature Apple has dubbed Live Titles. Users can adorn their videos with animated title cards or captions just by speaking. Clips will convert your recorded voice to text, and the result will appear on screen dynamically in tandem with the recording. 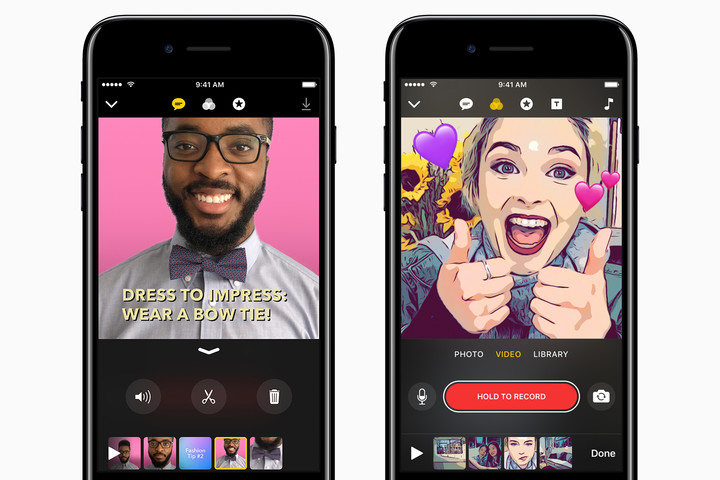 This is a feature that differentiates Apple’s product from the competition, and it should be a hit with those who produce short-form video for platforms like Facebook that are designed to play automatically and discreetly, without sound. Or, you can avoid the short-form thing altogether, as Clips allows you to produce videos that are up to an hour long.

Interestingly, although Clips exists to foster video sharing, it isn’t a social platform in its own right. Users can send their creations to friends via iMessage, of course — an action made easier by Apple’s Smart Suggestions facial recognition, which will recommend people to share with based on the folks that appear in your video or image.

You can also post to Twitter, Instagram, Facebook, or YouTube. But there’s no centralized feed or hub where you’ll see the clips your friends make, or a profile where you can post your own. Apple is sticking strictly to the creative aspect here, and letting other platforms do the heavy lifting of distribution.

The app is still lacking some features. The Snapchat faithful will be dismayed to find they can’t scribble on their videos or photos just yet, for example. Clips is set to release in April for iOS devices running version 10.3. The iPhone 5s, iPad Air, iPad mini 2, and sixth-generation iPod Touch and onward will all be supported.

Read more from News
← Cloud coverage: Adobe debuts its system of cloud software for marketing
Best app deals of the day! 6 paid iPhone apps for free for a limited time →