The LG Stylo 3 is just $179, now available from Boost and Virgin

The surprisingly popular low-end Stylo line gets a third revision.

Sprint’s prepaid subsidiaries Boost Mobile and Virgin Mobile are both offering the latest iteration of the LG Stylo lineup with the Stylo 3, and it’s only going to set you back $179 outright. For that money, you can’t expect much — but LG makes some good decisions here, putting in a big 5.7-inch display, a fingerprint sensor and a big 3200 mAh (removable) battery.

The rest of the specs actually round out fine for such a cheap phone: that display is 720p, and powered by a Snapdragon 435 octa-core processor, 16GB of storage, 2GB of RAM and thankfully Android 7.0 Nougat. The cameras (yes, there are actually two — not a given at this price) are 13MP on the back and 5MP on the front. The hallmark of the Stylo series, its stylus, of course makes a return. 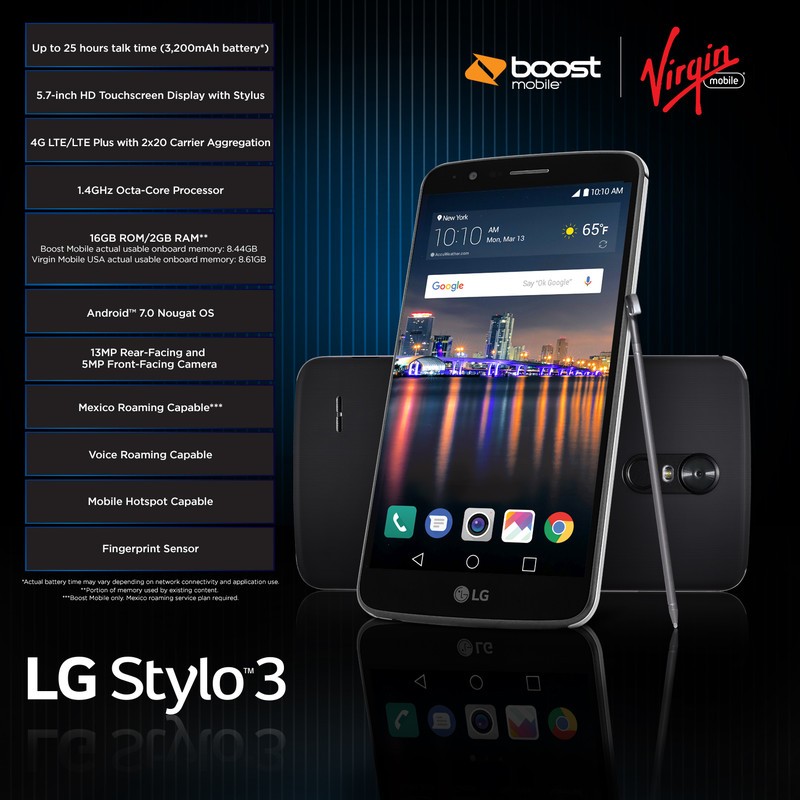 Sure the body is cheap and lacking any design flair, but what the heck do you expect for just $179 on a cheap prepaid plan? Boost will give you “unlimited” data for optimized streaming videos, gaming and music with a few restrictions for $50 per month. Virgin offers a more traditional setup of 5GB of LTE speeds for $35 or 10GB for $45 per month.

If you buy from Boost, the carrier will throw in a $25 Google Play gift card or 32GB SD card as well. Not bad.

Read more from News
← LG G6 will launch in the U.S. and Canada on April 7
Gmail app adds Google Wallet money attachments so you can get paid faster →