Google wants you to have remote meetings via a drone

While most robotic teleconference systems today rely on bots with wheels, this new design suggests that an aerial approach to meetings may be best.

If you already have trouble focusing at business meetings while colleagues are droning on, the addition of an actual drone could either be the best or worst thing to happen to your career. As per a new Google patent, the tech giant has plans for a small, screen-equipped quadcopter that would buzz around a room, bringing the teleconference into the 21st century. While the patent was first filed back in August, it was only made public on Thursday, and came with a couple of updates.

The point of the drone is to help teleconferencing business partners “feel as if they are present, at the same location as that of the second users.” Attempting to replace the standard videoconferencing setup (which normally consists of a stationary camera and screen that makes at least one, if not all, meeting participants look somewhat isolated), the drone solution would fly about the room, focusing in on each meeting member at the appropriate time. Outfitted with a microphone and speakers, this drone idea may just be the closest we’ve come to being together, even when we’re apart. 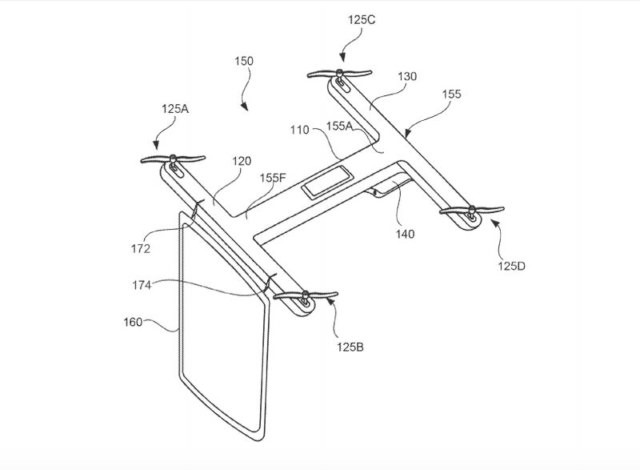 As per the patent, the quadcopter is H-shaped, with a propeller on each of the H’s “legs.” One version of the drone shows a screen hanging off the front end of the machine, while a mini projector sits at the back. The screen’s display area would be “semi-translucent” to allow for the viewing of images projected from the rear.

Also involved in this grand plan appears to be a smartphone with a built-in projector, similar to the Smart Cast phone. And as per the most recently updated patent, the screen system on the drone adjusts itself to ensure that it stays aerodynamic, and the projection system self-corrects whenever images are becoming distorted.

It’s still a work in progress (and nothing more than a patent at this stage), but soon, we could be having meetings with not only other humans, but drones as well. And finally, you’d be able to move around in your remote meetings, and count on your image and your audio remaining stable throughout.

Article originally published in August 2016. Updated on 2-05-2017: Added news that Google’s patent has been updated and made public.