You can still buy the Note 7 in Hong Kong, but you shouldn’t

Hong Kong’s Sincere Podium is home to all manner of mobile devices — be it second-hand phones, imported handsets (mainly from Japan and Korea), spare parts and even prototypes once in a while. This time, the mall appears to be the last place in the city — if not the world — to still be openly selling the Samsung Galaxy Note 7 despite the worldwide recall. Over the weekend, I came across a shop with a glass cabinet full of boxes for the 64GB Note 7, with a bright sticker on one of them saying “Samsung Note 7 dealer goods: Special offer” in Chinese. I didn’t think much of it and simply tweeted a couple of photos, only to be surprised by the posts’ traction over the last two days.

Before I go further, I should probably explain why the amusing sight was only tweet-worthy to me at the time. You see, Sincere Podium is also occupied by several scapler shops — stores that let people trade in their practically new, fully boxed devices (usually iPhones and flagship Samsung phones) for cash, and then the devices are smuggled into Mainland China, earning a profit by dodging the heavy import tax. It’s a shady but lucrative business, which is why smugglers try their best to walk naturally into Shenzhen with iPhones strapped around their waist and limbs; but I’ve heard crazier stories in the past too.

The shop in question was also a scalper. I can’t remember exactly how long it’s been around, but I know that it has always been the only shop in the mall that openly offered to buy up flagship Samsung phones (before the Note 7, the cabinet had boxes of S7 and Note 5 instead). In this case, the shop was clearly having a hard time getting rid of its stock of Note 7, but it was otherwise business as usual, as people kept coming over with their boxed-up iPhones asking for trade-in prices. These prices can fluctuate by the hour, by the way — it all comes down to demand in Shenzen.

Given everyone’s curiosity and amusement on Twitter, I had to do what was right. Today, I went back to said shop and asked how much the abruptly discontinued phones were going for. The answer? A whopping HK$5,980 or about $770 a piece, which isn’t that much of a “special offer” considering that the original off-contract price was HK$6,198 or about $799. It appears that the shop is keen to recover most of its money from these leftover devices. 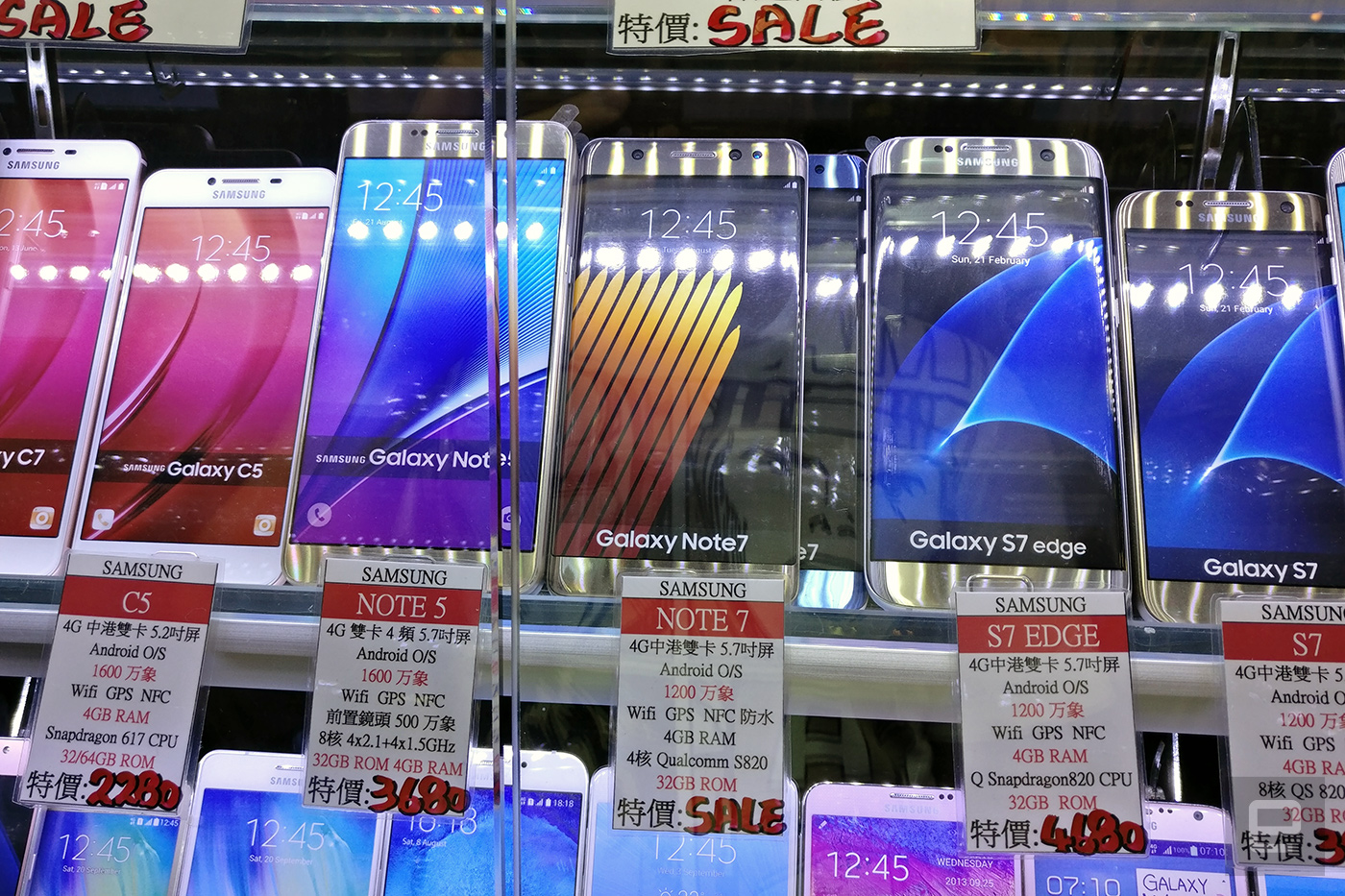 I then walked around the mall and found two more shops that were also still selling the Note 7, albeit more discreetly — simply by way of a dummy Note 7 without the price listed on it. One shop was offering “brand new” Note 7 units for HK$6,298 — yes, HK$100 or about $13 more than the original price — while the other was asking for a more reasonable HK$5,200 (about $670) for the Korean Note 7, which only has 32GB of internal storage.

As I stood in front of the first shop, one of the guys behind the counter implied that since their Note 7 units come with their original receipts, you could take them to their original resellers for an exchange or a refund. But if that’s the case, why didn’t the shop just bring these devices back to their original shops for a refund? I suspect there are two reasons: One is that if the devices were bought with credit cards, then chances are the shops would simply refund with credit instead of cash.

Secondly, it’s likely that some of these phones were subsidized by local carriers, so even if these carriers were willing to give a cash refund, it would probably be of much less value than what the shop paid its trade-in customers. In other words, the shop is probably better off trying to sell these phones to clueless people (which is totally not OK) or to those who are seeking one as a collector’s item (I advise against this).

Unfortunately, it doesn’t seem like there’s anything that Samsung can do about this gray market. In a statement to Engadget, the company’s Hong Kong division said it had already asked “authorised retailers” (note the use of “authorised”) and distributors to stop selling the Note 7 as of October 11th. It also stressed that “consumers should buy Samsung products only from Hong Kong and Macau authorized retailers / distributors / resellers,” and that “the Galaxy Note 7 should not be used nor purchased by consumers for their safety.”

As in most regions, customers who bought a Note 7 from an authorized retailer in Hong Kong are eligible for a refund or an exchange from its shop of origin, provided they have a receipt with a matching IMEI number printed on it.

Read more from News
mobile, News, phone, Samsung
← Apple releases iOS 10.1, adds Portrait mode to the iPhone 7 Plus
What to expect from Microsoft’s ‘Imagine What You’ll Do’ event →