The Good The Ricoh Theta S takes the complex process of capturing and creating spherical photos and videos down to a single button press. Using its Wi-Fi and mobile apps, you can control the camera, and edit and share photos and video. Addition of self-timer gets you better selfies or time to get out of the shot entirely.

The Bad Processing takes its toll on photo and video quality, so just don’t look too closely. Having separate apps for capture and editing hurts the user experience. Video-editing app is currently only available for iOS. You need to upload to Ricoh’s site before sharing to other sites. Because of the twin-lens design, you have to be extra careful how you store the camera and the battery and storage can’t be increased.

The Bottom Line Whether you’re looking to create content for your VR headset or just love cool camera gadgetry, the Ricoh Theta S is an excellent way to start creating spherical images.

Unless you’re really into cameras, it’s probably a surprise that Japanese electronics manufacturer Ricoh — a company best known for its copiers, printers and other office equipment — was the first to launch a consumer point-and-shoot camera for spherical images, the Ricoh Theta.

When it was announced in October 2013, the Theta definitely fell into “niche product” territory, but now with the burst of virtual-reality headsets and other 360-degree photos and video capture devices, it looks like Ricoh saw a category developing well before the likes of Nikon and Samsung. Those companies and others are just getting around to launching their first 360-degree cameras, while Ricoh is on its third with the Theta S.

The design hasn’t changed much from the original, using two ultrawide-angle lenses to capture a fully spherical image when stitched together in camera. For the S, it has twin f2.0 lenses with folded optics allowing for a longer optical path while keeping the body small and still making room for its two 12-megapixel, 1/2.3-inch image sensors that combine to output 14-megapixel spherical images (5,376×2,688-pixel resolution equirectangular JPEGs). It can also record spherical video with stereo sound in full HD at 30 frames per second for up to 25 minutes. (Technically, though, the resolution is 1,920×960 pixels.) 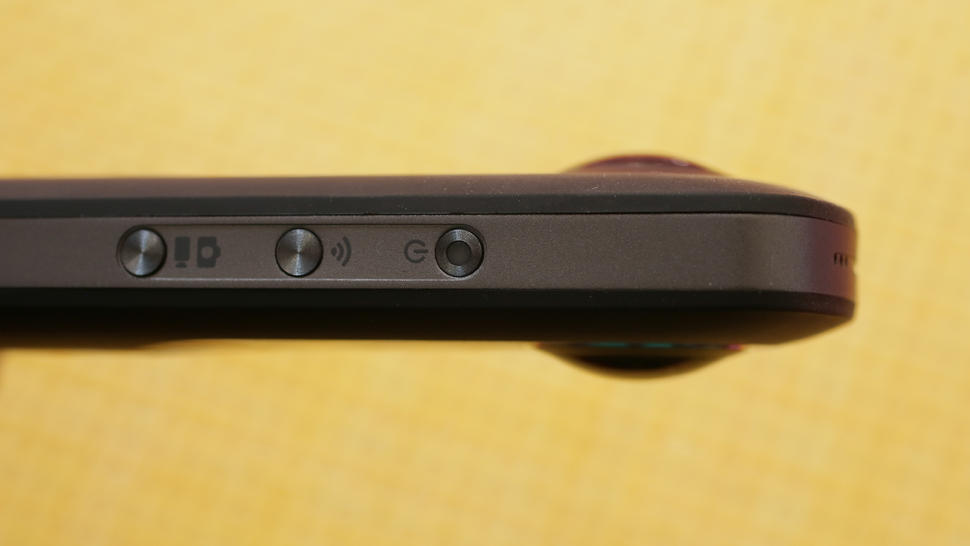 While I definitely like the design for its simplicity and comfort, the lenses are very exposed when not in use so you really have to make sure you store it in its included pouch to keep it scratch-free. Also, the sealed-up body means you can’t replace the battery or increase storage. The 8GB of memory can hold up to 1,600 photos or about an hour of video at full resolution. The battery life is a bit harder to pin down depending on your use, but Ricoh rates it at 260 photos with Wi-Fi on and a shot being taken and transferred to a mobile device every 30 seconds.

Taking a photo or shooting a quick video clip couldn’t be simpler: Turn the camera on with a button on the side and press the shutter release. Since the images are spherical, you don’t even really have to point at anything if you’re just trying to capture the scene around you. But that also means as long as you’re holding the camera, you’ll be in the shot. And, because the shutter release is directly below one of the lenses, your thumb and the rest of your hand will appear much larger than it should be. This is where the camera’s Wi-Fi and self-timer (available with a firmware update) come in very handy, no pun intended.

The Theta’s Wi-Fi kicks on when you turn on the camera, but there’s also a button to switch it on and off. You connect to the camera with an iOS or Android device just as you would any wireless network and then use the Theta S app to control the camera, change settings and view and transfer photos and video to your phone or tablet.

Using your phone to control the camera makes it so you can duck out of the picture if you don’t want to be in it. (There’s a tripod mount on the bottom and the camera can stand on its own as well.) You get a live preview for photos, but not for video. You can, however, connect the camera to a computer via USB or an HDMI input or to an HDMI capture device to view a live stream from the lenses. 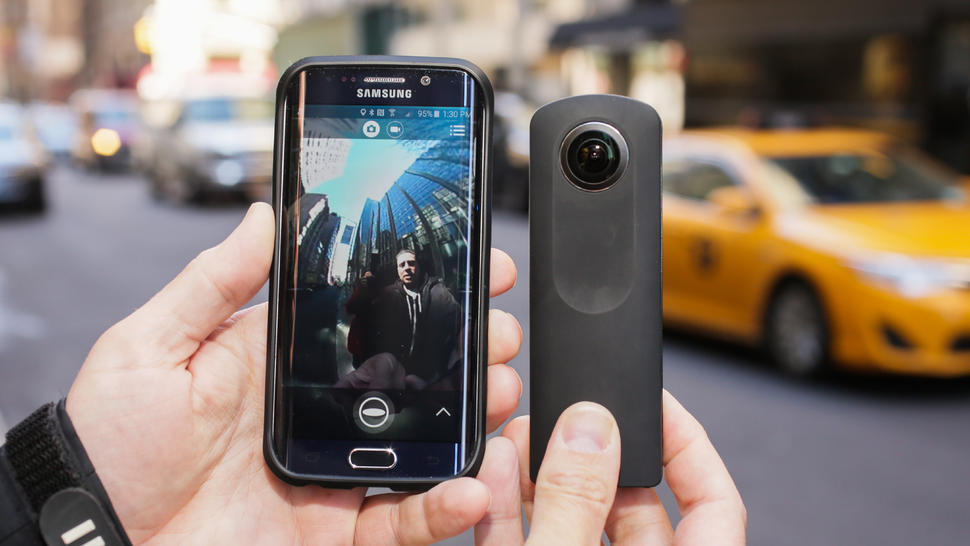 Along with starting and stopping recordings and triggering the shutter, the app gives you access to different shooting modes. You start in Auto mode, but you can shoot with dynamic-range compensation and noise reduction for low-light shots. An ISO-priority mode lets you set the sensor’s light sensitivity and white balance, while a Shutter-priority option gives control over shutter speed (1/8 – 1/6,400 second) and white balance. Or, in Manual mode you can set all three: ISO, white balance and shutter speed (60 seconds to 1/6,400 second).

Once you’ve got a photo or video to share, you can upload to the Theta360.com site and from there share on Facebook, Twitter and Tumblr. A separate app, Theta+, can be used for editing images first, including adding filters or cropping (once you crop it becomes a static image, though). There is desktop software for viewing and sharing, but you don’t get any of the editing features. Also, if you want to edit video, you’ll need a third app called Theta+Video and an iOS device since it’s not available for Android.