The Bad The SE’s sport suspension provides a firmer ride quality that may turn off some customers. In our drives, a rattle from the left B-pillar would annoyingly come and go. The RAV4’s Infotainment system doesn’t offer Apple CarPlay or Android Auto capabilities.

The Bottom Line Those who need the practicality of a compact crossover but don’t want a drab-looking or drab-driving vehicle should put the RAV4 SE on their “must drive” list.

Inside a half-mile of driving Toyota’s RAV4 SE over Michigan’s crumbling roads, I make a mental note of its firmer bump stiffness. The ride isn’t brutal, but it’s rougher — enough to turn off consumers shopping the compact crossover segment who put more stock in a compliant ride, flexible interior space and fuel economy. Lucky for those people, Toyota’s midcycle RAV4 update includes a new hybrid version that caters to those wants, and there’s always the model’s more traditional LE and XLE models.

Clearly, Toyota’s RAV4 range has grown to include flavors for all types of buyers.

Dig deeper into the freshened RAV4 lineup, past the typical changes like new light housings, bumpers, rocker panels and wheel designs, and you’ll also find the new SE model for people who still want flexible interior space and good fuel economy, but prefer their vehicles to be a bit more engaging from behind the wheel. As the athlete in the RAV4 family, the SE gets a sport-tuned suspension; unique 18-inch wheels and a specific styling treatments to give it a little extra visual edge.

Notice that list of SE changes doesn’t include a power increase. Like the majority of sport versions of mainstream vehicles, it doesn’t get upgrades to the drivetrain, meaning the SE works with the same 2.5-liter four-cylinder making 176 horsepower and 172 pound-feet of torque as other non-hybrid RAV4s. That power makes it competitive with heavy hitters in the segment like the Honda CR-V, Nissan Rogue and base Ford Escape. While fuel economy for the RAV4’s full-gas drivetrain understandably isn’t up to the hybrid model’s impressive 34 mpg city and 31 mpg highway EPA fuel economy ratings, the SE’s 2.5-liter four- and six-speed automatic transmission combination returns a respectable 22 mpg in the city and 29 mpg on the highway with all-wheel drive. If front-wheel drive is all you need, then efficiency climbs to 24 mpg city and 31 mpg highway. 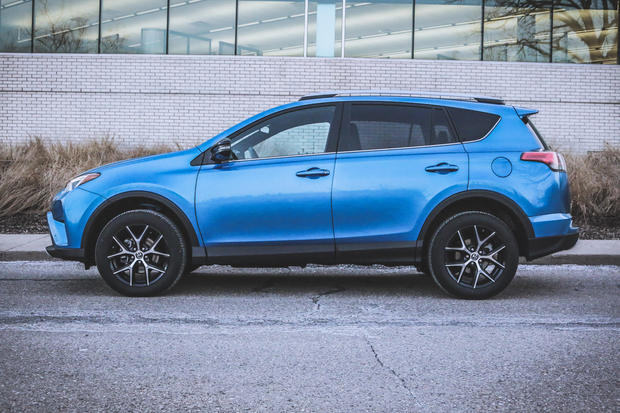 A firmer suspension noticeably improves the SE’s handling, but not without a ride penalty.

Instead, the SE’s performance changes center on the suspension, which improves the RAV4’s handling reflexes, making the small crossover a bit more fun to toss around. Turn-in response is fairly quick, and there’s some weight tuned into the wheel. Grip through corners is good for spirited drives, with not much body lean. The wider footprint from the 18-inch Bridgestone Ecopia H/L 422 Plus all-season rubber deserves some credit for the increase in handling prowess, but don’t be under the illusion that the SE is a skidpad hellion, or that it’s ready to stand at the top of the timesheets at your next local autocross, because that’s not what it’s about. The biggest downside to SE is the aforementioned harsher ride quality, a byproduct of its stiffer springs and shock absorbers.

Unless you’re buying a Ford Escape or Kia Sportage with their available 2.0-liter turbo engines, you’ll have a hard time finding a compact crossover that one might call quick. Instead, most entries in this very popular segment pack serviceable power similar to this Toyota, which motors away from stops in a brisk-enough manner and pulls well throughout the rev range, with its gearbox cycling through the gears smoothly. The RAV4 never feels underpowered. If you want, the SE includes steering-wheel-mounted paddle shifters, but unfortunately they aren’t particularly responsive. I abandoned their use after only a couple of miles.

More of a looker and still functional

Visually, the 2016 RAV4 lineup looks significantly better than before, with new exterior fixings turning what was a previously really bland-looking crossover into a not-at-all-as-bland-looking crossover. That’s especially true with this trim, as it takes things a little further with its standard LED lighting, SE-specific front bumper with larger, honeycombed lower grille insert and 18-inch wheels with black-painted spoke insets. The SE looks particularly sharp with the Electric Storm Blue paint seen here, even if it stands out a little more than I generally prefer. I can’t remember the last time I had random people in parking lots come up and ask me about a compact crossover, but that happened with this RAV4, and a lot of that has to do with its vibrant paint job.

The interior features a clean design, with nice touches including numerous wrapped surfaces with contrasting orange stitching. The SofTex seats — also with contrast stitching — are quite comfortable, with slightly larger side bolsters for additional lateral support. The center stack houses large, clearly marked climate and infotainment buttons that are easier to use than touchscreen controls.