Apple let press go hands-on with the iPhone SE at its launch event and provided several publications with iPhone SE review units ahead of the device’s debut, and we’ve gathered excerpts from each site to highlight the general release reaction to Apple’s new 4-inch iPhone. Reviews and first impressions have been largely positive, with reviewers praising the device’s powerful internals.

The general consensus is that the iPhone SE is the perfect phone for people who want the power of Apple’s flagship iPhone lineup in a small form factor.

TechRadar called the exterior “svelte and sleek,” and said it’s just like handling an iPhone 5s, the phone the SE is modeled after.

The same exemplary precision found on the high-end iPhones is also found on the iPhone SE. At last, you don’t have to feel that you’re settling just to get a phone that’s easier to handle.

Handling the iPhone SE is a lovely affair, particularly if you’re coming from the iPhone 6S Plus. It’s dainty – cute, even – and although, obviously, it feels exactly as if you’re handling the iPhone 5S, there’s something extra novel about it now. It’s no longer the norm; the 4-inch form factor is now the exception.

The Independent speculates that the iPhone SE will appeal most to those who currently use a 4-inch iPhone, as it can be difficult to adjust to a smaller 4-inch screen after using Apple’s larger 4.7 or 5.5-inch iPhones.

Mostly, I’d guess, it will appeal to people who currently have a four-inch display phone. Going back to it from the iPhone 6s Plus with its 5.5-inch screen, took some doing – why, the entire dear little iPhone SE fits within the 6s Plus screen. Using the keyboard on the SE was a learning curve after the expansiveness of the 6s Plus.

iMore pointed out that while the iPhone SE got the 12-megapixel rear camera from the iPhone 6s, the front-facing camera didn’t get much of an upgrade. It’s still 1.2 megapixels.

The front FaceTime camera is still the same sensor as iPhone 5s but benefits from the new ISP and from a Retina Flash. I’m not sure why it didn’t get a bump to an iPhone 6s-level 5 megapixels, because selfies really are a thing and really do need the better camera.

The Wall Street Journal points out the impressive battery life in the iPhone SE, which beats out the iPhone 5s and the iPhone 6s, but criticizes the unoriginal design.

The standout news is battery life. Unlike many other recent Apple products, the iPhone SE’s is a significant improvement over its predecessors’. In my lab stress test, which cycles through websites with uniform screen brightness, the SE lasted 10 hours–more than two hours longer than both the iPhone 6s and iPhone 5s, and nearly three hours longer than the Galaxy S7. […]

The iPhone SE is a win for ergonomic choice, but Apple doesn’t score any points for originality. The new phone is nearly indistinguishable from the three-year-old iPhone 5s, which is a hair thicker and less pleasantly rounded than Apple’s more recent designs. (The SE even fits in most existing 5s cases.)

The Daily Mail says the iPhone SE, with its A9 processor – the same processor in the iPhone 6s – is “blazingly fast.”

Although we’ve only been using the phone for a few days, one thing is clear – it’s blazingly fast. Playing several high intensity games show that this really is as powerful as the current flagship, the 6s.

It’s powered by the A9, the same chip found in the iPhone 6s, and Apple says the iPhone SE has 2x faster CPU and 3x faster GPU performance compared to the older iPhone 5s – and this is something you notice right away, with a far snappier feel the the handset even when its not playing games.

Mashable highlights the $399 price tag, calling it “tremendously competitive” for a device with current-generation technology. 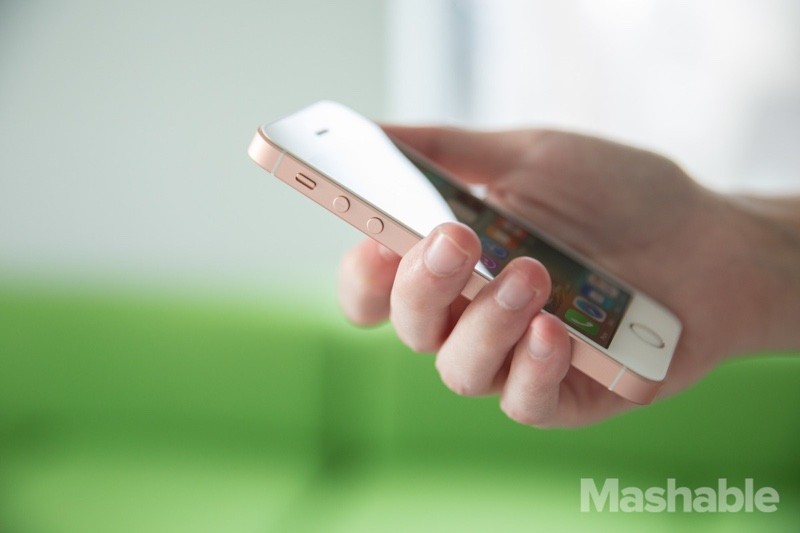 The best thing about the iPhone SE might just be its price. Selling for just $399 for a 16GB version and $499 for a 64GB version, this is a tremendously competitive phone. Most $400 phones are not going to give you the latest-generation processor and camera technologies. I really can’t underscore how well I think this product will do, simply based on its price.

Consider that the iPhone 6S starts at $649 for a 16GB version. Yes, it has more features — including 3D Touch, a better front-facing camera and a larger display — but the price point Apple has set will be very compelling.

Pre-orders for the iPhone SE started at 12:01 a.m. on March 24. The device can be purchased from the Apple online store, with deliveries and in-store availability set to begin on March 31. While the 16GB iPhone SE models are still in stock and will deliver on that date, the 64GB iPhone SE models have proven more popular and shipping estimates have slipped to five to seven days. Pricing on the iPhone SE, which is Apple’s most affordable iPhone, starts at $399.

Related Roundup: iPhone SE
Discuss this article in our forums

Read more from News
← Sony PlayStation 4K: What is PS4.5, when is it coming and how will it affect VR?
On the Brink of Greatness: Startup Workspaces →