The Good The Galaxy S7 Edge has a gorgeous larger curved screen and larger battery than the otherwise identical standard S7. It really is something special. The extra navigation tools can be useful when used judiciously.

The Bad When you pile on these extra navigation tools, they slow you down rather than speed you up. It’s pricier than other good phones.

The Bottom Line The gorgeous Galaxy S7 Edge makes the best Android phone that much better.

Here’s the phone should you buy right now: This one. What catapults the Samsung Galaxy S7 Edge to such heights? Is it the excellent camera, the beast of a battery, the expandable storage or the seductive design that’s worth more than the sum of its parts? Yes, and more. This phone kicks the already-fantastic (just slightly smaller) Galaxy S7 up a notch with a bigger battery and that wraparound design on both sides that never fails to draw me deeper into whatever I’m viewing or doing.

Everything about the 5.5-inch S7 Edge excels from the inside out, and Samsung has refined the extra navigation software that dresses up the screen’s physical curves. There are of course a few minor drawbacks — there’s no such thing as a perfect device — but something about it feels more organic than your garden-variety phone, more complete. If you’ve ever seen one of Samsung’s curve-screen phones before, such as the S6 Edge, S6 Edge+ and Note Edge, you know what I’m talking about. 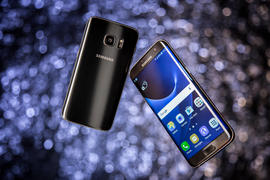 The Samsung Galaxy S7 Edge is the larger, sleeker of the two phones.

Samsung has put a lot of effort into making the secondary menu bar more useful: icons get bigger and there are more types of information you can show there, like a shortcut to your favorite apps and tasks. There’s a speed dial to your favorite contacts, an optional pane for sports scores and news headlines, even a tool to pull up the flashlight and ruler. These are handy, just use them sparingly.

Is the Edge worth the higher price compared to the S7? If you have the cash, then yes. For me, the phone’s shape is reason enough, like how a car enthusiast might upgrade to a leather interior. The extra cost spreads out if you pay by installments; even if you pay in full, the difference diminishes when you consider you’ll probably own this phone for the next two years.

That said, you wouldn’t be making the mistake of your life by going for a more wallet-friendly phone like the Google Nexus 6P or even the S7. But if you want the most stylish, most all-in-one phone that money can buy, you’ve found it.

The S7 Edge goes on sale March 11 and starts at $750, £639 and AU$1,249. Read more about the S7 Edge’s top-notch software and hardware in my full Galaxy S7 review, and read on below for more on the Edge’s software, battery performance and specs.

I liked being able to jump into the edge display navigation from any screen, without having to go back to the start screen as you would normally have to do. This was an easy way to reach out to a favorite contact and my most-used app.

At first, it’s fun to hit the nine-tab ceiling and try them all, but pretty soon I realized that if I didn’t know exactly which pane I wanted, I wasted more time looking for it than if I had just gone to find the thing I wanted from the home screen in the first place. Three or four of these add-ons hit the sweet spot.

Also, some panels that I’d want just don’t exist yet, because the companies haven’t made plugins.

Swipe, swipe and away!