Microsoft study shows that tech is shortening your attention span

Think the abundance of technology in your life is making it harder to concentrate for long periods? Microsoft might just have some evidence to support your theory. It recently published a study (conducted using both surveys and EEG scans) suggesting that the average attention span has fallen precipitously since the start of the century. While people could focus on a task for 12 seconds back in 2000, that figure dropped to 8 seconds in 2013 — about one second less than a goldfish. Reportedly, a lot of that reduction stems from a combination of smartphones and an avalanche of content. Many younger people find themselves compulsively checking their phones, and the glut of things to do on the web (such as social networking) makes it all too easy to find diversions.

Thankfully, it’s not all bad. While tech is hurting attention spans overall, it also appears to improve your abilities to both multitask and concentrate in short bursts. You not only get a better sense of what deserves your attention, but do a better job of committing useful things to memory. There are limits to these improvements (heavy social networking tends to make things worse as a whole), but you can take comfort in knowing that there’s an upside to your gadget addictions.

Welcome to the Sunday Giveaway, the place where we giveaway a new Android phone or tablet each and every Sunday.

A big congratulations to last week’s winner of the LG G4 giveaway: Reinaldo from the United States of America.

This week we are giving away a Samsung Galaxy S6!

The Samsung Galaxy S6 has landed, bringing with it a much needed injection of premium materials. Trading in its typical plastic design language, the latest Galaxy S family member features an aluminum frame sandwiched between a glass front and back.

Aesthetics are a major upgrade for the Galaxy S6, but that’s far from all that’s on offer. The phone also has a cutting-edge Exynos 7420 processor inside with 3GB RAM, and stunning 5.1-inch QHD display and a solid 16MP camera with OIS technology.

Bottom-line, the Galaxy S6 takes all of what we love about the S series and catapults both the design language and software forward, making this easily the most exciting Galaxy S to date.

Android fans, this week was relatively quiet, but we’ve still got a few glimpses of exciting new devices coming soon. HTC launched yet another high-end smartphone in Japan and hinted it may try its luck with a low-end tablet; Xiaomi opened up its store in Europe, while specs of its next Redmi device leaked out; Google launched a new and greatly improved Android One device and issued a big update to its Play Music web app; the Galaxy S6 Active surfaced; Oppo revealed its R7 and R7 Plus; and Asus revealed it’ll launch a new smartwatch at Computex.

We’re already in May, and that means we’re heading for an interesting time in the mobile industry, as companies rush to make their big announcements before the inevitable summer lull. Without doubt, the most interesting upcoming event is Google I/O on May 28; with Android M all but confirmed to be announced at the conference, it looks that we’ll have another preview edition to geek over in the summer months.

New devices are coming: Oppo has the R7 and R7 Plus launching next week, and Josh will be in China to cover it. Back in the States, Nvidia has an Android gaming announcement, Asus is about to launch the Zenfone 2, and Huawei has a surprise for early June. Computex is taking place in Taipei in the first week of June and we expect a smattering of Android tablets and Asus’ new smartwatch. And there’s E3, and given how mobile is becoming a key focus for companies like Nintendo, Konami, or Square Enix, we look forward to quite a few interesting mobile gaming announcements.

We’re expanding our team with some bright new people, including an absolute expert in electronics and electrical engineering. Expect some great deep-level articles on the topic soon.

As always, take a few seconds to enter our weekly giveaway, this week we are giving away a Samsung Galaxy S6! You never know when luck strikes and you get yourself a hot Android device!

The stuff you shouldn’t miss

Top news of the week

And here are the top news in the Android world this week:

HTC thinking about a cheap tablet

This is the Oppo R7

We always want to hear your feedback. Whether it’s criticism or praise, feel free to tell us what you think about Android Authority’s content, design, and community. Comment here or get in touch with us on our social channels:

Look, we know this sea turtle’s prosthetic beak has a tragic backstory, but it sure makes the reptile look like it has a future as a badass pizza-loving mutant. According to 3D Printing Industry, Turkish animal rescuers found it almost lifeless at sea, after a boat propeller shaved off a huge part of its snout. It escaped the clutches of death thanks to those kind folks, but a turtle that has to be hand-fed can never survive back in the wild. That’s why the organization contacted 3D printing service provider BTech Innovation, which took the turtle’s CT scans to create a beak that would fit it perfectly.

The company recreated the reptile’s upper and lower jaws through software, and it printed out the resulting design using medical-grade titanium. That beak has been surgically attached recently so the critter’s still in recovery, but it’s doing just fine, as you can see in the video below. Once it’s done recovering, the rescuers plan to release back to the ocean to live a normal turtley life. We’re happy for it — we really are! — but we’re also kinda sad that it would probably never meet the tortoise with a 3D-printed shell.

NASA competition pays you to design a 3D-printed habitat 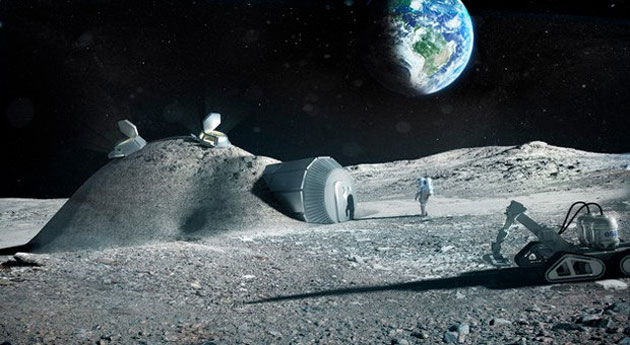 If NASA is going to put humans on Mars and other distant worlds, it’s going to need a place for explorers to stay — and it wants your help building those extraterrestrial homes. The agency has launched the 3D Printed Habitat Challenge, a competition to develop the best artificial housing for space exploration. The first phase of the challenge will award a $50,000 prize based on pure architectural merits, while a second will hand out two $1.1 million prizes for those who figure out how to manufacture individual components and whole shelters from “indigenous materials,” such as rocky soil. NASA hopes that the winning ideas will make it possible to settle alien terrain without bringing mountains of Earth-made construction supplies. That would not only let crews pack light, but fix their own abodes if something goes wrong millions of miles from Earth.

In a tweet that has since been removed, Samsung gave us a teaser of the Iron Man edition of the Galaxy S6 Edge.

It is not known what the device looks like, but the renders below, courtesy of TechCrunch, may not be too far off from what its actual design.

The tweet also included a disclaimer, saying that availability for this limited edition of the S6 Edge would “differ by region.” There is no guarantee that the phone would come to the U.S., but it is likely considering the fact that Iron Man is an American trademark.

However, the Mate 8 is slated to be powered by Huawei’s in-house produced Kirin 930 processor. The next Nexus is believed to be equipped with a Snapdragon 810 processor despite the controversy swirling around that chip. This newest source indicates the Nexus device could be powered by a Kirin 950 chip, which is likely Huawei’s next generation following the Kirin 930.

Other hardware details are still unclear, especially the construction of the device. If based on the Mate 8, the new Nexus device should give the impression of a high quality smartphone, possibly employing a metal chassis and lots of glass.

Come comment on this article: Huawei produced Nexus smartphone based on Mate 8

The latest version of Android Wear, version 5.1.1, available on the new LG Watch Urbane or the ASUS ZenWatch, has a new option available for users wanting to access their Google Play Music library. Choices for Listen Now, Recent Playlists, and Radio are now available to users.

Listen Now gives users the ability to scan through albums, playlists and radio stations that have recently been accessed. Recent Playlists can be viewed and users can drill down to songs that they  have given a thumbs-up to and recently added content. Finally Radio will bring up a list of Google Play Music radio stations.

Users will notice that they do not have the ability to go through their entire catalog of music via Android Wear. This mimics the functionality of Android Auto in keeping users from focusing for too long on the interfaces of Android Wear or Auto.

It’s no secret that luxury designers see Chinese online stores as a haven for fake goods, but they’re now taking concerted action to shut down these less-than-official outlets. Kering, the parent company behind brands like Gucci and Yves Saint Laurent, is suing shopping giant Alibaba for allegedly letting counterfeiters sell their wares in the US and elsewhere. The company did nothing to shut these operations down even when told what was going on, according to the complaint. Kering had tried suing Alibaba last July, but it dropped the case in hopes of hashing out a deal — clearly, those negotiations didn’t get very far.

For its part, Alibaba insists that it has a “strong track record” of working with companies to shut down counterfeits. It sees the lawsuit as “wasted litigation” whose energy is better spent on a cooperative hunt for ripoff peddlers. Whether or not the company is doing enough, the stakes are high. If Kering prevails in court, it may get Alibaba to pay $2 for every bogus product its merchants sell. As you might imagine, that could become very expensive if the retailer doesn’t succeed in cracking down.

Sprint has expanded its free international roaming plan to six more countries: Colombia, Denmark, Honduras, Ireland, Italy, Paraguay and Sweden. That makes the new total 22, including the original 16 locations the company named when it launched the free data and unlimited text messaging in April. Obviously, it still can’t compare to T-Mobile’s similar service that works in 120 countries, but it’s still good news for the carrier’s subscribers. That said, it doesn’t sound like the plan’s 64kbps max speed — yes, that’s the maximum — has gone up since launch. So if customers need something a little less, um, glacial, they might have no other choice than to pay up.