Apple to Bring Back Camera Roll in iOS 8.1 [iOS Blog] 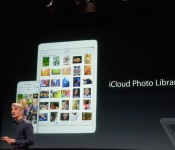 Today at its media event in Cupertino, Apple SVP of software engineering Craig Federighi announced that Camera Roll would be returning to the Photos app in iOS 8.1. Apple had removed Camera Roll with iOS 8.

Photo courtesy of The Verge
The Photos app in iOS 8 splits a users’ photos between three sections: Photos, which organizes photos into years, collections and moments, iCloud Photo Sharing and Albums, which contains an alternative to Camera Roll in a “Recently Added” album that organizes photos by date.

Camera Roll allowed users to have easy access to their recently added photos without having to go into a photo within a section of the Photos app, which caused many users to be upset by the loss of the feature. iOS 8.1 will be released on Monday, October 20.

Read more from News
Apple
← Apple Announces iPad Mini 3 With Touch ID Home Button, Gold Color Option
iPad mini 3 vs. the competition: Which will you hold in one hand? →