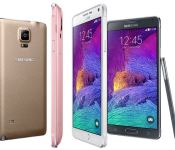 Seems the Samsung Galaxy Note 4 has received a rather well-timed set of announcements from all the major carriers. Some are a bit more up front and open about details than others.

AT&T is a little more convoluted in their announcement and availability, especially since they multiple purchasing options. They are the first to offer pre-orders though with the date being September 19th. That is tomorrow. With expected shipping on October 14th. They don’t go out of their way to say it will be launched officially October 17th, but rather that  “Full retail sales will be announced at a later date.” I wonder if they are banking on pre-order to deplete stocks. Pricing will depend on you. Next 18 will be $34.42 per month and Next 12 will be $41.30 per month. A new two-year contract puts it at $299.99 and full retail is $825.99.

Verizon is about as forth coming with information as ever. Basically they don’t say much of anything in their news releases. What they do let us know though is that the Note 4 will be available for pre-order starting September 19th.  Pricing offers up the same $299.99 two-year contract price as AT&T. They don’t offer the monthly details on the Verizon Edge program. Assuming they are pricing the device at $825.99 like AT&T, then on the Edge program is should be in the neighborhood of 41.29 for 20 months. That is just a guess though.

I heard from Sprint prior to thinking that I should think about the other guys. Sprint is putting the Note 4 up for pre-order on September 26th with a launch date set for October 17th. Pricing is $0 down and $30 a month for 24 months. However, they list the SRP at $720 (excluding tax).

None of them detail any color options. However, Samsung’s press release mentions Charcoal Black and Frost White. They also state that the Note 4 launches October 17th. While a few of the big guys above didn’t want to push that date out just yet. Samsung also tosses in US Cellular in their news, but US Cellular hasn’t published anything official yet. I think it is pretty safe to assume that they will be launching on the 17th of October also.