Report: Snapchat exploits can steal your private info, expose you to spam 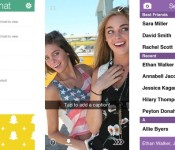 A group of security researchers has published a pair Snapchat security exploits, claiming the popular social startup has ignored requests to address them since August — prior to any Facebook acquisition talk. The Gibson Security team is hoping that’ll force the company to respond to the problems, which they say could pose serious privacy risks for both iOS and Android users. The first bug could help a hacker suss out private user details like phone numbers, while the second could be used to create masses of dummy accounts. Together, they could be used by spammers, or worse, stalkers, provided they roughly know the location of the target. Now that the code’s out in public, anyone with technical know-how could exploit the bugs, which the team said could be fixed with “ten lines of code.” If true, hopefully Snapchat will jump on them quick — check the source for more.