This week’s podcast ditches the studio and delivers the mellifluous voices of Brian, Terrence and Billy without all that video nonsense, leaving much to the imagination. The news tidbits are real, however, and the discussion launches into tasty gadget gifts, spearheaded by Apple’s shiny new Mac Pro. Avegant has a new immersive display arriving soon and Canonical is giving the gift of dual-booting this season, so that Android users can get in on the Ubuntu experience, too. It’s a festive bit of banter this week, so heat up those leftovers, grab a tasty beverage and settle in for another edition of the Engadget Podcast.

04:30 – Apple Mac Pro review (2013): small, fast and in a league of its own
04:43 – UK pardons computing pioneer Alan Turing
12:15 – Avegant tests Glyph wearable display prototype, on track for CES debut
16:18 – BlackBerry’s latest casualty: Two unreleased phones
29:24 – Swiss researchers created a cube that can sit, jump and walk (video)
38:01 – HP’s new tablets may be its way back into the smartphone world
41:19 – Canonical gives developers a preview of a dual-booting Ubuntu and Android future

Connect with the hosts on Twitter: @bheater, @terrenceobrien, @wmsteele
Email us: podcast [at] engadget [dot] com

With the first new Mac Pro units having made their way to reviewers and even some early online orders arriving in the closing days of 2013, more details on the new machines are continuing to surface.

Other World Computing (OWC) has performed a quick teardown on one of the new machines, and while documentation currently consists of only a small set of photos, the company has confirmed that the Intel Xeon E5 processor found in the Mac Pro is indeed removable, allowing for future upgrades. All four available CPUs for the new Mac Pro use the same LGA 2011 socket standardized on the Mac Pro’s motherboard.

The main processor is one of the most significant variables in the cost of the new Mac Pro, with the four available CPU options spanning $3500 in upgrade charges. Pricing relative to the stock 3.7GHz quad-core Intel Xeon E5 with 10MB of L3 cache is as follows:

Using a removable socketed processor rather than the soldered processors found in most of Apple’s Macs means that users may be able to upgrade their machines in the future as their needs change and/or chip prices decline.

Earlier this week, OWC also shared a photo showing the new Mac Pro driving a total of six 27-inch displays, each with a horizontal resolution of at least 2500 pixels. The new Mac Pro offers six Thunderbolt 2 ports for connectivity, allowing for a number of combinations of displays and other peripherals. 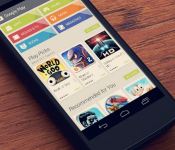 Motorola took to Twitter and announced that the Moto G will be available in India at the beginning of January 2014. We knew that India and other countries would be seeing the Moto G eventually but this is the first confirming timeline as to when that will happen. No word on other countries and release dates as of yet. There is no word on pricing of the Moto G in India but Softpedia reports that it should be running Android 4.4 Kit-Kat, which is always a plus.  The Moto G has received great praise among the tech media for its affordability and cost. So to our Indian readers, keep your eyes peeled for Moto G to hit your carriers soon. Hit the link for source.

Check out Alex’s other work on Techaeris.com

Still looking for some great deals around the web? Perhaps you need some new tunes to drop into your Google Music account to cast to your Chromecast or play on your new tablet. Google has you covered today. Right now you can pick up the entire Yeezus album by Kanye West free of charge.

It is kind of funny though, they offer one track for free and all the rest for $1.29 each, but you can get the whole album for free. A great deal if you are in need of some music and Kanye is an artist you like. Head to the Play Store and pick it up real quick before its gone. There is a good chance this is a US only offer, so don’t be surprised if you can pick it up out side of the states.

Small Update: It looks like you can also snag “The Bones Of What You Believe” by CHVRCHES for free as well. Double free albums. Snag it from here. 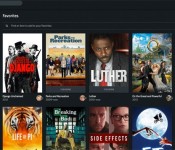 Rdio was a bit late to the game when it announced its movie streaming service, Vdio, earlier this year. The spinoff site was available in beta form in the US, the UK and Canada, offering blockbuster flick rentals for $6 and movie purchases for up to 20 bucks. Rdio took Vdio offline today, however, citing an inability to differentiate its offering in a very crowded market. Customers who purchased movies and TV shows or have unwatched rentals will receive compensation in the form of Amazon gift cards, while promotional credit will expire. Click through for a surprisingly succinct FAQ.

We don’t expect this back and forth to flame out any time soon, of course, but a US District judge in Manhattan certainly issued a blow to an American Civil Liberties Union challenge of the National Security Agency’s massive telephone data collection. The judge acknowledged that the agency has, indeed, been “vacuum[ing] up information about virtually every telephone call to, from, or within the United States,” but said he saw no evidence that it was being used for anything beyond attempting to foil terrorist plots, denying the ACLU’s motion for preliminary injunction. The ACLU hasn’t issued a statement on the matter yet, but we imagine it’s not giving up the fight any time soon.

Update: You can now read the full ruling here in PDF form.

Bitcoin exchanges shut down after threat from India’s central bank

Bitcoin is quickly beginning to attract the attention of regulators in a number of countries. After a flat-out ban in Thailand and restrictions on banks in China, now several Indian Bitcoin exchanges have suspended operations following a warning from the Reserve Bank of India concerning digital currencies. Issued December 24th, the statement outlines the risks of a purely electronic wallet, unregulated transactions and value fluctuations. It also contains what could be considered a threat, however, stating that virtual currency users could be breaking money laundering and terrorism financing laws — one report from the subcontinent suggests the government has carried out the first raid on a Bitcoin exchange, too. Thus, some sites have decided to close for the time-being, leaving notes on their homepages expressing the need for clear legal guidelines before trading can resume. Undoubtedly we’ll see more countries take steps towards regulation, especially as the price of currencies rise. Nothing decreases something’s worth like outlawing it, after all.

Via: The Next Web 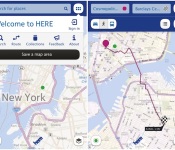 In the wake of a rocky launch of Apple’s mapping services as part of iOS 6 last year, Nokia debuted its own iOS app bringing its “HERE” maps to the platform in the form of a free app. Based on the NAVTEQ mapping data used in many vehicle navigation devices, the HERE iOS app included a number of features including offline mode and transit and walking directions.

Earlier this month, HERE quietly disappeared from the App Store, and The Indian Express reports (via Engadget) that Nokia has now issued a statement blaming unspecified changes in iOS 7 for driving the company’s decision to remove the app.

When approached for a comment, a Nokia spokesperson sent The Indian Express an official statement. It read, “We have made the decision to remove our HERE Maps app from the Apple App Store because recent changes to iOS 7 harm the user experience. iPhone users can continue to use the mobile web version of HERE Maps under m.here.com., offering them core location needs, such as search, routing, orientation, transit information and more, all completely free of charge.”

As the report notes, the HERE iOS app was not particularly well received by users, having suffered from a number of bugs and received no updates during its year on the App Store. Consequently, it seems likely that poor adoption and an unwillingness by Nokia to invest significant effort in fixing the app’s issues played significant roles in HERE’s demise on iOS as well.

Without more information from Nokia, however, the exact set of circumstances leading to the removal of HERE remains unclear, and it is unknown exactly what changes in iOS 7 the company is referring to in its statement. Some users have criticized the look and feel of the redesigned operating system, with some usability issues also having been raised.

The dramatic design change in iOS 7 has also led many third-party developers to invest significant resources in redesigning their own apps to match the new aesthetic, and perhaps Nokia simply felt that it did not want to commit to make the necessary changes and improvements to its iOS app in order to attract and retain users. 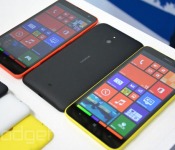 Large-phone lovers on a budget, rejoice: Nokia’s 6-inch, $339 Lumia 1320 smartphone is now available in China. That’s a bit earlier than the January 2014 time-frame it first promised, and the Finnish company said it’ll also roll out in Taiwan, Hong Kong, Singapore and other countries (likely in Europe) in the coming weeks. It packs a whopping 3,400mAh battery for the long-winded, but otherwise has middling specs: a 720p screen, dual-core 1.7GHz Snapdragon 400 CPU, 1GB of RAM, 8GB of expandable storage and a 5-megapixel camera. Unfortunately, there’s no word of an arrival date for those in the US torn between a tablet and phone — but given the LTE bands we saw at the FCC, don’t hold your breath.

Mobile trade organization CTIA has launched Know My App, a website dedicated to informing consumers about the impact that specific apps have on data usage, reports PCWorld. The group notes that while tools have been available to measure an app’s post-installation impact on data usage, the new website is the first to measure data usage before a download.

Currently, the site allows users to search for an app by name, operating system or category, and currently includes test results for the top 50 paid and free apps from the App Store and Google Play. CTIA also pledges to add more apps to the database in the coming months, and is also inviting developers to submit their apps for testing.

The website was developed in a joint effort between product testing company Intertek and CTIA’s Application Data Usage Working Group, which includes members such as Apple, Cisco, Google and LG. The tool also comes as wireless providers such as AT&T and Verizon have imposed different policies on data usage throughout the past few years with the offering of tiered data plans for customers.