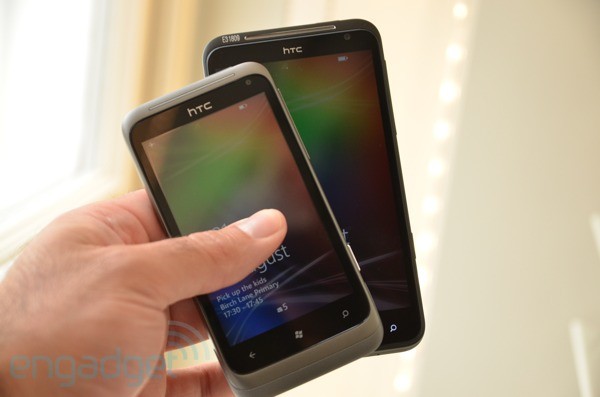 HTC just threw two new Windows Phone handsets down on the table and politely requested that we be impressed. The high-end Titan (previously leaked as the ‘Eternity’) is indeed an awe-inspiring brute, wielding a 4.7-inch SLCD display, 8MP rear camera and 1.3MP front-facing snapper to take full advantage of Mango’s newfangled Skype integration. Its over-sized guts include a single-core 1.5GHz processor, 512MB of RAM and up to 16GB of fixed flash storage. Meanwhile, the Radar (which also recently leaked out as the ‘Omega’) comes significantly less pumped in order to meet a lower price point and — we suppose — the expectations of a more mainstream audience. It can be seen as an updated Trophy, with similar weight and dimensions, plus the same 3.8-inch LCD, 1GHz processor clock speed, 5MP rear camera resolution, RAM and maximum 8GB fixed storage. The key upgrades involve the cameras: HTC says it has an improved 28mm wide-angle lens on the rear, plus of course there’s the front-facer, which is unfortunately only VGA. Although HTC intends to update its existing WP7 range to Mango starting in mid September, the Titan and Radar will be the company’s first innately Mango-fied devices when they arrive in early October. What do we make of them? By all means, click past the break to find out.