Can a Google Home stand up to kitchen spills and bathroom sprays? 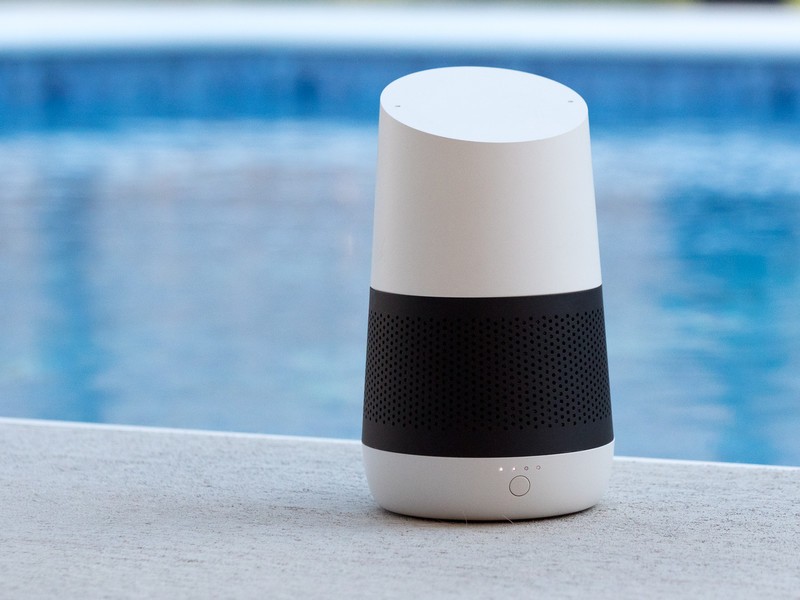 Best answer: Nope, the Google Home is many things, but waterproof is not one of them. If you want a Google Home you can use in water-prone areas like your shower singalongs or poolside parties, grab a waterproof Google Assistant-powered speaker like the JBL Link 20 instead.

Style, not sturdiness: Why the Google Home is not waterproof 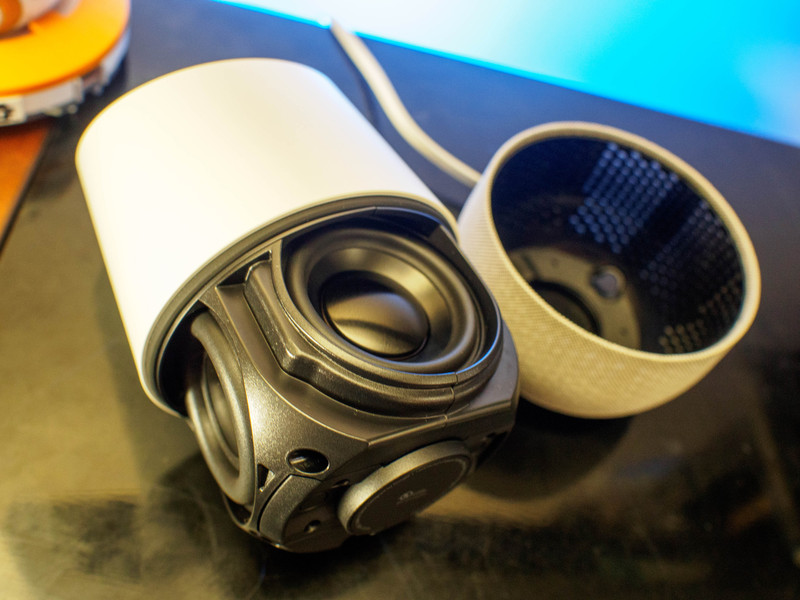 The housing of the Google Home speaker and the wiring within it is not sealed enough to prevent water from getting inside. After all, the Google Home has those cute, swappable fabric and metal bases — as well as battery bases like the LOFT base seen at the top of this article, and those just cling to the speaker with magnets rather than any kind of secured clips or rubberized seals. The power adapter also plugs into the very bottom of the unit, meaning that spills on the kitchen or bathroom counter could seep into the power port on the bottom of the unit and potentially short out your Google Home, which would be a lousy way to lose a $130 speaker.

Waterproofing a speaker requires extra time, extra effort, and would have likely increased the size and/or the price of the Google Home. For a speaker that’s going to be chained to an outlet anyway, waterproofing doesn’t make as much sense as it does for portable speakers that tend to follow us everywhere. It’s understandable that Google did not pursue it for the Google Home, but thankfully, there are other options that are waterproof.

Back in 2016, if you wanted a speaker with Google Assistant, you had to use a Google Home. Now you have choices.

When the Google Home was the only speaker with Google Assistant inside it, I could understand using it in the bathroom, but Google opened up Google Assistant to third-party speakers years ago. These days, there’s plenty of Google Assistant speakers on the market for you to choose from, including several that have internal batteries and water resistance, so that they can be used or backing up my shower show tunes sing-along. While smaller speakers like the TicHome Mini are easier to hang on a shower hook to keep your tunes close, the JBL Link 20 boasts a bigger sound and lasts hours longer before it needs to go back on its charger.

What if I really want to use a Google Home in the bathroom?

When the original Google Home was announced back in 2016, I was practically drooling at the prospect of owning one. The Google Home’s keen microphones could make out commands from across a crowded room, or over the sounds of a shower, and that made it a must-have for controlling my shower songs hands-free. The Google Home was not and is not waterproof, but it was the only option, and so I bought one and set it on my bathroom vanity. 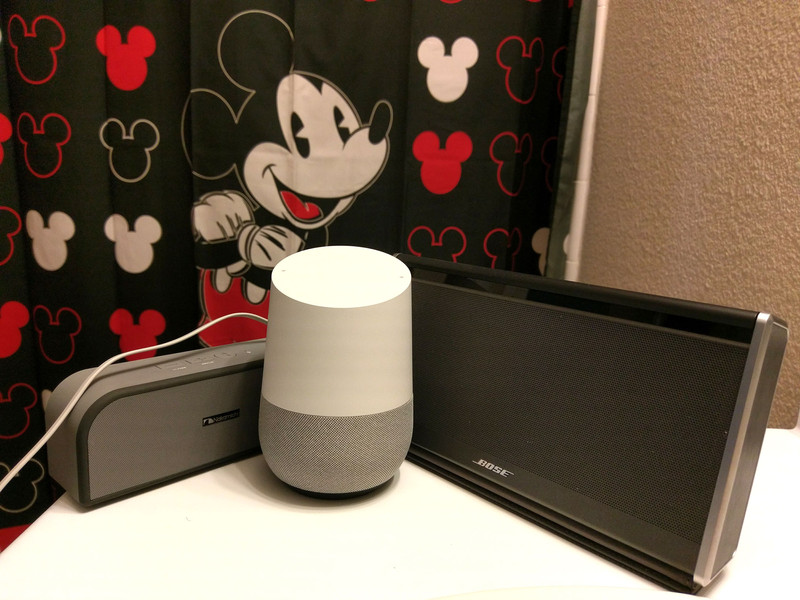 After a year and a half of sitting on my bathroom vanity through steamy showers, my Google Home still works, but the mics inside it aren’t quite as accurate at picking up my “OK Google” commands as it was when it was new. I also bought a third-party Google Assistant speaker with waterproofing — and portability — like the JBL Link 20 as soon as it was available so that I could retire the Google Speaker to a steam-free environment.

Considering the JBL Link 20 is only $30 more expensive that the original Google Home — which you should not be buying at list price over two years after its release — and has a bigger sound, better water resistance, and a big battery for portable playback, it is absolutely worth the upgrade. 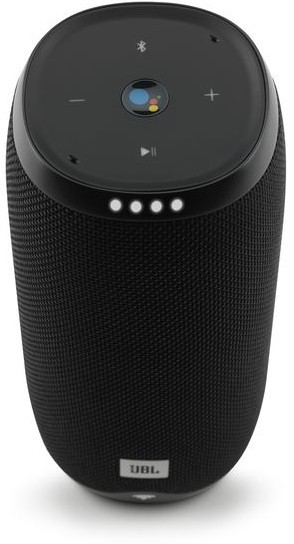 Bring Google Assistant to any part of your home, wet or dry!

This tall speaker is more rugged than the Google Home, but it also has a bigger sound and a 6,000 mAh battery for up to 10 hours of portable playback. The IPX7 waterproof JBL Link 20 can bring Google Assistant to places Google Home cannot, like the backyard, basement, or bathroom. 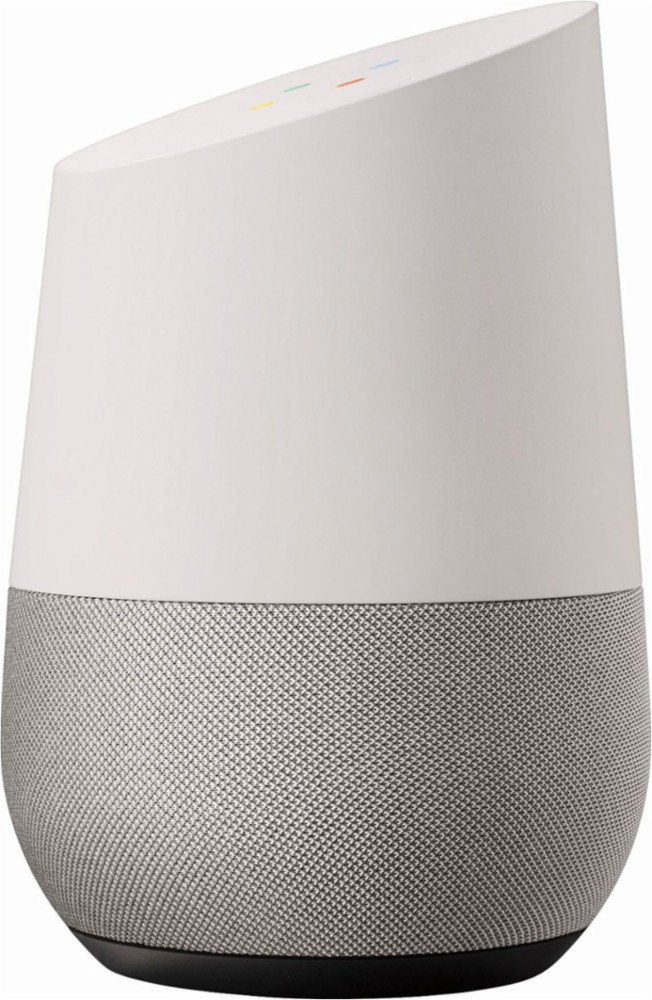 Google’s original smart speaker is an iconic device you should not pay full price for anymore.

We love the original Google Home, the first smart speaker to come with Google Assistant, and it’s still a nice little speaker today. It may not be the newest speaker on the block, but it can still give you the latest and greatest Google Assistant commands. Just don’t pay 2018 prices for a 2016 speaker.

Read more from News
← Table Tennis Touch is a top-notch sports sim game and our game of the week!
Galaxy S10 to drop iris scanning in favor of in-display fingerprint sensor →