This year marks the sixth anniversary of the first products launched by Philips Hue in October 2012, with an original system that came with three Hue bulbs and one bridge and was sold as an Apple Store exclusive. Over time, Philips Hue added HomeKit support after Apple introduced the software framework in 2014, and numerous new bulbs, lamps, lightstrips, and more have come out of Philips Lighting — now Signify — over the past six years.

The latest lamps are a collection of fixtures that highlight your entertainment area, with one taller set (Hue Signe) and one shorter set (Hue Play) offering new and unique ways to attain bias lighting around your television, favorite pieces of art, and more. Signify sent me one pair of Hue Play lights for the purpose of this review, and over the past few weeks I’ve come to enjoy them as the latest addition to my dozen-bulb Hue setup, although I have yet to find them as indispensable as my other HomeKit devices and lights.

Like any new Hue bulb added onto an existing ecosystem, initial setup for Hue Play was pretty seamless. Out of the box, Hue Play comes with two light bars that each have a cord to connect with the main AC power adapter (which itself can power up to three Hue Play light bars). If you’re going to lay Hue Play flat, you won’t have to do anything but plug them in to an outlet and place them on your entertainment center, floor, etc.

If you want to stand them up, Hue Play comes with two black plastic stands that can be attached to the bottom edge of each light bar using an included Allen wrench and screw. After this quick installation, Hue Play can sit vertically beside your TV. The box also includes two different plastic stands that attach to the center back of each light bar, with an adhesive tape that attaches Hue Play to a smooth surface, namely the back of your TV. 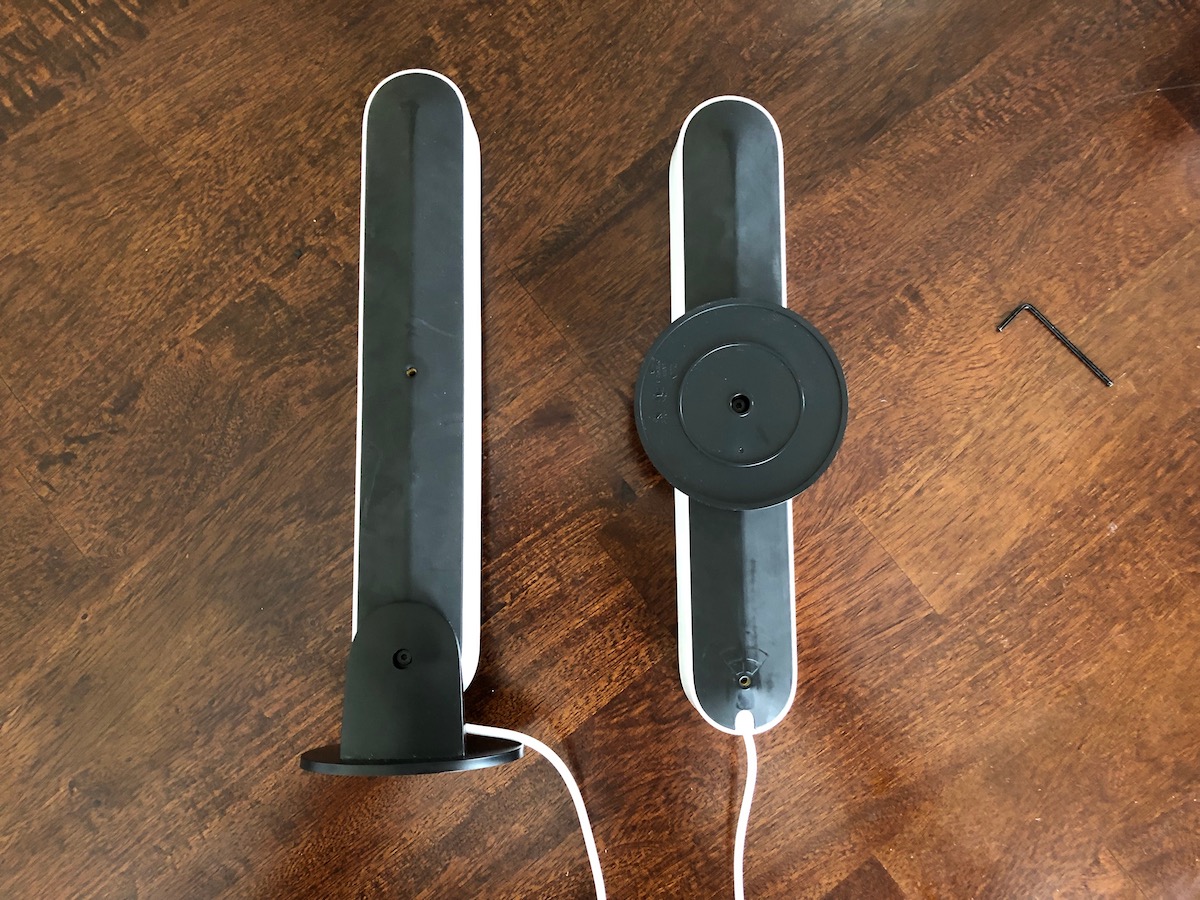 Once the light bars are installed, you can add them into your HomeKit setup using the Philips Hue iOS app. In the Hue app I searched for and added Hue Play into my apartment’s setup, renaming them and assigning them to the correct room. Once in Hue’s app new lights sync to Apple’s Home app, which is where I primarily interact with my Hue lightbulbs. It was just as easy to set up and add Hue Play into various scenes and automations in Home as it has been for all other Hue bulbs I’ve purchased.

Hue Play’s design makes it a unique addition to the Hue system, but my own particular entertainment setup never quite gelled with the introduction of Hue Play as a freestanding fixture. I had to make a few placement adjustments to use Hue Play on my main entertainment center (when it wasn’t attached to the back of my TV), which initially impeded my enjoyment of the lights. 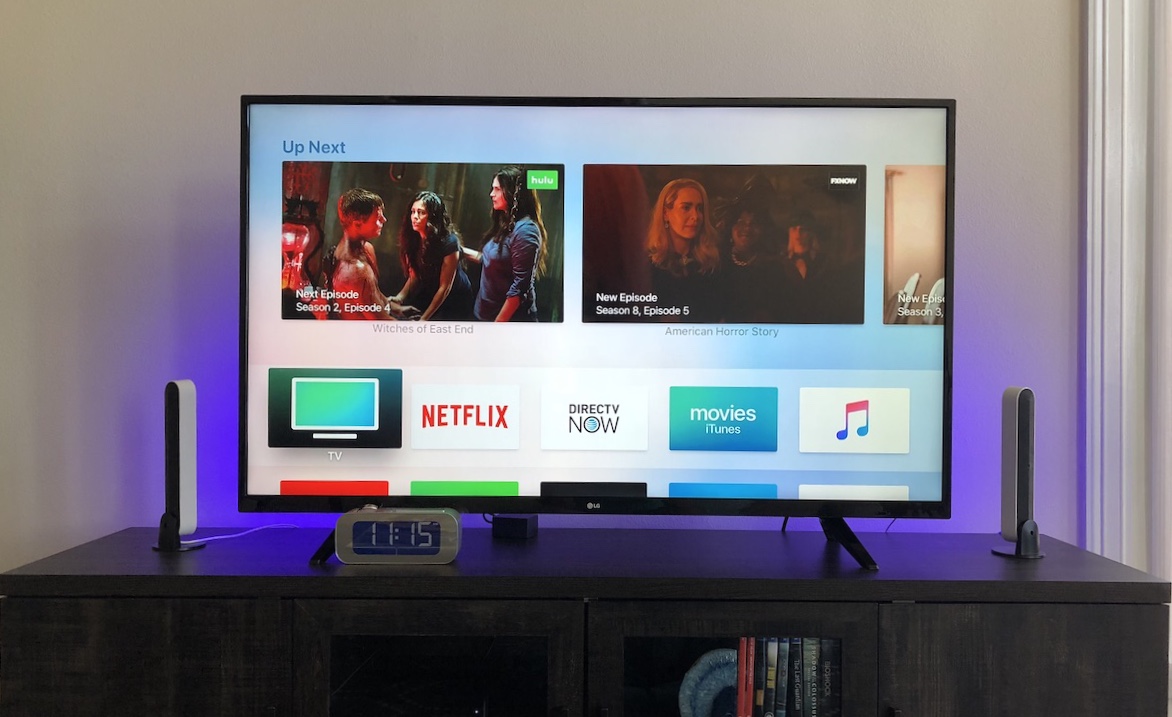 For entertainment systems with a bit more space, Hue Play should integrate pretty seamlessly. The unit is quite slim, measuring just under 10 inches long and 2 inches wide at the base. Hue Play is available in white and black as well, so it can blend into multiple design styles.

In my testing, I put one Hue Play light bar on each side of my living room TV in three configurations: vertical standing, horizontal, and attached to the back of the TV. For bias lighting, I already have one full-length Hue White and Color Ambiance Lightstrip on the back of my living room TV, so I had something to compare the Hue Play to, which you can see in images throughout this review. 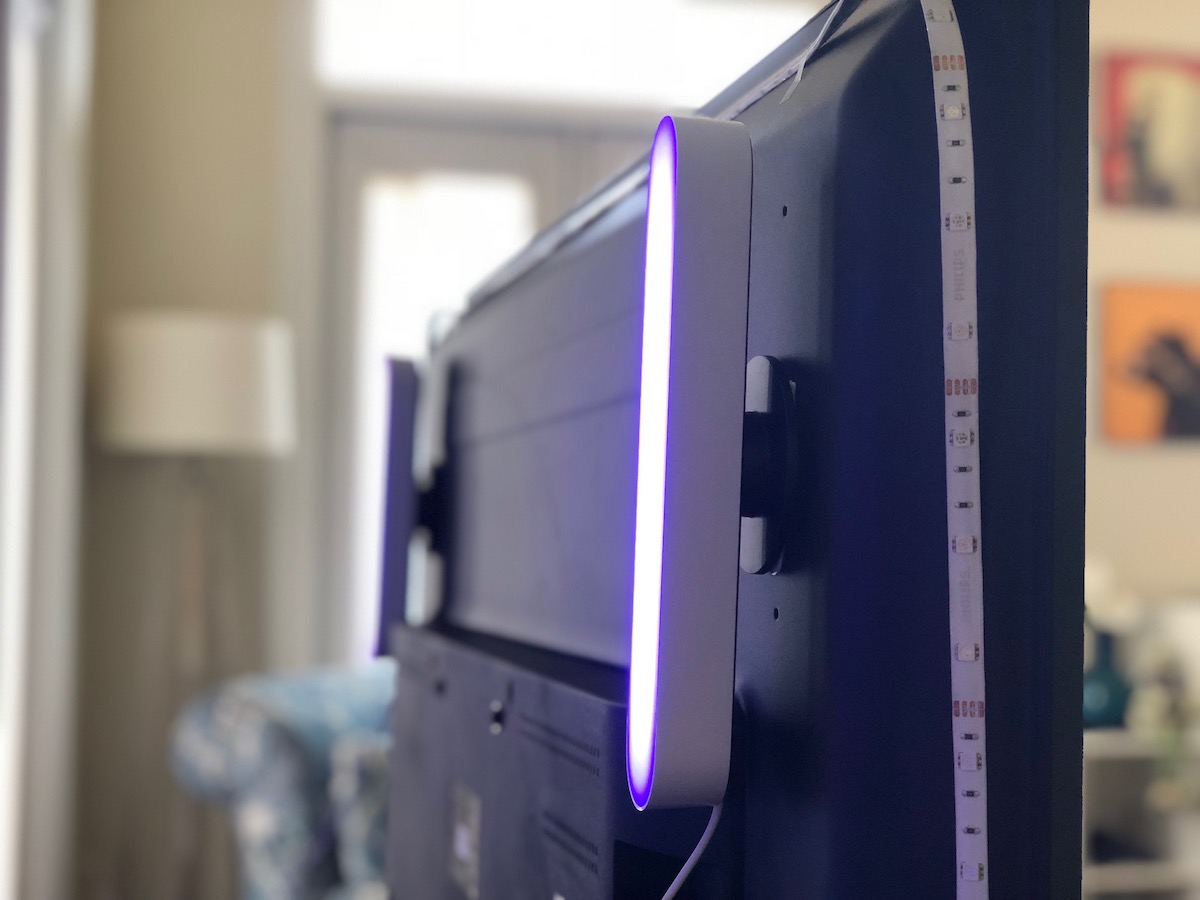 Attached to the back of a TV, Philips Hue’s marketing shows three Hue Play units providing full bias lighting, with one each on the right and left edges and one on top of the TV’s backside. With just two units to test, I still found that Hue Play’s bias lighting was as good as my six-foot Hue Lightstrip, and was even brighter in most situations. 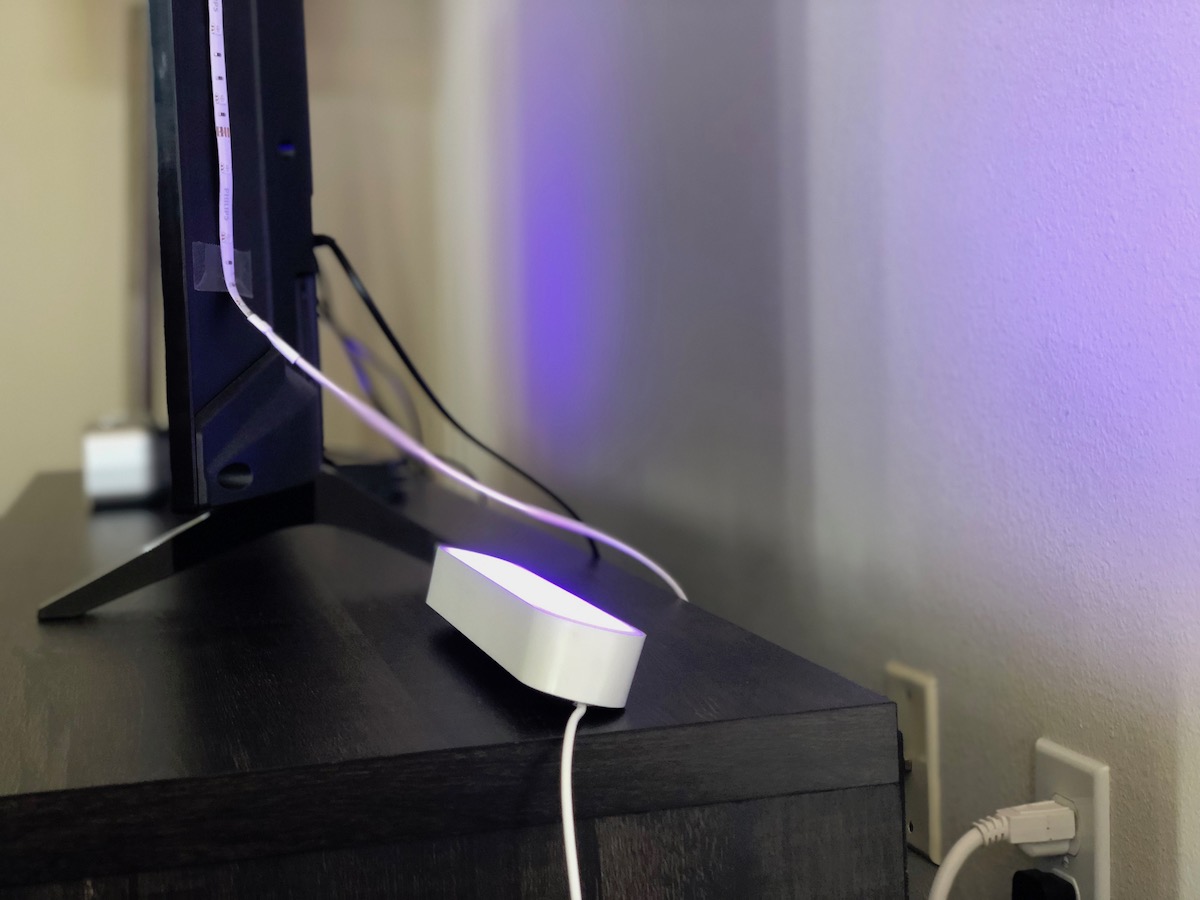 The other two configurations provided attractive bias lighting as well, and I particularly liked Hue Play when it was lying flat on my entertainment center. With some adjusting, I was able to hide Hue Play this way behind my PS4 Pro and a stack of books, further accentuating multiple objects near my TV and not just the set itself. When it was free standing vertically, Hue Play was just too much of a space hog for my personal setup, so it didn’t stay this way for long. 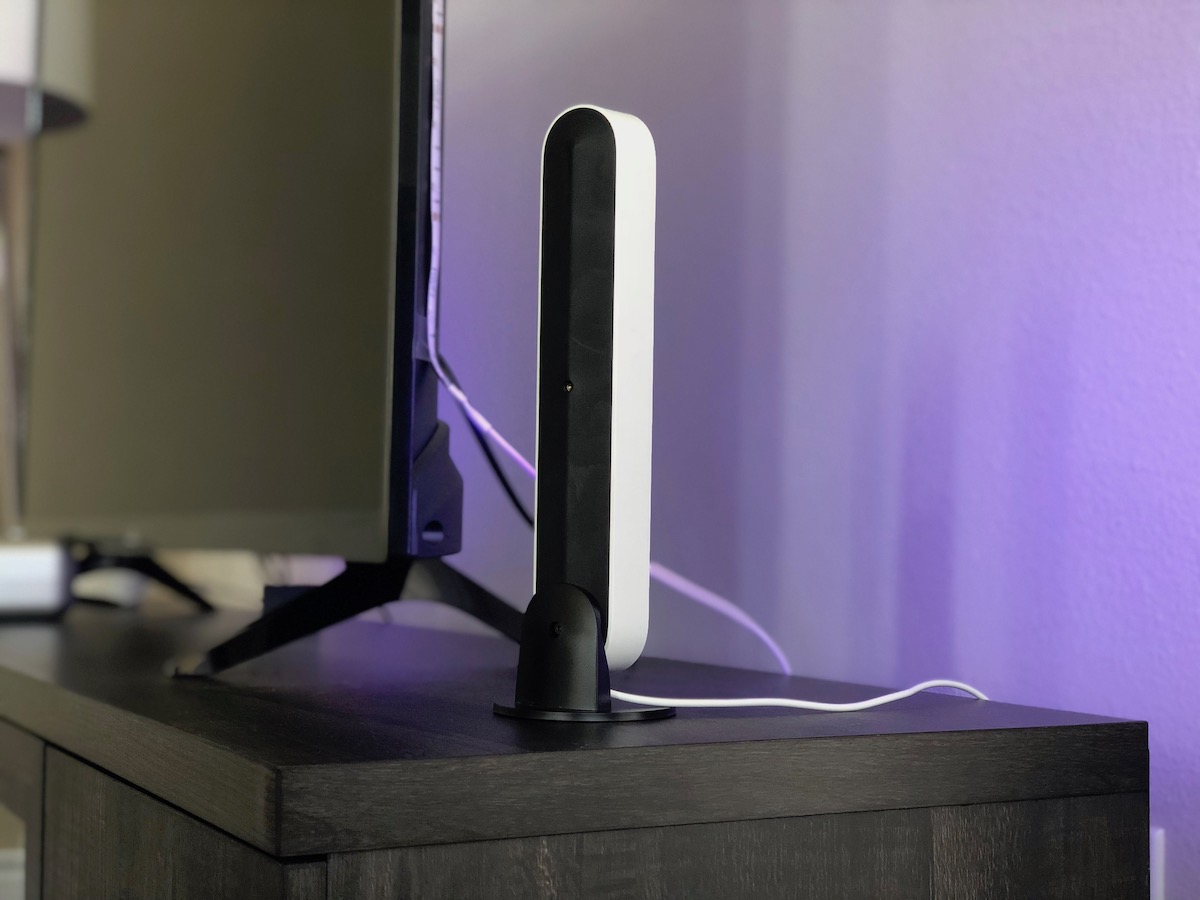 At night, the comparison between the two was a bit less evident. I never keep my Lightstrip at 100% brightness at night, usually opting for around 75%. I’ve found this to be the perfect bias lighting level for when I’m playing PS4 or watching a movie, and at this level the Lightstrip and Hue Play were essentially equals. The slight difference came in the exact shape of the light dispersion: Lightstrip is brightest atop my TV at night, while Hue Play (standing vertically) accentuated the right and left edges and was softer on the wall above the TV.

When Hue Play was attached to the back of my TV, two circular auras could be glimpsed on the wall behind the TV. Hue Play lying down horizontally was perhaps closest to the Hue Lightstrip’s light dispersion, with even light that swept up the entire wall instead of focusing on specific sections. Although I could see why someone might prefer one light pattern over another, I personally couldn’t find a positive or negative side to this aspect of Hue Play and Hue Lightstrip to a degree that one had a definite edge over the other.

As an example, here are a few comparison pictures between Hue Play and Hue Lightstrip in the evening and in full dark at nighttime (all images show each fixture at 100% brightness):

Hue Lightstrip (left) vs Hue Play (right, attached to back of TV)

The difference between the Hue Play and Lightstrip will really depend on your specific use case, and of course the price. If you simply want to add bias lighting to a TV without any visual light fixture, Hue Lightstrip is cheaper at $89.99 (and lower in sales). For $40 more, Hue Play doesn’t really have many advantages over the Lightstrip in this specific category, unless you are looking for visible light fixtures to add as accents to your entertainment setup, want a brighter and more focused light, and you have the room. 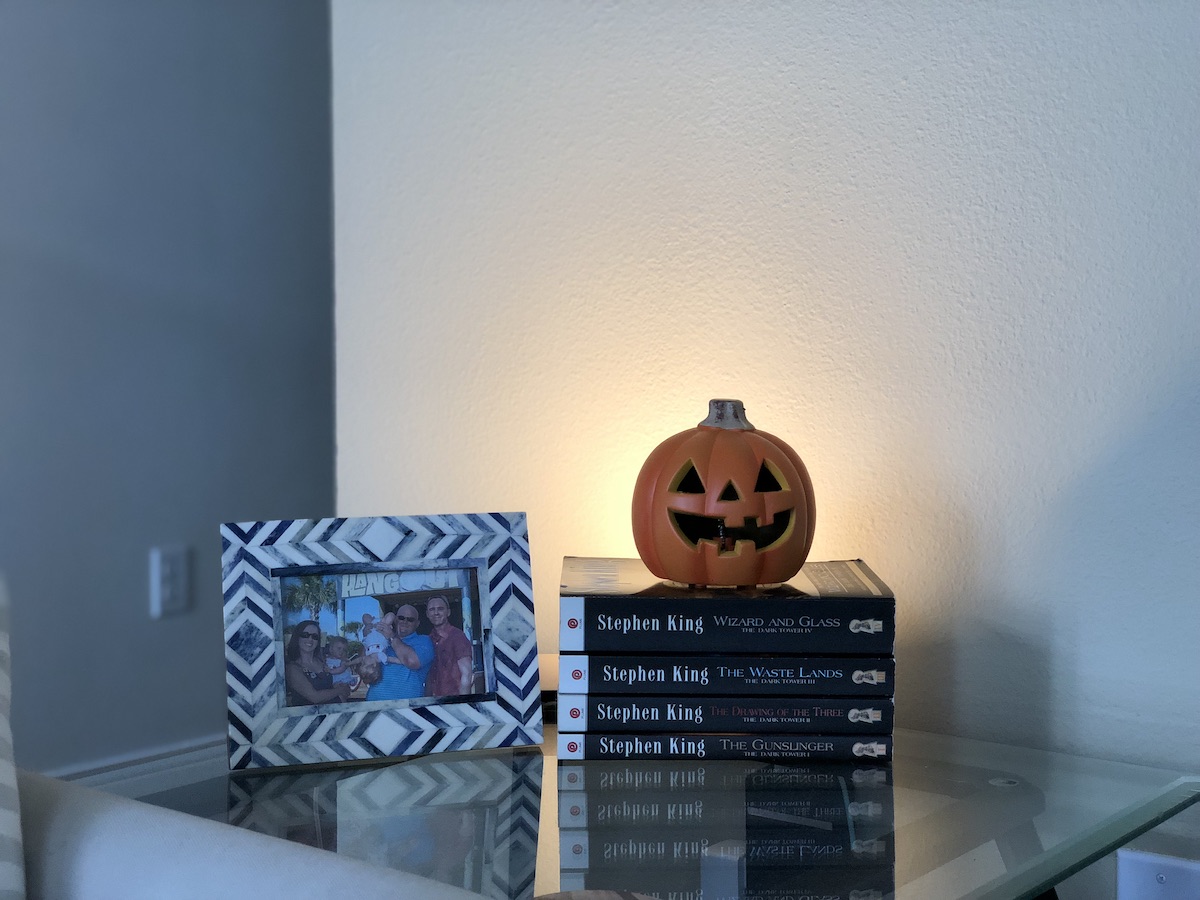 I also placed Hue Play behind a picture frame and stack of books on a table beside my couch, and hidden behind a cubed bookshelf, and I particularly liked these placements for the light bar. The 10-inch fixture is the perfect length for accent lighting in unique situations, where a full-length lightstrip would be too long. The included cord is also about six feet long, so you have some room for placement options as well.

The back of the Hue Play has a rubberized texture that’s slightly raised to a point in the middle, allowing the light bar to settle in a perfect angled position that throws light at the wall it’s facing, and slightly upward. This setup is aimed at customers who opt for a single Hue Play kit, which is sold for $69.99, but it should be noted that purchasing just one light bar will not provide bias lighting for an entire entertainment system that’s as good as two light bars or Hue Lightstrip.

Hue Play supports the company’s white and color ambiance features, meaning you can cycle through as many as 16 million colors to output from the light bars. I typically settled on a light blue hue and the dispersion of the light from each fixture looked good from all angles. While not quite bright enough to light up an entire room on their own, I could see a trio of 530 lumen Hue Play fixtures providing a surprising amount of light, particularly for small areas. 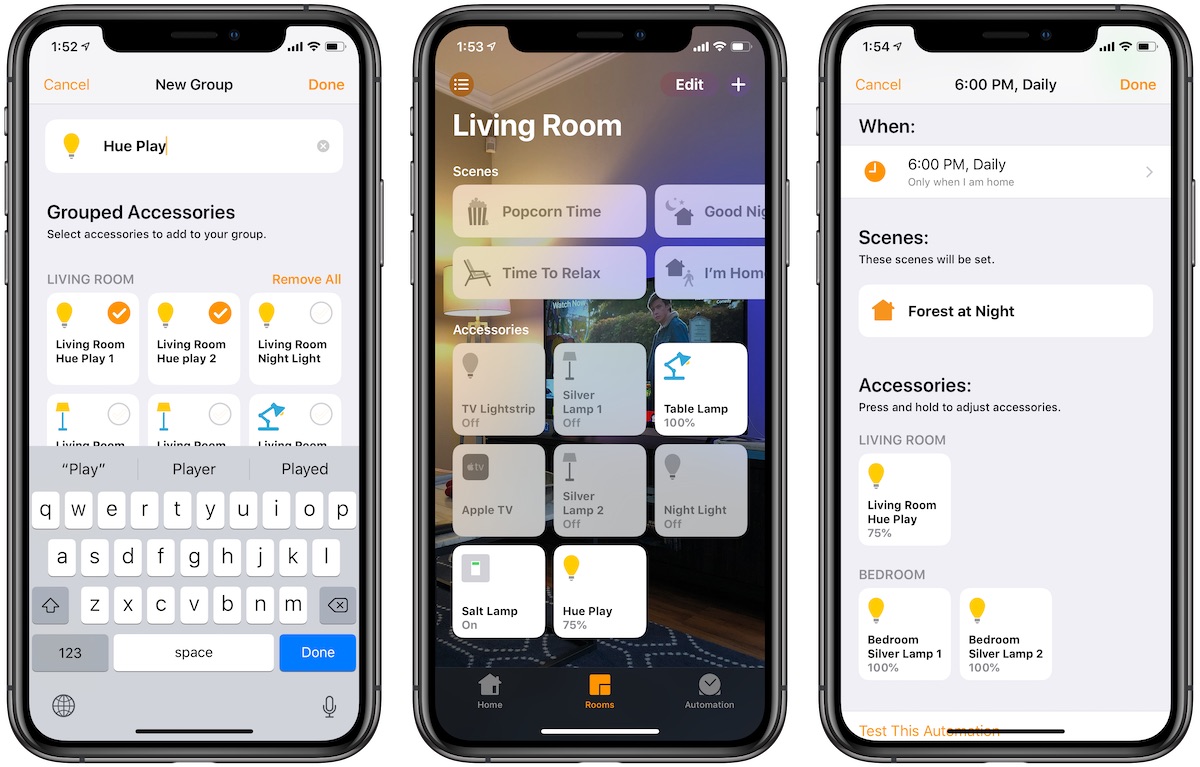 On the control side of things, Hue Play is controlled like any other of Hue’s HomeKit lighting accessories. You can use either the Hue or Home iOS app, or simply speak to Siri on any device that supports Apple’s digital assistant. I currently have eight scenes and 10 automations in my Home app, which I typically interact with using Siri on HomePod.

I added Hue Play into a few scenes, mostly those that automate in the nighttime. During my tests, I edited my “Popcorn Time” scene to use Hue Play instead of my Lightstrip, and I also activated them for my “Book Time” scene. I use a completely different lamp for reading, but I liked the added light ambiance Hue Play provided. I also combined the two Hue Play lamps into one HomeKit accessory, making them even easier to tap to turn on and off, or control their brightness and color output simultaneously. 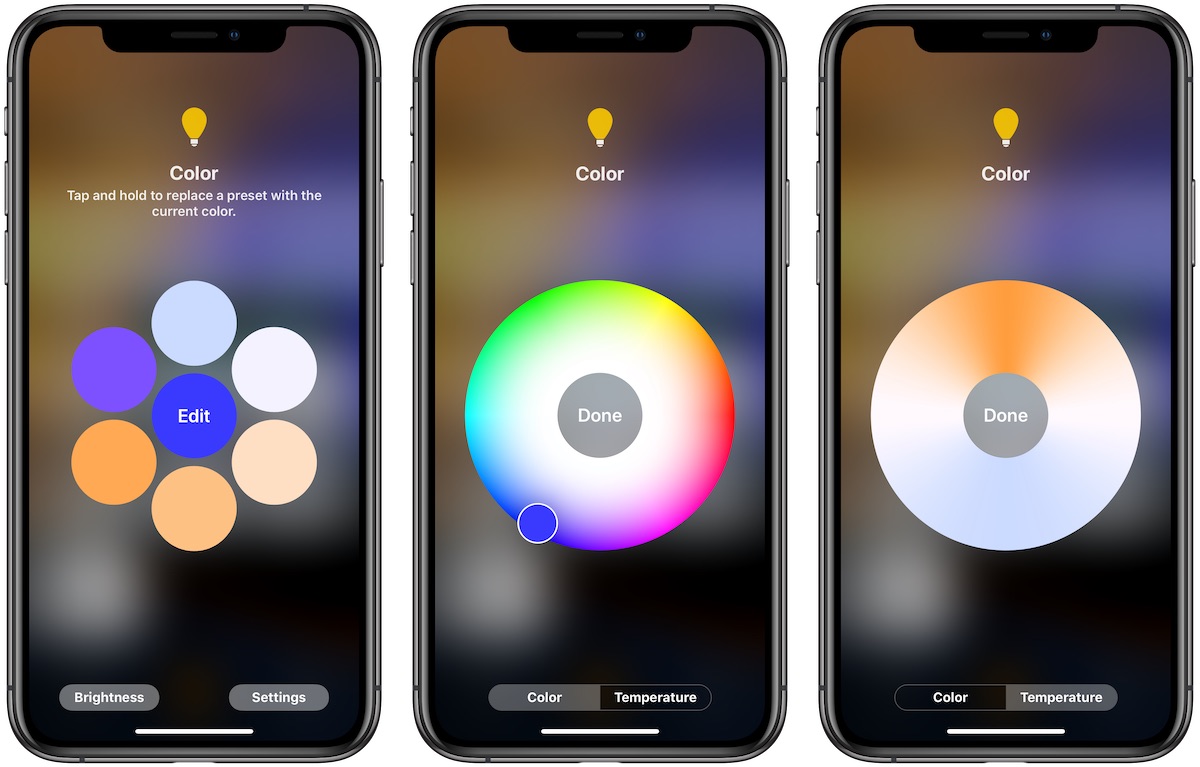 In all instances, Hue Play was easy to introduce into my existing HomeKit setup, it interacted well with other products, and performed consistently well for the past six weeks that I’ve been testing it daily. Of course, every now and then I came across a few “No Response” warnings on Hue Play in HomeKit, just like other Hue products. As usual, these glitches were usually fixed on their own and weren’t particularly pervasive in my daily use of the fixtures.

Hue Play is a solid and unique addition to Signify’s growing stable of Hue light fixtures, offering three diverse placement styles, colorful lighting recipes, bright lighting, and a sleek body that will fit in most entertainment center areas without much disruption. If you don’t have as much room, Hue Play can still provide quality bias lighting when attached to a TV set, but the cost doesn’t beat the comparatively cheaper and reliable Hue Lightstrip.

The Hue Play can be purchased on Meethue.com in a Single Pack ($69.99) and Double Pack ($129.99). Each of these kits come with the three-slot AC adapter so that you can expand your setup. To do so, Signify sells the Extension Pack ($59.99), which is just a Hue Play light, cable, and mounting options without the AC adapter.

Signify provided MacRumors with a Philips Hue Play Double Pack for this review. No other compensation was received

Tag: Philips Hue
Discuss this article in our forums