Oppo has had a very exciting year, releasing smartphones like the Oppo Find X and the Oppo F9, which offered innovative and unique features. Although we’re in the home stretch of 2018 smartphone releases, it doesn’t seem like the company is slowing down. Its latest release, the Oppo R17 Pro, comes equipped with two batteries, three cameras, an in-screen fingerprint sensor, and a host of other interesting features.

As exciting and futuristic as the phone sounds, how does it perform day to day? Find out in our Oppo R17 Pro review. 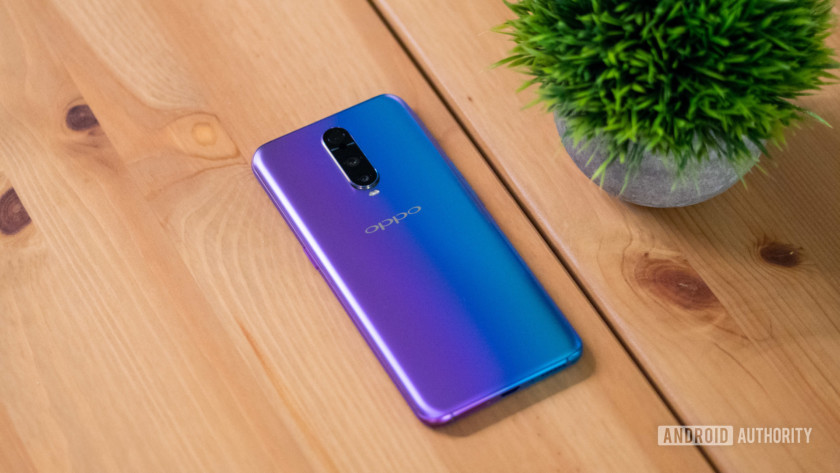 The Oppo R17 Pro is one of the most beautiful and elegant designs I’ve had the chance to lay my hands on all year.

Most smartphone designs this year have followed a very basic formula of metal and glass. The Oppo R17 Pro is no different, but it makes it exciting. The Oppo R17 Pro is one of the most beautiful and elegant designs I’ve had laid my hands on all year. The R17 Pro has a sleek design with tapered edges, rounded corners, with a metal and glass combination that exudes a high-quality feel. It’s dense but it doesn’t feel too heavy or too light. The perfect balance of weight and ergonomics make the R7 Pro extremely comfortable to hold. 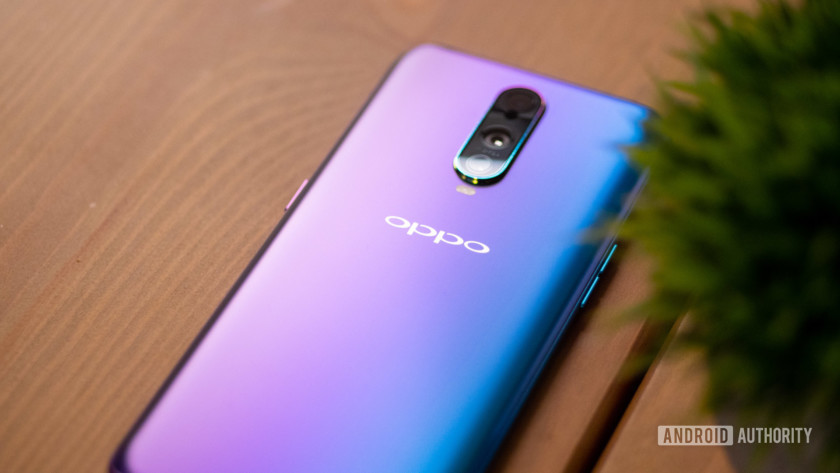 The most eye-catching part about the R17 Pro’s design is its new fog gradient color, which beautifully flows from purple to blue. This may remind you of the twilight color of the Huawei P20 Pro. Unlike the P20 Pro, the coating on the Oppo R17 Pro’s rear glass panel isn’t reflective. Instead, it has more of a satin appearance and looks less like glass. I like Oppo’s take on this gradient color scheme better. It hides fingerprints and smudges more effectively and blends in more seamlessly with the metal frame. The color will turn a lot of heads, and while it’s super photogenic, you have to see it in person to truly appreciate how incredible it looks. 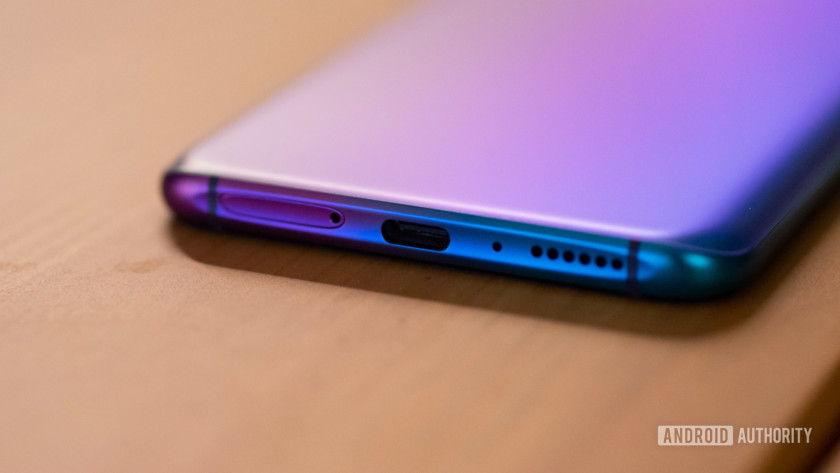 Going around the Oppo R17 Pro you’ll find the typical slew of buttons and ports in their usual places. The power button is comfortably placed on the right side with volume buttons on the opposing left side. The bottom houses a single speaker, microphone, USB Type-C port, and a dual sim card tray. The top of the phone has another microphone but otherwise is completely blank. Unfortunately, there is no headphone jack if you care about that sort of thing. 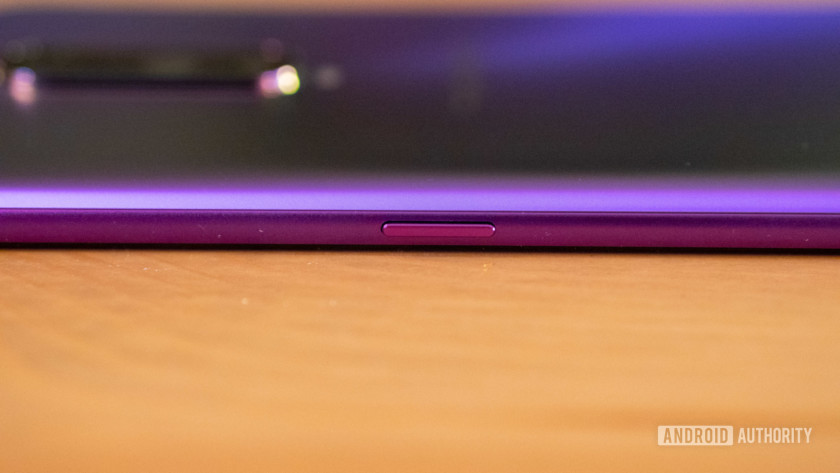 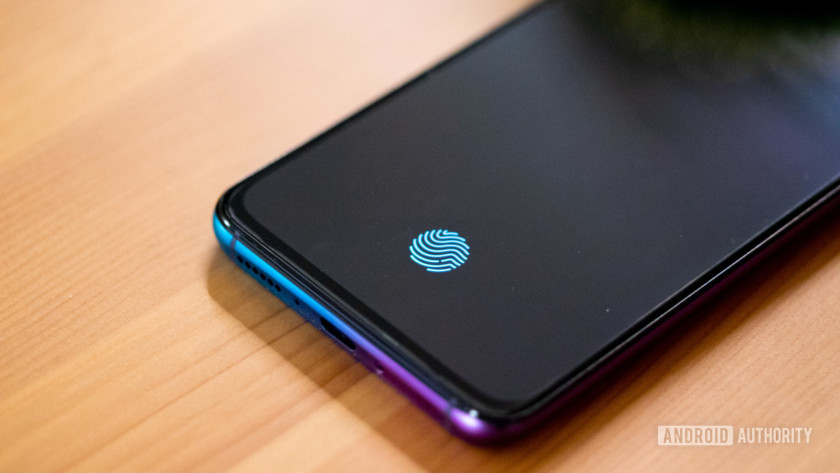 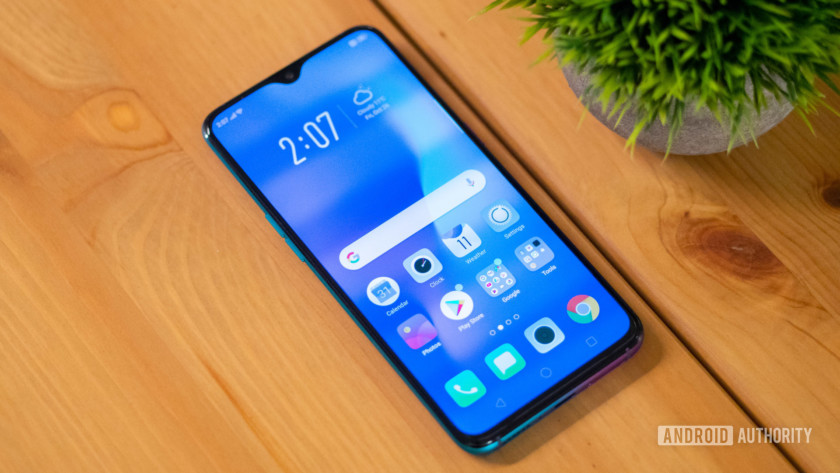 The display is surrounded by extremely thin bezels and has a very tiny notch giving it an impressive 91.5 percent screen-to-body ratio.

The Oppo R17 Pro has a large 6.4 inch AMOLED screen with 19.5:9 aspect ratio and 2,340 x 1,080 resolution. The screen looks fantastic, with the vibrant colors, great contrast, and inky deep blacks typical of AMOLED displays. The 1080p resolution is a step below QHD, but my eyes couldn’t tell the difference. It’s still plenty sharp, and text and graphics are crisp and comfortable to read. The display is surrounded by extremely thin bezels and there’s a very tiny notch, giving the phone an impressive 91.5 percent screen-to-body ratio. The notch on the Oppo R17 Pro is the same waterdrop design Oppo used on the F9 and F9 Pro, similar to the one on the Huawei Mate 20. The notch is this small because it only houses a camera — the proximity and light sensors are hidden underneath the display. There’s still an earpiece in the shape of a tiny slit on the outer bezel above the notch. Oppo’s ingenuity for creating such a small notch is impressive and something more manufacturers should pick up on. It’s more attractive and eats up a lot less screen. 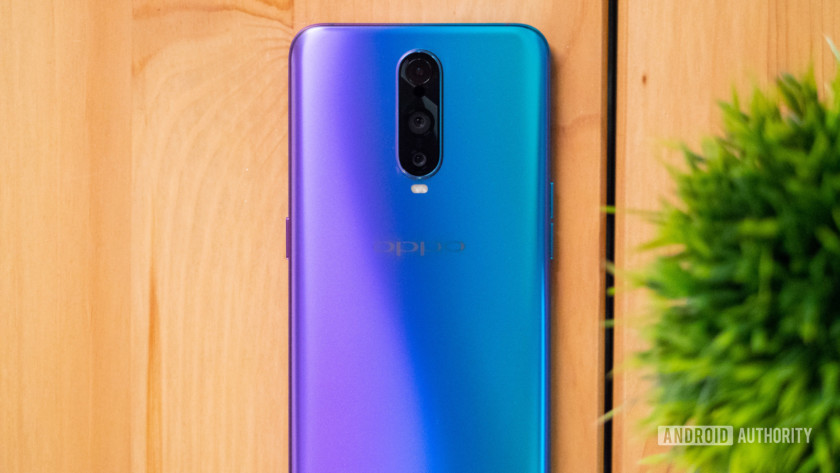 Inside the Oppo R17 Pro is a Snapdragon 710 processor, 8GB of RAM, 128GB of storage and an equivalent 3,700mAh battery. There’s no microSD card slot, but 128 gigabytes of internal storage should be more than enough for most consumers. The Snapdragon 710 puts the R17 Pro more in the midrange category, as it sits below Qualcomm’s more powerful Snapdragon 845, but above the 600 series Snapdragons.

The Oppo R17 Pro could be best described as a high-end mid-range smartphone and the specifications and benchmark scores certainly reflect that. In everyday use, the R17 Pro performs well. The device is very quick to launch applications and multitask, and it feels very smooth when navigating through the interface or scrolling through a webpage. The 8GB of RAM made for an excellent multitasking experience and the phone never came close to using up all the RAM. The total amount of RAM usage hovered around 4.5GB on average.

Batteries on smartphones usually aren’t that interesting to talk about but this one is due to the fact that there are two of them inside of the R17 Pro. The R17 Pro has two 1,850mAh batteries giving a grand total 3,700mAh. The purpose of the two batteries is to provide for faster charging than if the device only had one battery. The phone charges via SuperVOOC Flash Charge using the provided charger and according to Oppo, SuperVOOC can reach close to 50W of charging power, providing 40 percent battery in 10 minutes.

I tested this claim with the phone completely dead and sure enough, the phone was at 40 percent after 10 minutes. I took this a few steps further and after another 10 minutes of charging the R17 Pro reached 74 percent. At the 30 minute mark, the phone was almost fully charged at 96 percent. This was truly impressive. The phone also stays cool to the touch while charging as SuperVOOC keeps the heat in the charging brick instead of transferring it to the phone. Despite the glass back the Oppo R17 Pro does not have wireless charging but who needs wireless charging when you have charging speeds as fast as SuperVOOC. As for how long the phone lasted on a single charge, I was getting through a full day very comfortably. A full day’s worth of use for me typically consists of reading emails, social media, watching YouTube, playing games, and taking photos. I sometimes ended the day with around 50 percent left and on those days I did not charge the device until the following day. Oppo doesn’t make it easy to gauge battery life statistics but I estimate I got anywhere between 15 and 20 hours per charge. 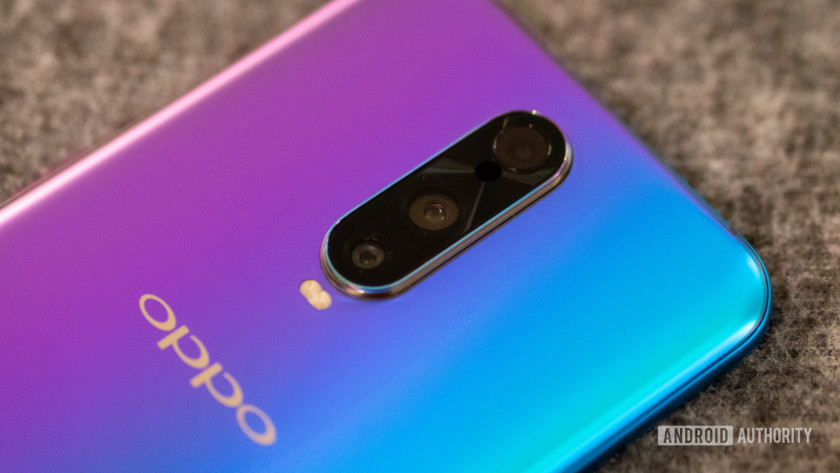 Triple cameras on smartphones are starting to crop up more and more and the Oppo R17 Pro is one of the few smartphones released this year with three cameras. The primary camera is a 12MP sensor with OIS and a variable aperture of f/1.5 and f/2.4 similar to Samsung Galaxy S9 or Galaxy Note 9. Unlike Samsung’s implementation which lets you control the aperture both automatically and manually, the Oppo R17 Pro decides automatically which aperture to use based on the lighting conditions, with no option to manually change the aperture. The third camera is probably the most unique of the bunch. It’s a TOF (Time of Flight) 3D stereo camera. The 3D camera allows you to capture 3D images in seconds by circling the camera around an object or person. It reminded me a lot of the 3D Creator from Sony Xperia devices. I didn’t find the 3D scanning particularly useful and on my review device, the feature was very buggy. The 3D feature often crashed the camera or froze during the scanning process and the majority of my 3D images did not come out perfectly. Here’s hoping a software update from Oppo will fix most of these issues.

The front-facing camera sounds equally as impressive with a whopping 25MP sensor, and selfie photos come out quite good with natural colors and skin tones. The results aren’t quite as sharp as what you might get from a phone such as the Google Pixel 3, but they’re more than adequate. 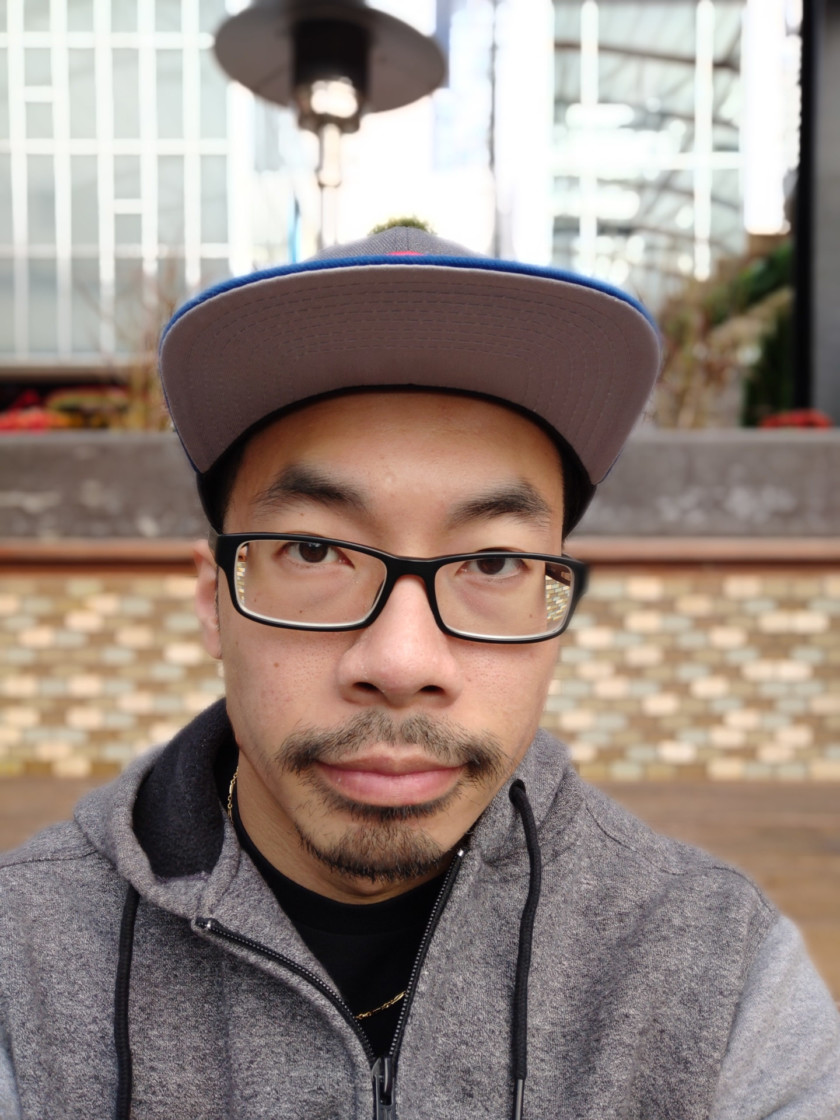 Similar to many other smartphone cameras on the market the Oppo R17 Pro comes with AI camera features. AI beauty mode is available on the front facing camera for hiding blemishes and softening details in faces. I’m usually not a fan of beauty modes, as they’re typically aggressive, but I didn’t mind it on the R17 Pro. The results were very subtle and selfies still looked natural with the mode enabled. The rear camera has AI scene recognition and can recognize 23 different scenes. After the camera recognizes the scene it will optimize the image based on what it sees to produce a better photo.

Night Sight it just one of the swanky new photography features packed into the new Google Pixel 3 and Pixel 3 XL. The mode promises super well-lit and detailed shots even in the most dimly …

Picture quality from the 12MP main camera has been great. Images are sharp and detailed, and color reproduction is vibrant without appearing unnatural. What I’ve been most impressed with is the Ultra Night Mode for low-light or night time photography. This will automatically kick in if the camera decides the situation is too dark, or you can toggle to it manually. You’ll get a visual cue on the screen when a night mode photo is being taken and it will require you to hold the phone steady for a couple of seconds while it works its magic. Ultra Night Mode significantly improves shadow and highlight detail and produces a brighter image. The differences with and without it are astounding. It oversharpens the images, making them look a little unnatural, but the overall results are still fantastic. 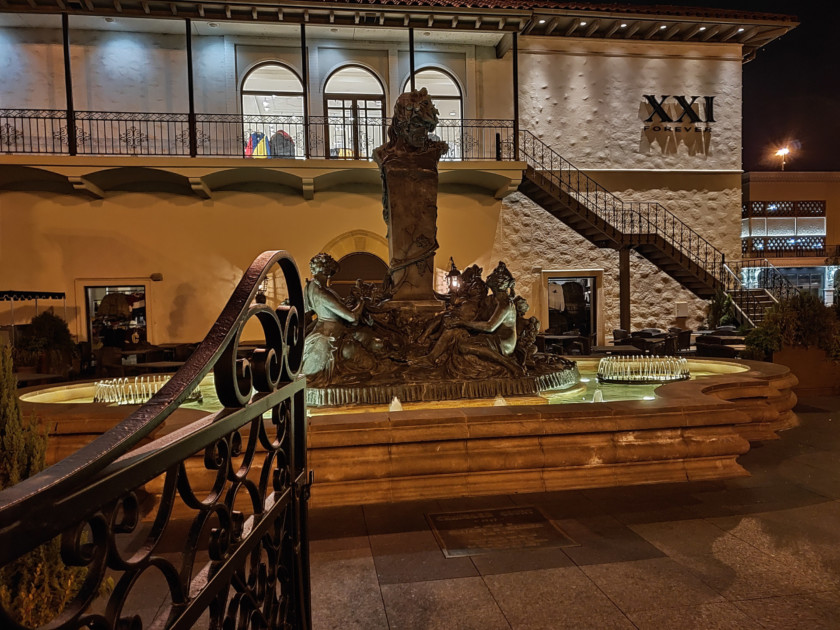 Check out the full gallery of camera samples below for easy viewing or click here for the full res images. The software is ColorOS version 5.2 on top of Android 8.1 Oreo. If you’ve used any recent Oppo device the software experience will feel very familiar. ColorOS has always been a little too bright, playful, and iOS-like for my taste, but it comes jam-packed with features. On your left-most home screen lives a smart assistant giving you quick access to specific functions and other glanceable information such as the weather, calendar, and step tracker.

The next major version of Android, Android 9.0 Pie, has already made its way to the Google Pixel, Pixel XL, Pixel 2, and Pixel 2 XL. Google announced this official Android 9.0 update on August …

The smart sidebar can also give you quick access to functions and apps by swiping in from the edge of the display similar to Samsung’s edge UX features. ColorOS supports many other smart features, such as smart driving and gesture controls for split-screen multitasking, taking a screenshot, and turning on the display.

Although the Oppo R17 Pro doesn’t come with Android 9.0 Pie, it still supports gesture-based navigation in place of the traditional on-screen navigation buttons. As to whether the R17 Pro will get updated to Android Pie remains to be seen. Hopefully Oppo does it sooner than later. The Oppo R17 Pro is priced at 4,299 Yuan (~$509). I wouldn’t expect an official U.S. release anytime soon, or even at all. The best alternative for U.S. residents is the OnePlus 6T, which offers almost identical hardware minus the extra camera and fancy fog gradient color. You may also prefer the software experience of the OnePlus 6T as it’s more like stock Android.

The Oppo R17 Pro has a lot of great things going for it. I like how Oppo keeps pushing boundaries with every smartphone release. The camera is great, the in-screen fingerprint sensor is fairly reliable, and SuperVOOC Flash Charge is wickedly fast. The phone is also quite attractive, especially with the fog gradient finish. If you can get your hands on one, it’s a phone worth considering.