OnePlus 6T vs. OnePlus 6: Should you upgrade?

OnePlus launches a new phone every six months, but with the company offering top-notch hardware on all of its devices, it doesn’t necessarily mean you have to upgrade with each cycle. Here’s what you need to know if you’re already rocking the OnePlus 6 and are eyeing the 6T as a potential upgrade.

The OnePlus 6T can be best summed up as a new variant of the OnePlus 6. Very little has changed on the hardware side of things, and while the phone has picked up a new cutout for the front camera, an in-display fingerprint sensor, and a 3700mAh battery, it’s missing the headphone jack.

You can hold on to your OnePlus 6 for at least one more generation. The phone is still one of the fastest in the market, and there’s nothing fundamentally new in the OnePlus 6T that warrants an upgrade. If anything, you’re better off with the OnePlus 6 if you care about wired audio.

OnePlus has followed a dual flagship release cadence for the last two years, and the strategy seems to be working for the company. As we’ve seen in years past, the fall refresh is more about tweaking a few elements rather than a wholesale overhaul, and that’s the case on the OnePlus 6T as well. With very little changing when it comes to the underlying hardware, let’s take a look if you should make the switch to OnePlus’ latest. 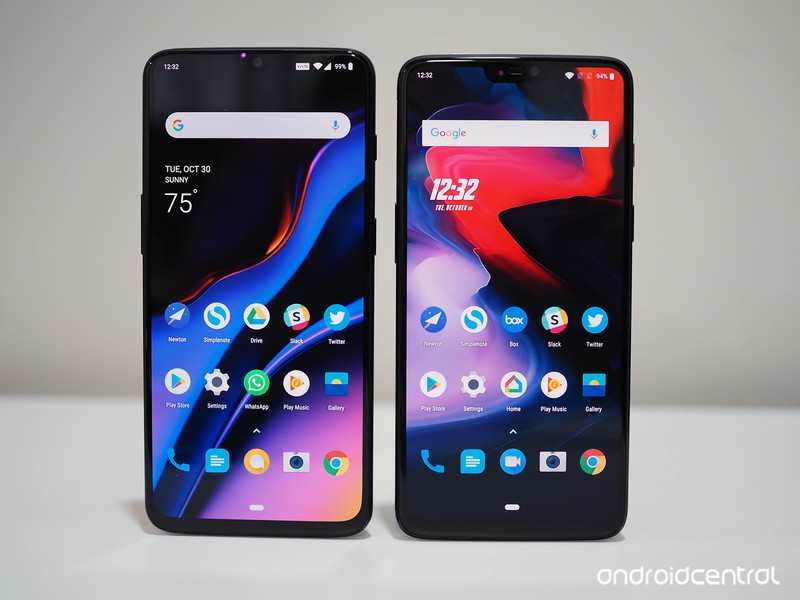 OnePlus doesn’t really change a lot of the hardware elements with the T refresh, and as such, the overall design aesthetic as well as the specs are identical between the OnePlus 6 and 6T. The main changes with the 6T center around the fact that it now has a narrower cutout at the top of the display, and the traditional fingerprint sensor has made way for an in-display solution.

The 6T also has a slightly larger 6.41-inch display (versus the 6.28 inches on the OnePlus 6), which leads to a taller profile. One thing that’s different though is the width of the phone — the 6T is 0.6mm narrower than its predecessor, and that makes a lot of difference in real-world usage. It is also heavier thanks to the larger 3700mAh battery, and that also contributes to giving the device an added sense of heft.

The narrower notch up top isn’t nearly as annoying, and it’s far easier to ignore. And while the in-display sensor presents a novel new way to unlock the phone, it isn’t as fast or reliable as the standard module it’s replacing. Authentication using the optical in-display module usually takes well over a second, and I’ve found that it was particularly bothersome to use when the device was laid flat on a table.

The sensor also failed to recognize my fingerprints on several occasions, and if you were looking at the feature as a possible reason to upgrade, I’d recommend holding off for a few generations. The tech is very cool, but the implementation just isn’t there yet. As an alternative, face unlock on the 6T is just as accurate as the OnePlus 6, and continues to be one of the fastest in general on Android today.

The in-display sensor is very cool, but it just isn’t as fast as traditional fingerprint readers.

Aside from that, there isn’t much to differentiate the 6T from its predecessor. Both phones are powered by the Snapdragon 845 and come with 6GB or 8GB of RAM, and feature Wi-Fi ac, Bluetooth 5.0, AptX HD, and dual rear cameras. OnePlus is offering 128GB of storage as standard on the 6T, which more than negates the $20 price hike to $549.

The 6T also has Gorilla Glass 6 protection at the front and back, and I (thankfully) haven’t had a chance to test out its real-world effectiveness yet. But the Gorilla Glass 5 back on the OnePlus 6 weathered a few tumbles over the last five months without any issues, so I’m hopeful that the new version will be just as resilient.

One point of contention for fans of wired audio is the fact that the 6T no longer has a 3.5mm jack. It was an odd move for the company to make, but the industry in general is moving away from wired audio and OnePlus is the latest company to follow that trend.

OnePlus phones were never short on performance, and with both the 6 and 6T running the Snapdragon 845, you can be assured that there won’t be any slowdowns in day-to-day use. OnePlus is also taking advantage of the generous amount of RAM with a new feature called smart boost that caches data from frequently-used apps within the RAM to boost app load times. The feature is designed to help load games like PUBG faster, with OnePlus noting that it worked with a lot of app developers to optimize loading times on the 6T.

The overall software experience on both phones is near-identical, as is the performance.

For now, smart boost is limited to the 6T, but it should be making its way to other OnePlus phones shortly. Another area where things are identical between both phones is the software. With the OnePlus 6 picking up the Pie update, both devices are running the latest version of Android. OxygenOS continues to offer one of the best third-party software experiences on Android, and that hasn’t changed with the Pie update.

With the 6T sporting the same cameras as the 6, there isn’t any difference in this area as well. That said, OnePlus introduced a Nightscape mode on the 6T that staks several images to produce a more vivid image in low-light shooting scenarios.

Overall, the OnePlus 6T doesn’t offer anything drastically new that warrants an upgrade from the OnePlus 6. The in-display tech is still in its infancy and will take a few generations to get the same speed and accuracy as traditional fingerprint readers, and while the cutout is much smaller, that alone doesn’t justify paying for what is basically the same hardware. The OnePlus 6 is still one of the most capable phones in this segment, and the fact that it has a 3.5mm jack makes it the default choice for those interested in wired audio.

With the OnePlus 6T, you get a much more palatable notch at the top of the display and an in-display fingerprint sensor, a first for the company. That said, the underlying hardware is identical to its predecessor, and there really isn’t a need to upgrade.

Still one of the fastest phones in the market today.

The OnePlus 6 has plenty of juice left, and with the phone debuting just five months ago, it has the latest hardware in the market today. Combine that with the fact that it has received the Pie update and the 3.5mm jack and you get a device that should hold its own well into 2019.