Apple on Tuesday will take the stage at the Brooklyn Academy of Music, where it is widely expected to unveil the next-generation iPad Pro with Face ID and updates to a wide range of Macs, including the MacBook, iMac, and Mac mini.

Ahead of the keynote, which starts at 10:00 a.m. Eastern Time, Hungarian industrial design student Viktor Kadar has created concepts that imagine a new Mac mini paired with a new Apple Display and a Magic Keyboard with a Touch Bar.

Before anyone gets too excited: it’s unclear what the new Mac mini will look like, a new Apple Display isn’t coming until 2019, and there haven’t been any recent rumors to suggest Apple plans to add a Touch Bar to the Magic Keyboard. But who doesn’t love some sleek mockups to hype up tomorrow’s Apple Event?

The new Mac mini as Kadar imagines it would feature a Space Gray finish with the addition of four Thunderbolt 3 ports, while the new Apple Display would be similar to Apple’s discontinued Thunderbolt Display, but with slimmer bezels. 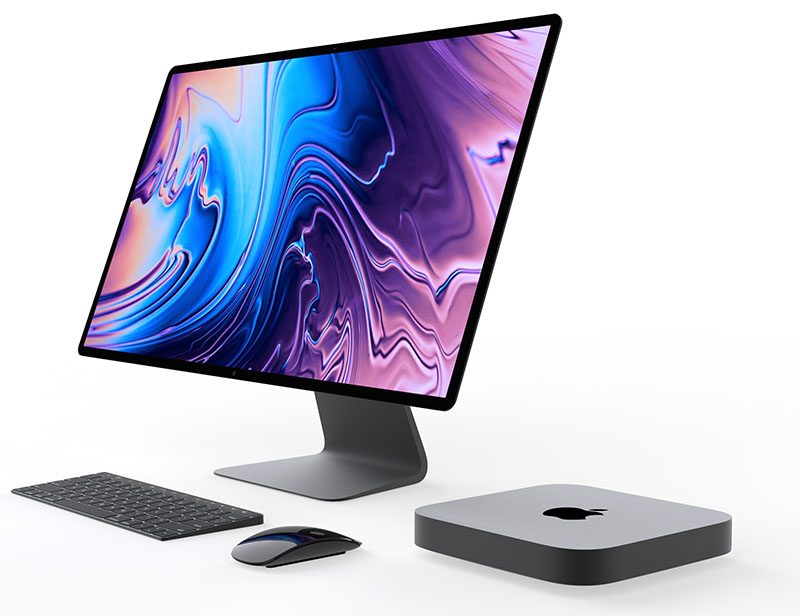 Kadar shared the concepts with Hungarian blog iMagazin and later with MacRumors.

Two reliable Apple scoopsters in Ming-Chi Kuo and Mark Gurman both expect the new Mac mini to feature upgraded processor options, while Gurman added that the portable desktop computer will gain new professional-focused features. Neither source has revealed details about its design or other tech specs.

Way back in April 2017, the blog Pike’s Universum said that a new high-end Mac mini would be released with a design that “won’t be so mini anymore,” suggesting the most expensive configuration might have a larger or taller design to accommodate for upgraded tech specs. The blog has a hit-and-miss track record.

We do know Apple is working on a new professional display to complement a new Mac Pro. Apple made the rare move of confirming both products will be released in 2019, as part of its reassured commitment to professional users. Apple could surprise us with a sneak peek of those products tomorrow, but we haven’t heard anything.

In any way, we’ll find out tomorrow. MacRumors will be live on location at Apple’s event inside the Brooklyn Academy of Music, with coverage on MacRumors.com and through @MacRumorsLive on Twitter.

Related: here’s a look back on the history of Mac mini: https://t.co/VCQig8dodu