The problem with making laptops is keeping them fresh and competitive each year is more than a little difficult. The 2-in-1 design changed the landscape, but manufacturers still need to come up with new ways to entice customers into purchasing their latest products.

Google also helped change the landscape with the introduction of Chrome OS, promising fast performance for affordable prices with the platform’s lightweight design. The education sector ate them up, and now they’ve become popular alternatives to Windows- and macOS-based PCs.

With its new Chromebook C330, Lenovo combines both worlds at a highly affordable price: A Chrome OS-based 2-in-1 converts into laptop, stand, tent and tablet modes. It’s not exactly the largest Chromebook around, but it’s compact, and you can easily slip it into a book bag or briefcase.

For this Lenovo Chromebook C330 review, Lenovo provided us with the 81HY blizzard white model, which has a maximum 64GB of storage (the cheaper model has 32GB), 4GB of LPDDR3 memory clocked at 1,866MHz (four slots), an 11.6-inch screen, and a four-core MediaTek processor. It has a starting price of $279 and hits stores on October 21.

It all starts with the display

The Lenovo Chromebook C330 sports an 11.6-inch IPS LCD screen supporting 10-point touch input, deep rich colors and wide viewing angles. The 1,366 x 768 screen is unsurprising given the Chromebook’s price, but it also provides a 60Hz refresh rate, which is decent for running video at a smooth 60fps. The IPS panel lives up to its promise, with vivid, bright colors at any angle and no visual wash out when your melon changes position.

By comparison, Google’s Pixelbook released in early 2018 sports a slightly larger 12.3-inch screen and an impressive 2,400 x 1,600 resolution, packing 235ppi versus Lenovo’s Chromebook with 160ppi. The Pixelbook is the “luxury model” of Chromebook, with a starting price of $999 although Lenovo’s highly affordable C330 does an excellent job bringing a “luxury” feel to a sub-$300 device. 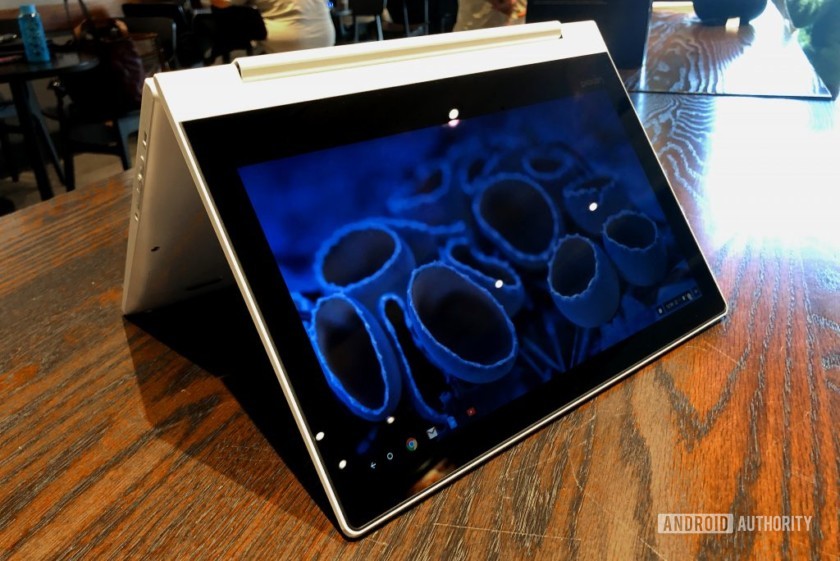 The big tease with Lenovo’s current design is the actual color scheme. When you open the lid, you’re presented with a mostly black screen and don’t really see the huge bezels on each side until you light up the display. The top and side bezels are around 0.75 inches wide, while the bottom black bezel measures an inch tall. The remaining portion of the lid is white and measures an additional inch to accommodate the 360-degree hinge. The well-hidden 720p webcam (0.9MP, fixed focus) resides in the top bezel. 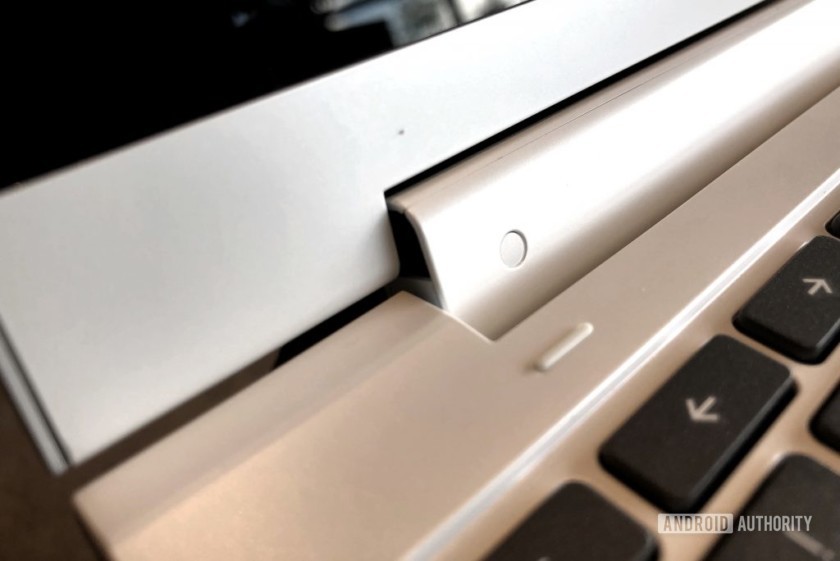 Moving down into the main keyboard area, you’ll see noticeable gaps between the screen, the bulky hinge, and the base. That’s the trade-off of having a 360-degree hinge, but it makes the Chromebook usable in four positions: laptop, tent, stand and tablet modes. These gaps are likely more apparent due to the review unit’s blizzard white exterior, though in comparison there aren’t gaps like that in Google’s Pixelbook. 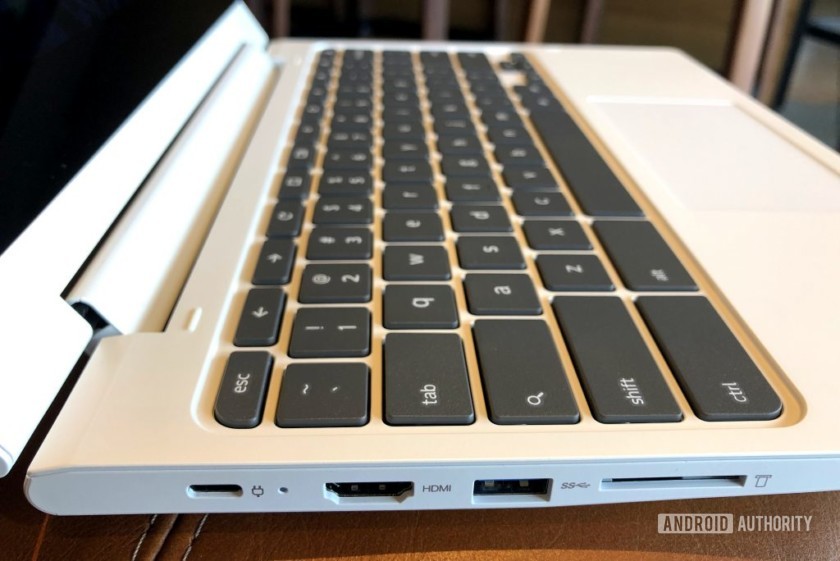 The left side houses one USB Type-C port (5Gbps), one HDMI port, one USB-A port (5Gbps) and a full-size SD card slot. The right side plays host to an audio combo jack, the volume buttons and the power button. The Chromebook doesn’t include an Ethernet port for wired networking, but it has Wireless AC and Bluetooth connectivity. There aren’t any visible vents for heat dissipation. 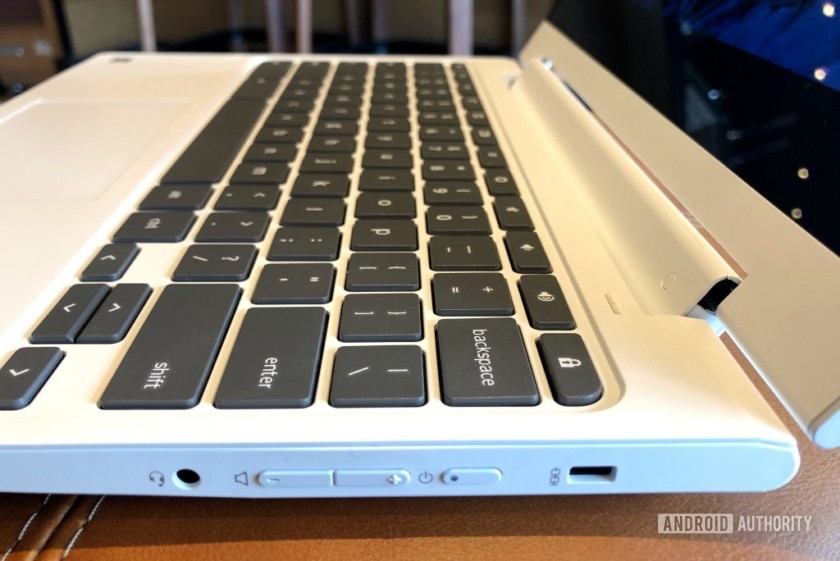 Unfortunately, the Chromebook’s two speakers are mounted on the bottom, pushing sound down and away from your ears. When it’s on a table, the audio sounds muffled and singular (non-stereo). Your best option here on an audible level is to view media in tent or stand mode so the speakers are pointing in your direction. 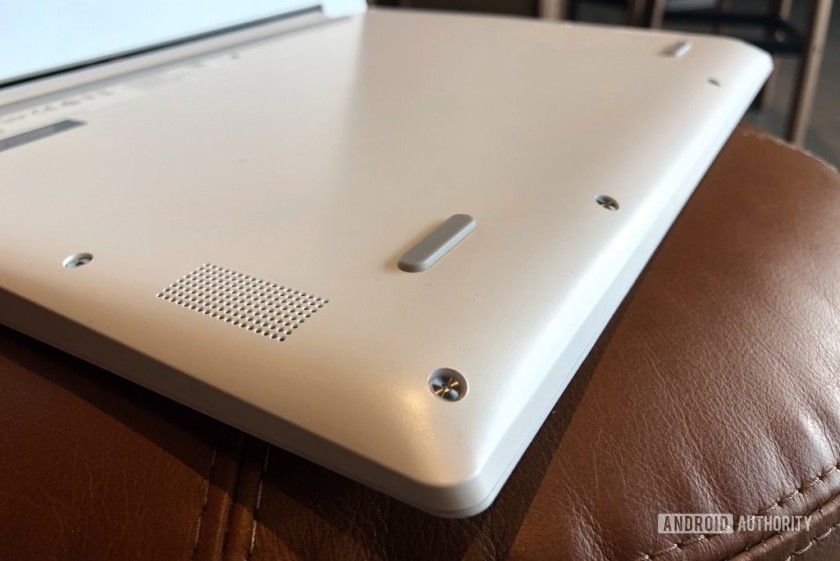 Overall, the Lenovo Chromebook C330 is quite attractive — it’s almost cute. The edges are crisp and somewhat angled, with a slight edge around the dark display area — at least with the blizzard white model. It’s slightly thicker in the front than the back although the specifications list a measurement of 11.5 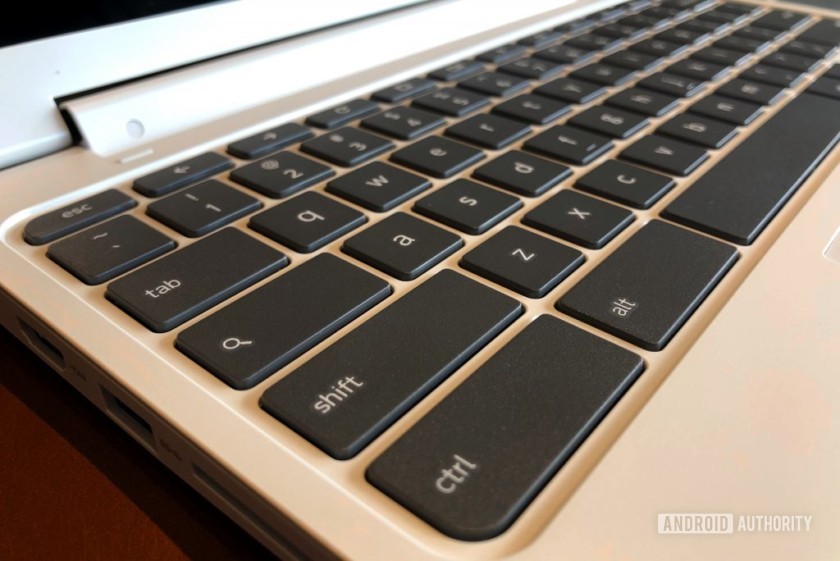 Complementing a great screen is a decent keyboard. There’s no number pad or backlighting, the latter of which is unfortunate given backlit keys are becoming more of a standard. The keys are extremely large and responsive, colored dark grey with white lettering. The keys are also highly responsive and bouncy, providing a great input experience. Media keys like brightness control, audio control, and more sit along the top. 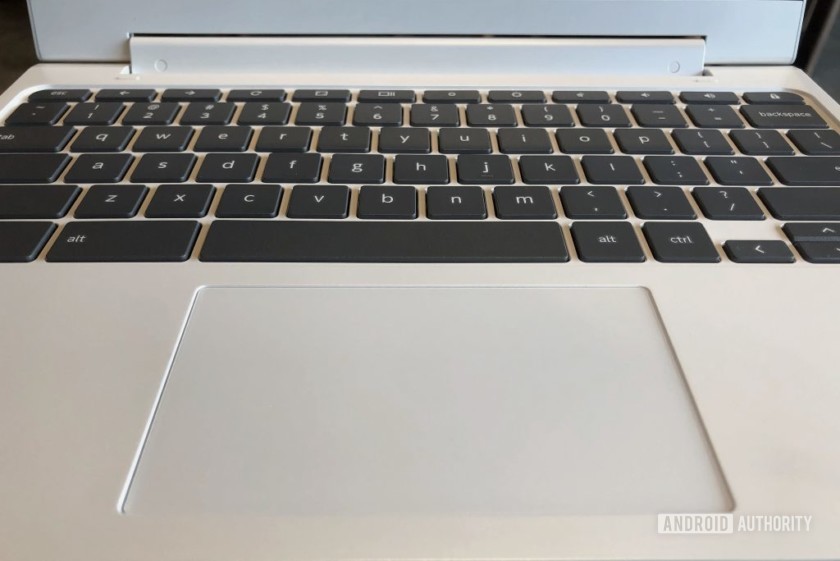 Below the keyboard is a large trackpad with a matte white finish, blending into the cool blizzard white theme. Despite its appearance, the trackpad is smooth to the touch and highly responsive, tracking our finger better than the trackpad I use on the latest MacBook Air. The trackpad measures just over four inches wide and provides a nice “click” tactile feedback when pressed. 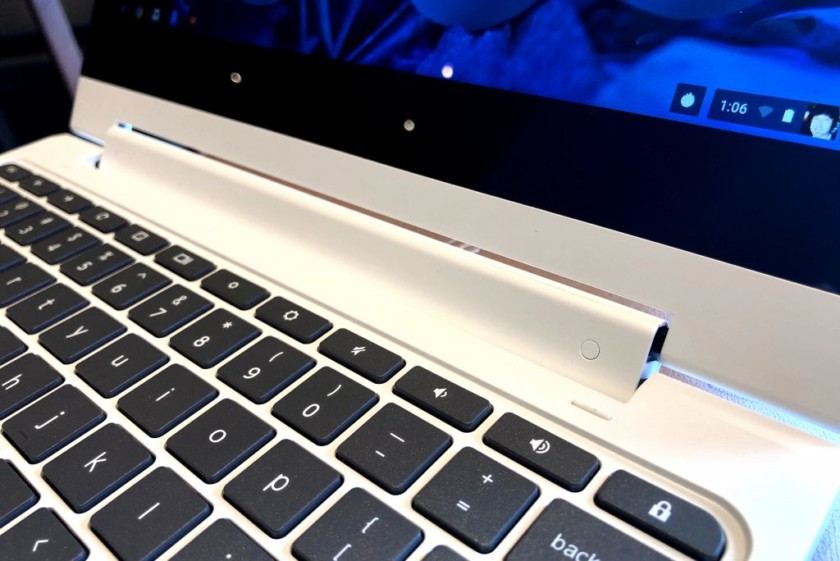 Powering the Lenovo is a MediaTek MT8173c four-core processor, featuring two “big” cores running at 2.11GHz and two “little” cores running at 1.7GHz. This chip has slightly higher speeds than the vanilla MT8173 model for tablets, hence the added “c” for Chromebooks in the label. Using Geekbench, the chip scored a 1457 in the single-core test and a 2984 score in the multi-core test.

MediaTek’s chip falls just behind the Qualcomm Snapdragon 820 used in the Samsung Galaxy S7 smartphone. In the Chromebook space, Lenovo’s C330 out-performs the Rockchip RK3399 used in the Asus Chromebook Flip C101PA and falls behind the Intel Pentium N4200 processor installed in the Acer Chromebook 15 released in late 2017.

It is not a powerhouse, but it doesn’t need to be.

Numbers aside, Lenovo’s Chromebook simply feels super zippy. The Chrome browser opened near-instantaneous, and Order and Chaos 2 took five seconds to reach the in-game connection screen. Google Sheets loaded in five seconds too — partly due to our wireless connection — while the Play Games app took around three seconds to fully load. Benchmark numbers are great when comparing Chromebook to Chromebook, but Lenovo’s model shows you don’t need a crazy beefy processor to get the job done.

Part of the overall speed relies on the integrated storage, as PCMark’s benchmark showed an average read speed of 2,339MB per second and an average write speed of a mere 64MB per second. At the time of this review, we did not have any information about the storage capacity limit of the Chromebook’s built-in SD card reader. 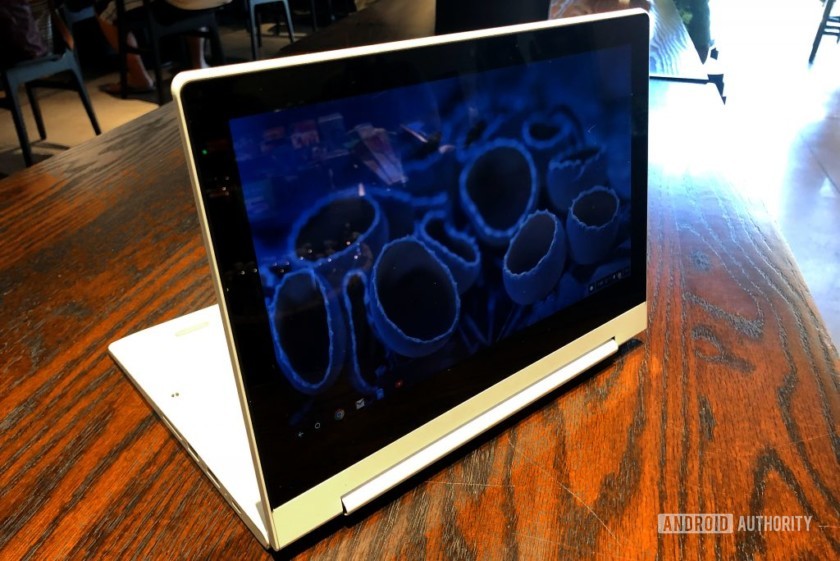 The Chromebook’s graphics are integrated into MediaTek’s processor — there’s no discrete GPU here. Given this model supports Google Play and Android apps, we can see the device’s potential using a variety of benchmarks including 3DMark, AnTuTu, PCMark for Android and GFXBench GL.

First, let’s start with GFXBench GL Benchmark. In the Aztec Ruins High Tier benchmark at 720p, the Chromebook averaged a mere 6.4fps, falling behind devices like Nvidia’s Shield tablet and the Samsung Galaxy S7 phone in performance. The Manhattan benchmark produced the highest frame rate, with an average of 24fps at 720p, yet it wasn’t enough to come even close to the results seen with the HP Chromebook 11 G5, the Asus Chromebook C202SA or the Acer Chromebook 11 (N3060).

A gaming machine it’s not, but considering it runs Chrome OS – we aren’t really surprised

Keep in mind that Lenovo’s Chromebook has a maximum 1,366 x 768 resolution running at 60Hz. If you’re playing a 1080p video in full-screen mode, you typically won’t see any issues regarding choppiness. The opening cinematic for Titan Quest performed really well in full-screen mode, but the game itself wouldn’t play correctly in this mode. In fact, it would only run correctly in a window one-quarter the size of the Chromebook’s screen. The framerate was decent but not the smooth 60FPS the display’s refresh rate supports.

We can likely blame Titan Quest’s issues on a lack of optimization. We didn’t see any similar problems with Gameloft’s MMORPG Order and Chaos 2, as the game ran without major issues in full-screen mode using the default settings. Typical grind-based gameplay produced decent framerates although we saw tons of choppiness when large special effects consumed the screen. The framerate noticeably dropped and felt sluggish/jerky when we installed the optional HD graphics.

If you don’t plan to game on Lenovo’s Chromebook, you’ll have no worries about graphics. It’s capable of decent gameplay, but don’t expect stellar performance. Lenovo’s Chromebook appears best suited for games with simpler visuals, like the web-based Legends series by Spacetime Studios. 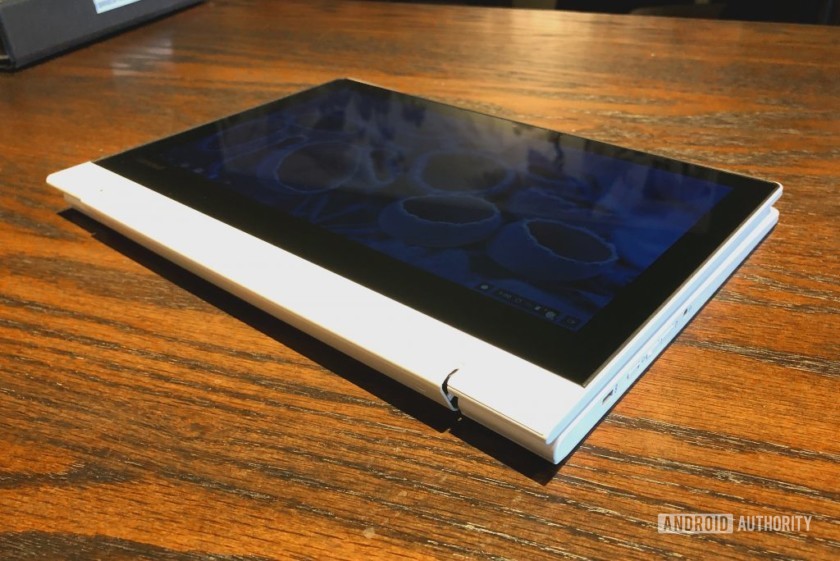 Lenovo’s Chromebook features a three-cell 1,000mAh battery promising up to 10 hours of typical use (although Chrome OS reports 13 hours). Because battery testing and reporting is typically measured using a specific screen brightness level, we instead ran tests 100 percent and 50 percent brightness.

For the first test, PCMark performed a variety of methods to drain the battery. At a screen brightness of 100 percent, the battery lasted seven hours and 20 minutes. With the screen set at a 50 percent brightness level, the battery endured for nine hours and nine minutes.

The battery can easily last a whole work day, and then some. 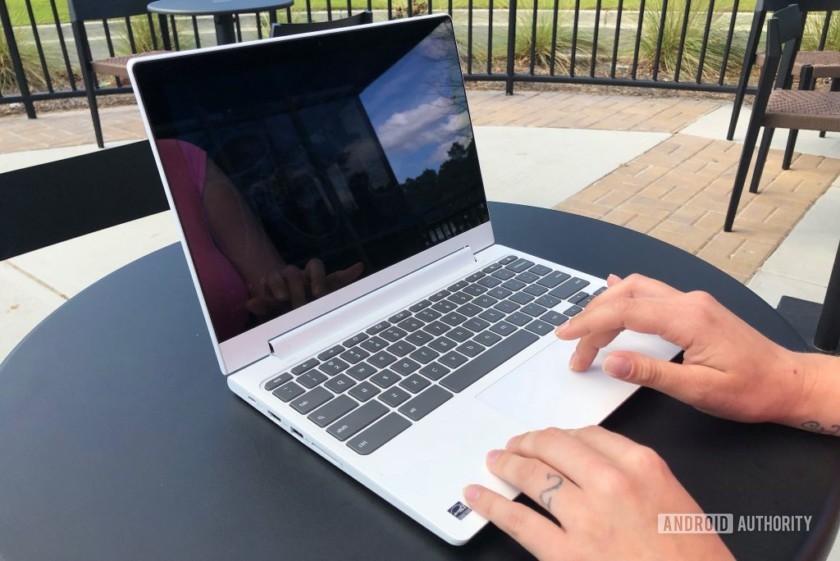 Lenovo’s Chromebook really shows how lightweight Google’s operating system is. It comes with the standard taskbar along the bottom with a battery meter, Wi-Fi icon, system clock and so on. The launcher button on the far left pulls up a search bar with five recently-used apps that expands into an Android-like app drawer. If you’re not familiar with Chrome OS, it’s designed to run web-based apps so there’s nothing to install, requiring very little overall storage.

This Chromebook supports Google Play and Android-based apps, which you do need to download and install. The 32GB and 64GB storage options help here, but if you’re downloading large Android apps, you may find yourself utilizing the SD card reader. Not all Android apps will run perfectly on Chrome OS as we experienced with Titan Quest, but that may or may not have anything to do with Google’s current Android support in Chrome OS.

Finally, given the roots of Chrome OS, you won’t find any unnecessary bloatware installed on this device. In fact, if you’re moving from an older Chromebook, Google takes the Android approach and stores your software configuration in the cloud, so setup won’t take much work. When you sign in, all your apps will even re-download.

A decent Chromebook at a great price 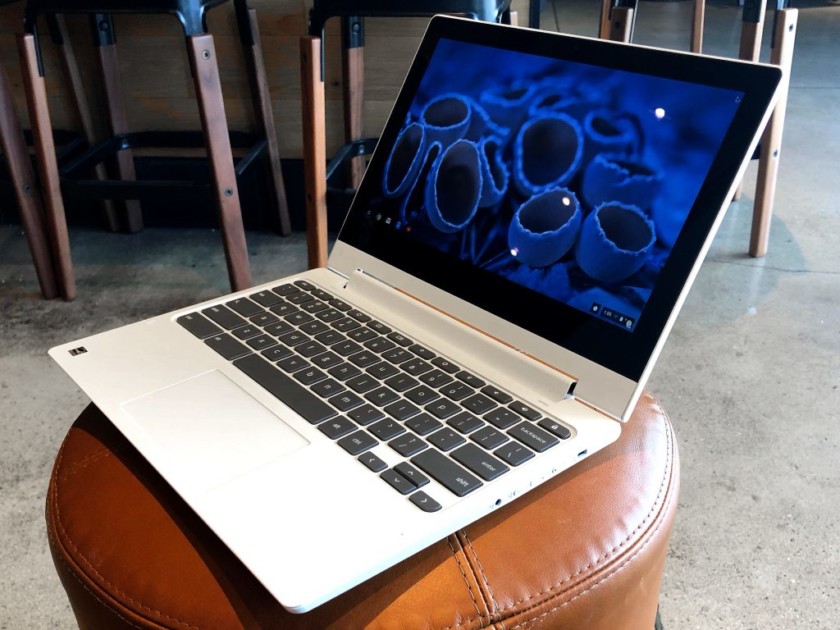 $279 is crazy cheap for a 2-in-1 device, but Lenovo’s Chromebook C330 doesn’t feel like a cheap device. Its solid, lightweight build oozes craftsmanship and style. The blizzard white color scheme is definitely attractive, though the white exterior highlights its biggest visual design flaws: The wide gaps between the screen, the hinge, and the base.

On a feature level, you have plenty of connectivity options for the office, home, or school. While there’s no stylus support or an included peripheral, the tablet mode and 10-point touch input offer something many Chromebooks simply lack. Despite its size and lightweight, this Chromebook doesn’t feel small.

It performs well in general, though we’ve seen better. It’s zippy enough to get the job done. Running Android applications — especially games — through Google Play can be a hit or miss. If you’re streaming or playing a 1080p video locally from the machine, you shouldn’t experience any major issues.

If you’re looking for a sub-13-inch 2-in-1 device not tied to Microsoft or Apple for less than $300, you can’t beat this Chromebook. It’s great if you want more than a tablet to surf the internet, work, stream videos, or simply be creative. Lenovo’s Chromebook C330 should serve as a great computing solution for students too.