The Asus Zenfone 5Q was originally introduced at Mobile World Congress 2018, as part of the company’s Zenfone 5 series. It’s not the flagship model out of the bunch – that honor goes to the Asus Zenfone 5Z – but at $300, the Zenfone 5Q is significantly cheaper and still boasts the same beautiful design.

Of course, there are compromises to account for the $200 price difference — the camera is mediocre, and this phone most likely won’t receive the latest version of Android. While it has impressive battery life and a vibrant display, we’re not convinced the features on the Zenfone 5Q justify the price tag.

Our favorite part of the Zenfone 5Q is its design — for a budget device, the smartphone looks more expensive than $300. With rather slim bezels and a glass body, it not only looks incredibly sleek but feels nice too. In fact, we didn’t mind swapping our iPhone XS to tote around the Zenfone 5Q when it comes to aesthetics. While our review unit is listed as “Midnight Black,” it looks more like a dark navy blue at first glance, especially when the light hits it.

At the top are two front-facing cameras, with an LED light and speaker sandwiched in between. A volume rocker is situated on the right side, with the power button underneath it. On the left is where you’ll find the dual SIM tray. 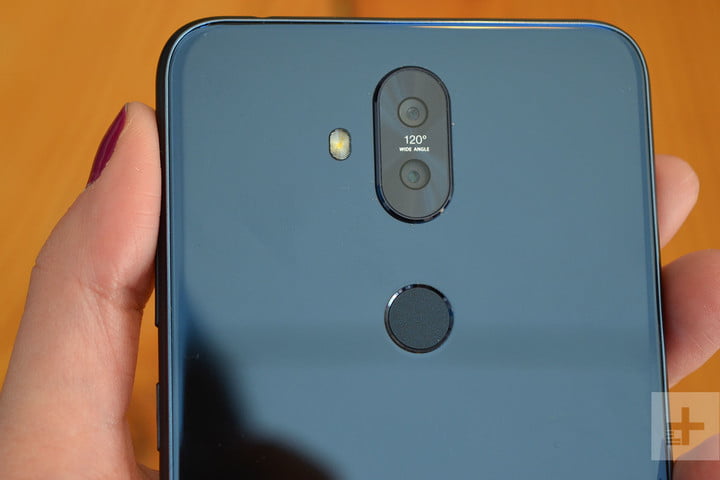 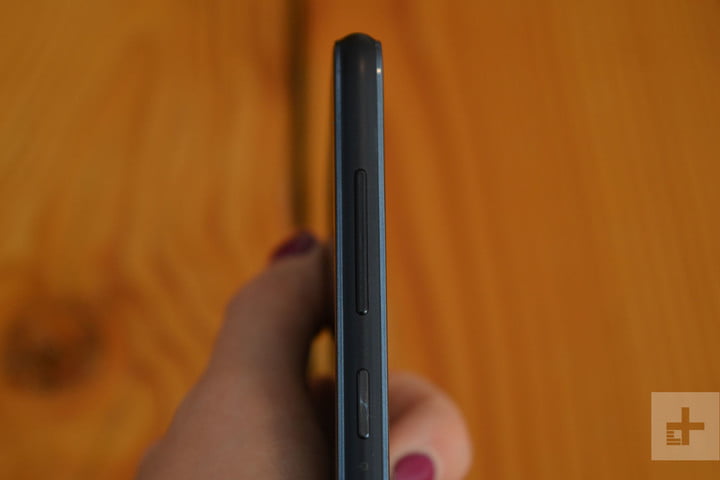 A feature that’s becoming more and more uncommon is the headphone jack, which the Zenfone 5Q houses at the top of the device. At the bottom, there’s unfortunately a Micro USB charging port instead of USB-C — which is more universal and convenient when it comes to charging. This is also where you’ll find the single speaker.

When it comes to sound quality, the Zenfone 5Q gets loud enough to hear both indoors and out and the quality is fairly decent. But we can’t ignore how muffled it sounds at loud volumes — while it’s not terrible, we’d advise a Bluetooth speaker if you want to crank the volume up.

The smartphone looks more expensive than $300.

While the phone is large in size, the rounded edges help with grip and it’s slim and lightweight enough that it’s comfortable to hold. On the back, there’s a stacked dual-lens camera module at the top that’s slightly raised — and the flash sits right next to it. Below it is an indented fingerprint sensor with the ASUS logo at the bottom of the device.

We do wish the fingerprint sensor was placed a bit lower than the spot it’s currently in, but it’s still comfortable to access and use. It’s also extremely responsive, but we relied more on face unlock, which worked quickly in most settings. 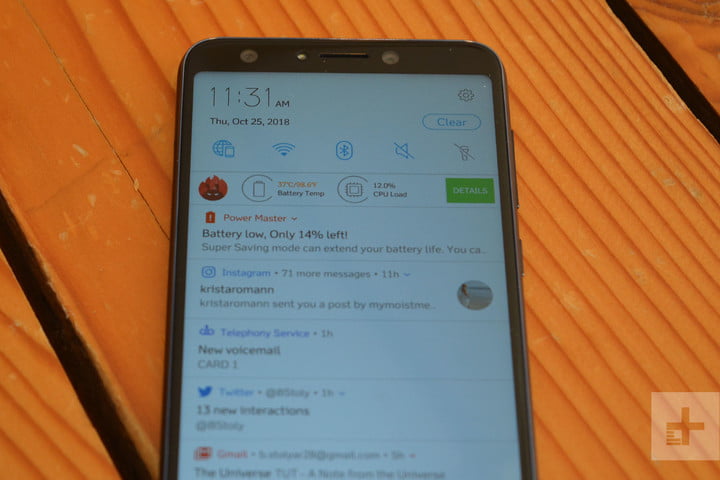 The 6-inch LCD display on the front has a 18:19 aspect ratio and 2,160 x 1,080-pixel resolution. We love how vibrant and bright content looks on the screen. With such a large and stunning display, we particularly enjoyed watching Netflix on it — the high resolution made the video quality look sharp and we didn’t run into any issues.

Outdoors we didn’t have trouble viewing anything on the display and didn’t have to tinker with brightness the way we’ve had to with other smartphones in the past. However, taking photos was a different matter and we found it was tough to see exactly what we were pointing the camera at even in broad daylight.

When it comes to durability, there’s no IP rating for the Zenfone 5Q so you won’t want to jump in the pool with it. We haven’t dropped the phone yet either, but with a glass back we definitely recommend grabbing a case for it. It made us a bit nervous to text one-handed, afraid that a drop without a case would completely shatter the glass.

The Asus Zenfone 5Q is powered by Qualcomm’s Snapdragon 630, which was released last year. We found that apps opened quickly and there was no stutter or lag when scrolling in apps like Twitter, Facebook, or Instagram. It also comes with 4GB of RAM and 64GB of storage — and if that’s not enough, there’s a MicroSD card slot that supports up to 2TB.

When it comes to gaming, we didn’t run into any issues playing The Sims Mobile. Content looked great on the large display and the graphics ran smoothly. Here are the benchmark results:

The Zenfone 5Q offers more powerful performance than competitors like the Honor 7X (which had an AnTuTu score of 63,311), but it didn’t beat out the Nokia 6.1 or Moto G6 Plus — which had scores of 88,595 and 90,483, respectively. While the Nokia 6.1 is cheaper by $30, the Moto G6 Plus has the highest score of all the phones mentioned and only costs $50 more than the Zenfone 5Q.

With the Zenfone 5Q, Asus takes pride in the four cameras featured on the smartphone. On the back is a dual camera — the primary sensor comes in at 16-megapixels with an f/2.2 aperture, while the secondary sensor features a 120-degree wide-angle lens. Meanwhile, the front facing camera also has a dual-lens setup — its primary sensor is 20-megapixels with an f/2.0 aperture and there’s a 120-degree wide-angle lens. 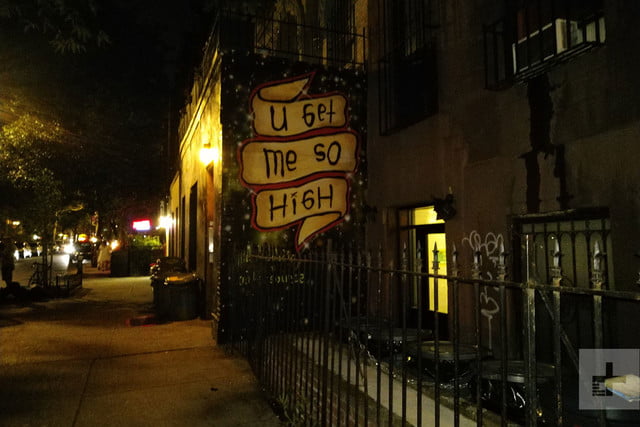 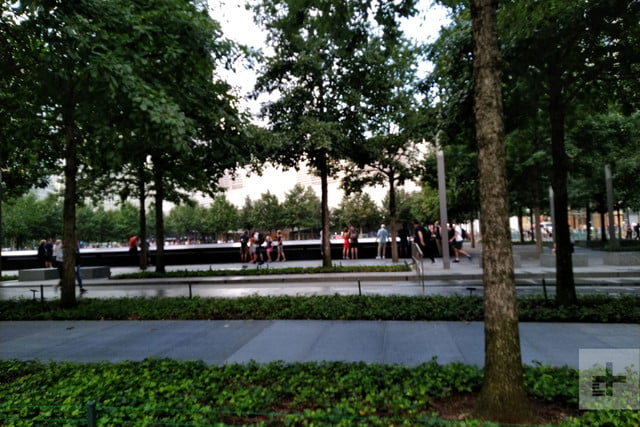 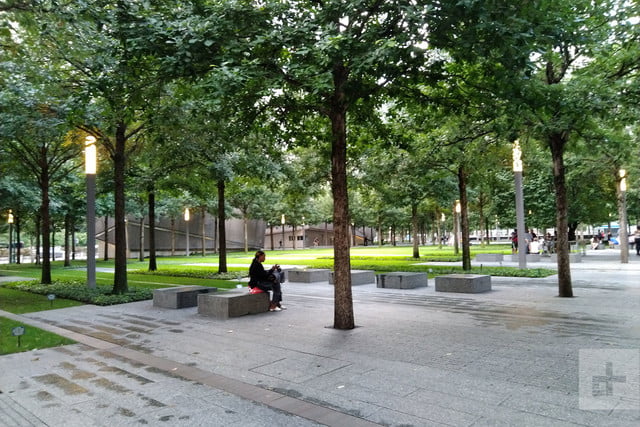 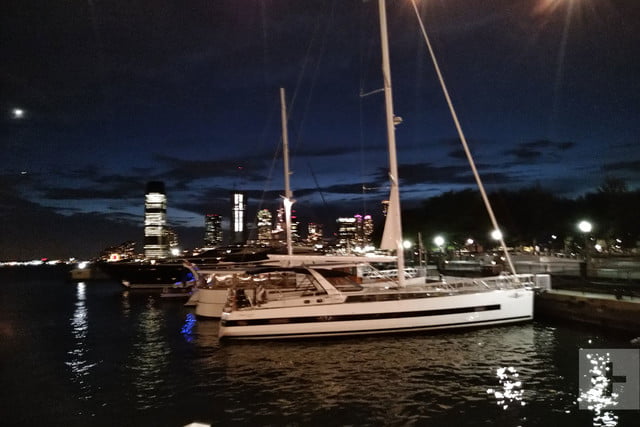 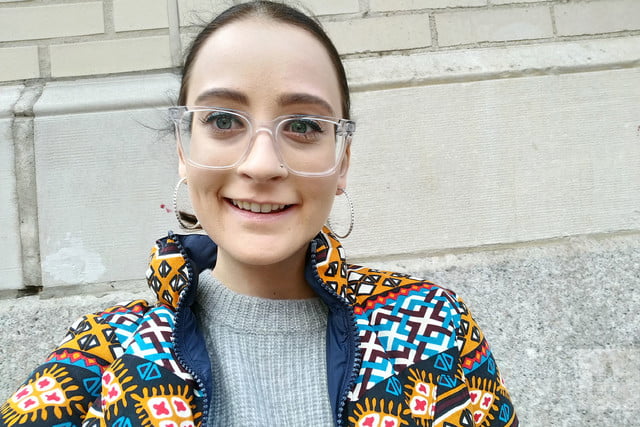 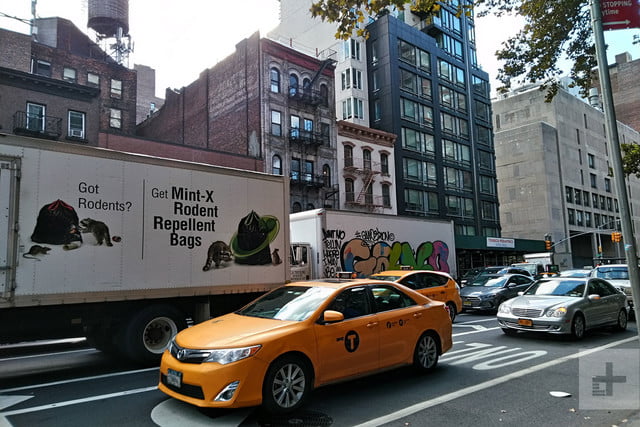 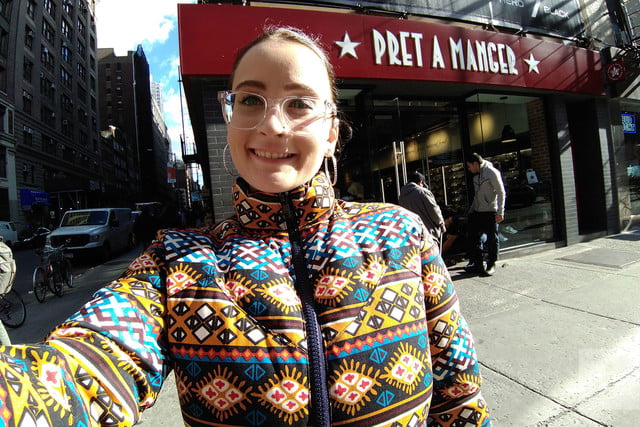 Those seem like impressive specs on paper, but we weren’t impressed with the results. Overall, we found our photos were both blurry and noisy. Without HDR we were left with photos that were either over exposed or under exposed in specific areas — like the trees surrounding landscape shots. With HDR turned on, the photos were decent in the daylight, but low light performance was poor. In wide angle shots, parts of the image always came out blurry.On the other hand, the 20-megapixel front-facing camera takes impressive selfies that capture a lot of detail. In the photos that we took, we could see the minor breakouts on our forehead, fly-aways when looking at our hair, and our skin color looks extremely accurate as well. If you’re the type who likes to edit their selfies, But when we switched to wide-angle selfies, we found that each snapshot came out blurry. Asus conveniently packed in a “Selfie Master” app which lets you apply a beauty filter in real-time before you take the selfie. There’s also the option to edit it within the app afterwards.

We found our photos were both blurry and noisy.

While it can take some good photos, it requires staying super still and having the best lighting conditions possible. Other than that, though, there’s nothing noteworthy about the Zenfone 5Q’s camera capabilities. If the camera is really important to you, we think you might be better off with a different phone.

No Android Pie, or even Oreo

The Zenfone 5Q runs Android 7.0 Nougat — specifically 7.1.1 which was the second to last update to come to the 2017 operating system. It’s disappointing that the phone launches without the latest version of Android, or even the one before that, especially with a smartphone that costs as much as $300. But the device should be receiving Android 8.0 Oreo soon.

The company’s ZenUI skin is not our favorite and there are some questionable features that are probably best ignored — but it’s better than before. You do at least have your standard suite of Google apps pre-installed — you can swipe right from the home screen to access the Google Feed, or to activate Google Assistant, press and hold the home button.

With a 3,300mAh battery powering the ASUS Zenfone 5Q, we were able to get a substantial amount of juice out of it for long periods of time. Before switching to it as our primary phone, we left it on overnight and still had 81 percent at 9 a.m. (that’s with all of our social media notifications coming in).

By 12:25 p.m., after having used Google Maps, Spotify, and taking a bunch of photos, it was at about 66 percent. We then took it through some benchmark testing at which point the battery only dropped to about 51 percent by 2:30 p.m. Towards the end of our work day, which included text messaging and scrolling through social media, we were at 48 percent and by 11:30 p.m, we were at 37 percent.

Of course, the longevity of the battery varies depending on how much you use it but either way, you can easily get an entire day’s worth (and then some) out of the Zenfone 5Q.

Unfortunately, the Micro USB charging is slow and there’s no support for wireless charging here.

The 64GB Asus Zenfone 5Q costs $300 and can be purchased unlocked directly from Asus or from Amazon and Best Buy. But it’s only compatible with GSM networks like AT&T and Verizon — those with Sprint and Verizon are out of luck. As for colorways, you’ll be able to choose between black or white.

Asus offers a standard one-year warranty on the Asus Zenfone 5Q that protects against manufacturing defects.

The Asus Zenfone 5Q is a beautiful smartphone on the outside, but once you peek under the hood you start to realize it’s not as impressive — especially for $300. There are plenty of other midrange smartphones on the market with the same processor, but better cameras, and more recent software.

Yes. We recommend the Nokia 6.1 which costs $270 — saving you $30. It comes with the same Snapdragon 630 processor, and the same 16-megapixel rear camera as the Zenfone 5Q. While it isn’t as sleek, it still has an attractive design, and with an all-metal build you won’t have to worry about shattering it. You may also consider spending a little more to snag the Nokia 7.1.

There’s also the Honor 7X which will set you back $200, or its successor, the Honor 8X. The standard Moto G6 is another option, but for those in the U.K. we recommend the Moto G6 Plus. For even more options, you can learn more in our best cheap phones guide.

The Zenfone 5Q should last you around two years — if you’re careful with it. Since it’s made of glass, you might want to get a protective case to keep it from shattering.

It might receive a few security updates but running Android 7.0 Nougat it’s not guaranteed you’ll be able to upgrade to a more recent operating system.

No, there are many other choices on the market if you’re looking for a budget phone. While you might have to spend a little bit more, shelling out extra cash will provide you with a more up to date smartphone that packs an even better processor and camera.

Read more from News
← Following the Portal, augmented reality glasses may be Facebook’s next step
Grab the AMD Ryzen 7 2700 with Wraith Spire LED cooler for $265 →