Blizzard this week introduced an all-new Apple TV app that will allow fans to stream content from BlizzCon 2018 on their 4th or 5th generation Apple TV. For those who can’t make it to the Anaheim, California event in person, Blizzard has always provided numerous ways for users to watch panels and videos live (on mobile and BlizzCon.com), but this marks the first year the company has built an app specifically for Apple TV.

While the app and some of its content are free, to get the most out of BlizzCon TV [Direct Link] you’ll need to purchase a $49.99 “Virtual Ticket” from Blizzard. This allows you to unlock all of the content to stream on BlizzCon TV, including original BlizzCon video content, a Community Night, the BlizzCon 2017 video archive, and live panel coverage. The Virtual Ticket also unlocks access to in-game items for Overwatch, World of Warcraft, Hearthstone, StarCraft II, StarCraft: Remastered, Heroes of the Storm, and Diablo III. The BlizzCon TV home screen on Apple TV shows upcoming events, live and on-demand videos, content broken down by various Blizzard games, and more. There’s a dedicated e-sports tab, which has already kicked off with content for Heroes of the Storm and StarCraft II, and will see World of Warcraft and Overwatch tournaments begin next week. Blizzard has the full BlizzCon 2018 schedule on its website, and viewers can prepare for opening ceremony events to kick off on Friday, November 2.

Besides the introduction of an Apple TV app, Blizzard is supporting AirPlay and Chromecast streaming from the BlizzCon mobile app to compatible devices for the first time in 2018. Fans will also be able to watch portions of the show live through the Blizzard Battle.net desktop app, so they can chat with friends as the event happens. There’s also a BlizzCon TV app for Amazon Fire TV users. 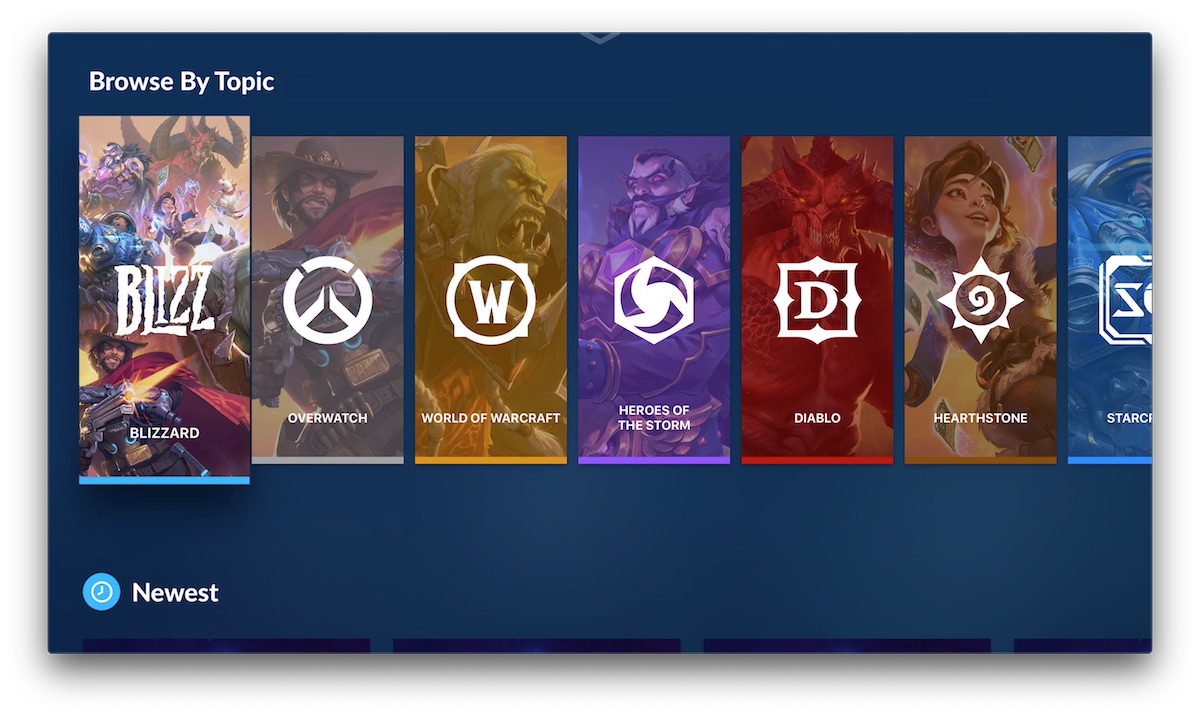 This marks the first Apple TV app developed by Blizzard. The company has created plenty of iOS apps, including a port for Hearthstone, a companion app for World of Warcraft, and an app for the Overwatch League. In 2017, there were numerous rumors surrounding the potential launch of Overwatch on macOS, but they were tenuous and it’s now been nearly a year since one of Blizzard’s engineers said there are “no plans” for the launch.

You can download BlizzCon TV for Apple TV today by searching for the app on the tvOS App Store, or using the Siri Remote.