The Instant Pot Ultra 8-quart 10-in-1 programmable pressure cooker is on sale for $119.95 as part of Amazon’s daily deals. This pressure cooker normally sells for around $180 and has never sold for less than $140 before. The drop to $120 marks a new low, even if it is temporary. Today’s deal makes it cost the same as the 3-quart version. 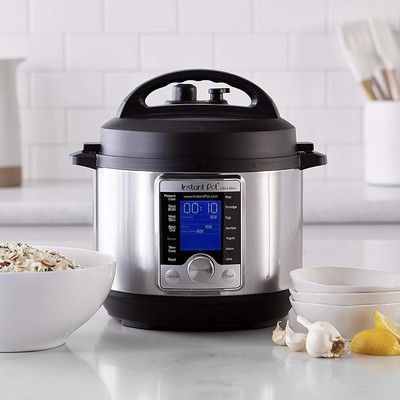 An eight-quart pressure cooker makes a lot of food. If you regularly cook for six or more people, then go for it. With 10 different uses, this pot can be a pressure cooker, slow cooker, rice cooker, yogurt maker, cake maker, egg cooker, saute, steamer, warmer, and sterilizer. Some of the features include an altitude adjustment, cooking indicator, and steam release. The pot’s embedded microprocessor monitors pressure, temperature, time, and more. Users give it 4.4 stars based on 1,561 reviews.

If you need some ideas on what to do with it, this Instant Pot cookbook we’ve shared before is free right now on Amazon.