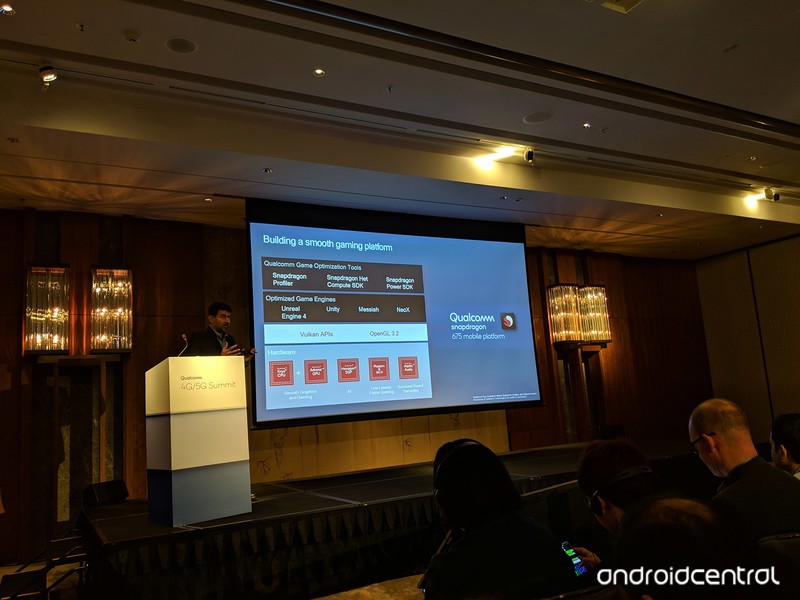 Qualcomm has unveiled the Snapdragon 670 and Snapdragon 710 in recent months, and the vendor is now launching the Snapdragon 675. The latest mid-range chipset shares a lot of the same hardware as the Snapdragon 670, but Qualcomm says it optimized the platform to facilitate smoother game play, prioritized connectivity, improved AI capabilities, better throughput and latency, all the while eliminating stutter by up to 90%.

Qualcomm is able to do so by a combination of new hardware and improved efficiency. The Snapdragon 670 and 710 featured third-gen Kryo 360 cores, but the Snapdragon 675 is the first to offer the fourth-generation Kryo 460 platform. The high-end cores in the Snapdragon 675 are based on ARM’s latest Cortex A76 cores that go up to 2.0GHz, and then there are six energy-efficient cores based on the A55 cluster. On the GPU side of things, Qualcomm is debuting the Adreno 612 with OpenGL ES 3.2, OpenCL 2.0, Vulkan, and DirectX 12 support.

The Snapdragon 675 also comes with Qualcomm’s third-gen AI engine. Qualcomm has been working on AI for well over a decade, and the vendor noted that it has over a billion devices in the market today that feature an AI engine. Qualcomm also notes that its AI engine is three times faster than other mid-tier platforms — it didn’t mention HiSilion and MediaTek, but it’s clear that Qualcomm is positioning AI as a key growth driver for its business.

Interestingly, the Snapdragon 675 is built on a 11nm fab. There shouldn’t be a lot of difference between the 10nm and 11nm nodes, and for its part Qualcomm says it looked at the factors that made the most amount of sense from a commercial standpoint when selecting the manufacturing node for the Snapdragon 675.

Qualcomm’s earlier strategy in this segment was to launch a higher-tier Snapdragon 600 chipset and a less powerful variant in the same series — much like the Snapdragon 660 and the Snapdragon 636 — and this cadence was largely driven by market conditions and manufacturer requirements. That has changed in 2018 as the mid-range segment itself has diversified, with manufacturers now focusing on distinct use cases. In that context, the Snapdragon 675 makes a lot of sense considering just how pervasive mobile gaming is becoming.

Qualcomm is also partnering with game publishers and designers to optimize their titles for the Snapdragon 675 platform, with the company noting that the chipset is optimized for Unity, Unreal, Messiah, and NeoX game engines.

The Snapdragon 675 is aimed at mid-range devices.

Camera quality is another that Qualcomm focused on with the Snapdragon 675. The chipset includes the Spectra 250L ISP with support for three camera sensors at the front or back, facilitating telephoto, wide angle, and super-wide imaging sensors. It offers 4K at 30fps, zero shutter lag with a single 25MP camera or dual 16MP shooters, and there’s also an “enhanced” portrait mode, 3D face unlock, and limitless 720p slow-motion video capture at 480fps.

The Snapdragon 675 is touted to deliver up to a 50% uptick in AI applications, with Qualcomm focusing on key use cases: scene and object detection, image style transfer, portrait relighting, face unlock, payment security, and voice. The image style transfer feature is interesting as it lets you use stylized filters with real-time previews.

Qualcomm is also making a lot of changes when it comes to the audio side of things. The 675 comes with AptX HD and has the Aqstic codec built-in.

The Snapdragon 675 also features an X12 LTE modem (Category 15) for download speeds of up to 600Mbps and 3x carrier aggregation. Elsewhere, there’s Quick Charge 4+ that lets you charge from zero to 50% in just 15 minutes. We haven’t seen a lot of momentum around Quick Charge 4 this year, but that should change in the coming months.

Essentially, the Snapdragon 675 is geared at mid-range devices with FHD+ panels, and with mobile gaming seeing a meteoric rise in markets like China, it’s likely this is where we’ll see the first slate of devices make their debut. Qualcomm mentions that the first set of phones to be powered by the Snapdragon 675 will launch in early 2019, and there’s a good chance that Vivo will be a launch partner.