Adobe is bringing Photoshop to the iPad and, eventually, other tablets 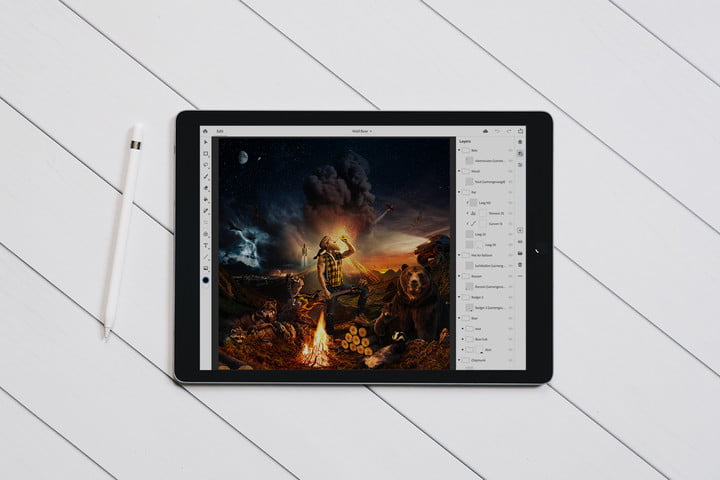 After bringing Lightroom to mobile devices, now it is Photoshop’s turn. During the Adobe MAX show, Adobe launched a preview of Photoshop for iPad, a move that the company says will bring all the tools of the full version to tablets. Photoshop sibling Lightroom also gains facial recognition to easily find photos of specific people, improved search and updated sharing tools. 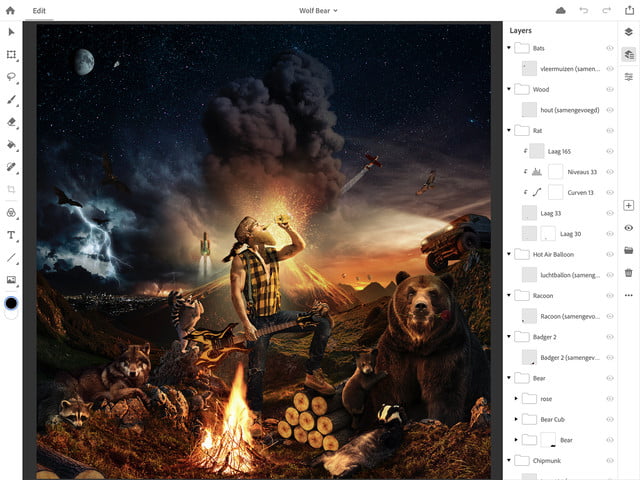 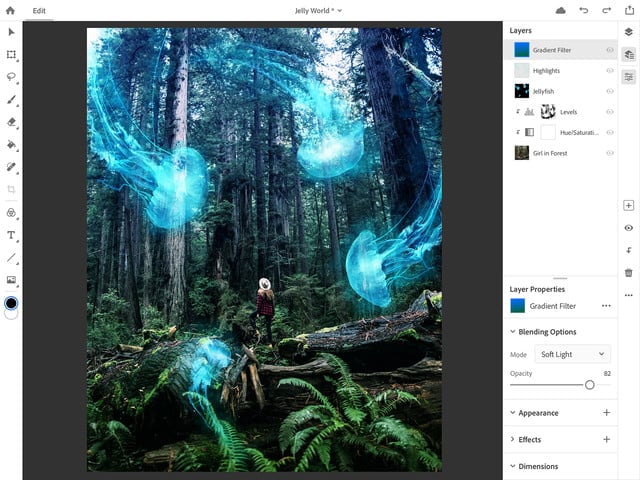 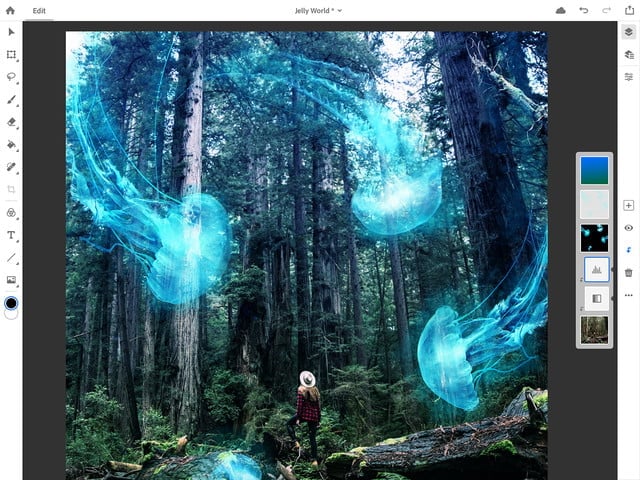 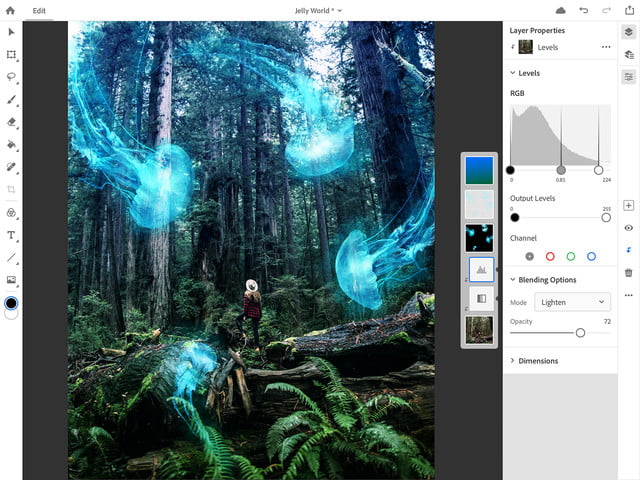 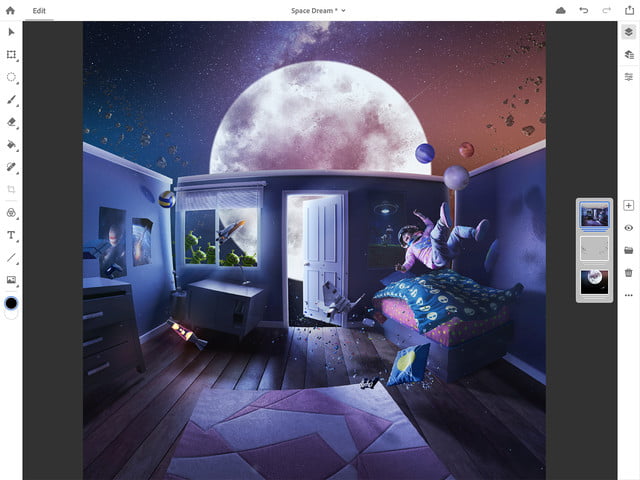 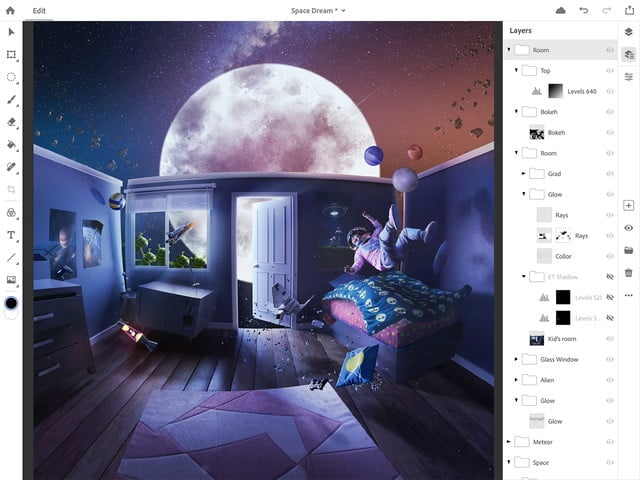 Adobe says the iPad Photoshop app is the real thing, based on the current desktop Photoshop code. The company says the iPad app will have identical tools to the desktop editor, including layers, masking, and even 3D tools. The iPad app will take a few versions to get to that same level of tools in order to launch the app faster, but Adobe says all of Photoshop’s tools are coming to iPad, and, eventually, additional tablets.

While the tools and the code base may be the same, editing with a mouse and editing with a touchscreen create vastly different workflows. While the iPad version of Photoshop will house the same tools, the interface gets a refresh to adapt to the new medium. On the iPad, the toolbars are smaller to leave more screen space to actual editing work, while a full-screen mode will still leave a mini icon available for tool swaps. The app will also be Apple Pencil friendly.

The touch interface also brings new touch controls — for example, photo editors can open the layers panel with a pinch zoom. Adobe says the app uses a context aware user interface, which minimizes unnecessary tools and opens toolbars only when that tool is in use.

Adobe stresses that the iPad app is the not a separate version, like Photoshop Express. Instead, the iPad version will be able to work with the same PSD files users create on the desktop. The program syncs edits between the iPad and a desktop using Creative Cloud, which means users don’t have to import and export to work on a single image from multiple devices.

Adobe is just launching a sneak peek at the upcoming iPad app — the company hasn’t yet shared when the app will launch. 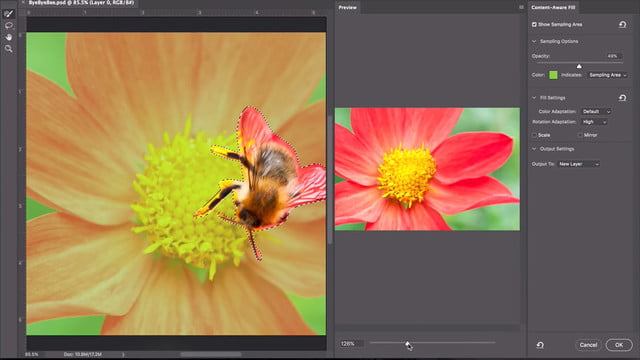 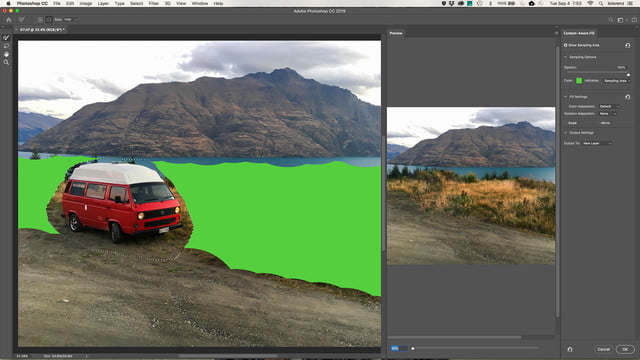 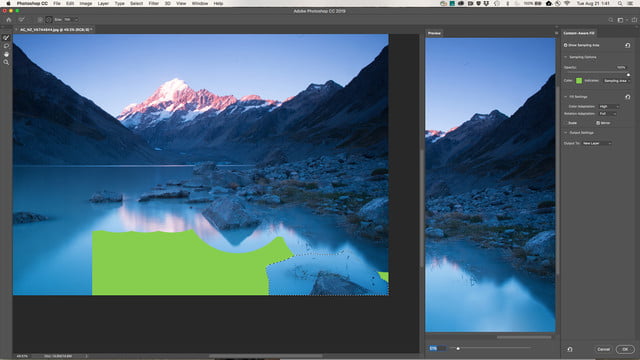 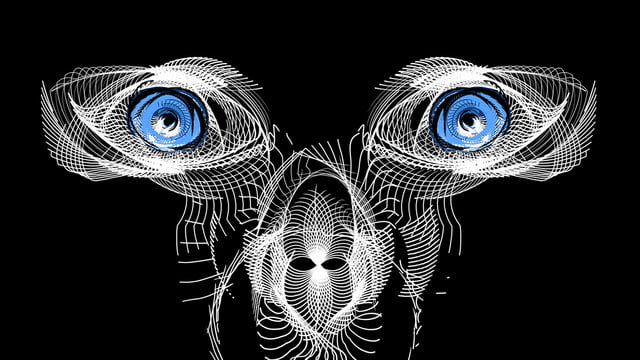 Photoshop on desktop users will also receive several new tools, as well as some smaller tweaks to improve workflow and fix minor annoyances. Oh, and Creative Cloud users now have the option to automatically install new versions of apps.

The launch includes a re-designed approach to Content-Aware Fill that gives editors more control over the final results. The tool, which is commonly used to remove objects from images, allows photo editors to choose which parts of the image is replicated inside the fill by choosing a sampling area. The tool also allows photo editors to scale or flip that area to create a more seamless fill. (The original Content-Aware Fill will also still be available).

Several changes to the app are aimed at workflow improvements and user suggestions. The undo keyboard shortcut will now continue to undo actions, in order, instead of reverting to a redo command after the first action. Photo editors will no longer have to hit enter to commit changes like crops before moving on to a new tool and transforming a layer automatically maintains proper proportions, no shift key necessary. Text can now be edited by a double tap from the move tool, instead of heading back to the toolbar to select the text tool.

Additional updates include the option to hide the later reference point, lock layers in place, preview blend modes, evenly distribute spacing between multiple objects, and a handful of other interface improvements. 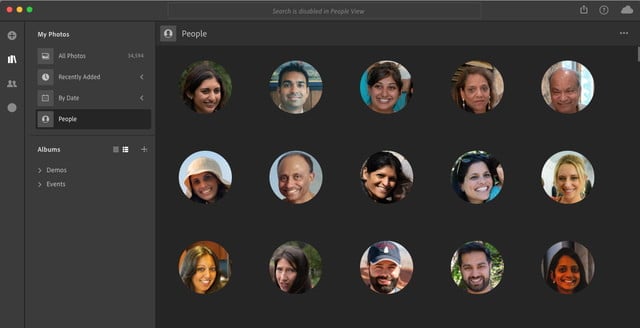 Lightroom CC on the desktop is also now compatible with the Apple Photos Migrator to send photos between the two library systems.

Lightroom Classic also sees a handful of small changes with the Max launches. Photo editors on Adobe’s desktop-only Lightroom can use depth maps from dual lens smartphones in the range masking tools to select areas of the image based on depth. Tethered shooting speed is also boosted in the latest version for Canon cameras, with an update for Nikon users still to come.

Adobe also simplified creating a panoramic HDR merge in fewer steps — instead of creating multiple panoramas first to layer into HDR, the merge options now include an HDR panorama tool. Adobe Camera RAW also gains the same feature. Beyond Photoshop and Lightroom, Adobe showed off updates to several other apps today, in addition to launching some totally new ones.

Read more from News
← Adobe’s Premiere Rush is a video-editing app designed for social media projects
Did your Windows 10 audio stop working after the update? Microsoft has a fix →