If you’ve ever been curious about mesh networking but found these giant four piece systems too daunting, the new Ubiquiti Networks AmpliFi Instant Wi-Fi System might be your ticket in. It is designed to be setup in just a couple of minutes. The most basic package only comes with the AmpliFi Instant Router, and that’s good for coverage up to 2,000 square feet. If you’re feeling brave you can upgrade to the bundle that includes one MeshPoint extension. The extension comes already paired with the router, so all you’ll need to do is plug it in where it’s needed. 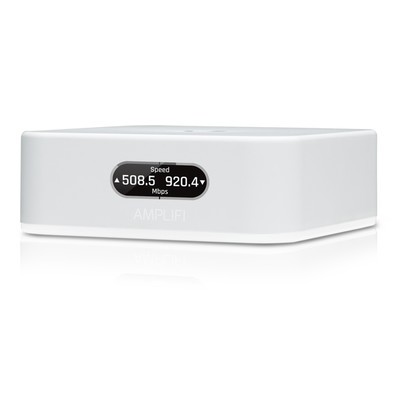 This is not Ubiquiti’s first foray into mesh networkng. The original AmpliFi HD is still a very good system, too, and one we have seen go on sale a few times this year. But even on sale it’s still not as affordable as the Instant, which starts at $99 for just the router. The Google Wi-Fi system and TP-Link Deco M5 are probably the only decent systems that come close in terms of expense, but both of those come with multiple devices to setup.

The router has a touchscreen display, similar to the AmpliFi HD, a one Gigabit Ethernet port, and a WAN port for connection to your cable or DSL modem. It uses dual-band 802.11ac Wi-Fi with 2.4GHz and 5GHz radios. When you first set it up, you’ll use the free app on both iOS and Android to configure it. Later, you’ll be able to use it to check network stability, parental controls, remote access, guest access, and more.