There are two models of Portal: the 10-inch base model and a 15-inch “Portal+” model with a display that pivots between portrait and landscape modes. Each device includes AI technology, a Smart Camera, and Smart Sound. The Smart Camera follows where you move around a room and automatically pans and zooms to keep everyone in view, while Smart Sound minimizes background noise and enhances the voice of who is talking.

Portal connects to your friends list on Facebook Messenger, and you can call them even if they don’t have a Portal. Calls made via Portal will also be sent to Messenger apps on iOS and Android smartphones, and Portal supports group calls of up to seven people at the same time.

The video calling device supports hands-free voice control, so you can start a video call by saying “Hey Portal” and following up with who you want to call. Alexa is built into the device, so you can also ask about the weather, news, traffic, control smart home products, and more on Portal.

With Portal, you can listen to music together with a friend or even watch a television show with another Portal user, through connected partnerships with Spotify Premium, Pandora, iHeartRadio, Facebook Watch, Food Network, and Newsy. Portal video calls also support AR effects, filters, and stickers.

In terms of audio, Facebook says Portal has two full-range drivers, while Portal+ has two tweeters with high-range frequency and a single 4″ bass speaker. 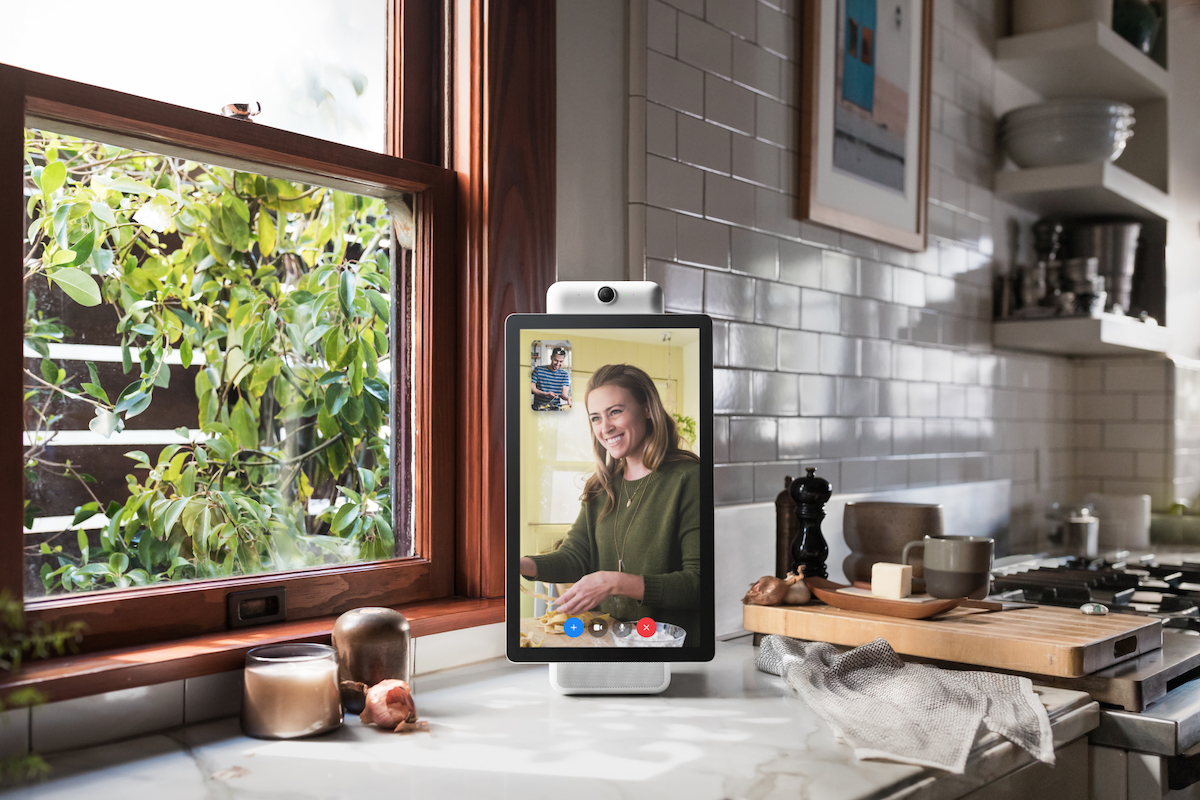 Facebook is launching Portal in the middle of a turbulent year, following months of news coverage over its ties to data mining firm Cambridge Analytica. A Facebook-branded smart speaker with video capabilities was previously rumored, and then delayed following the scandal.

– You can completely disable the camera and microphone with a single tap.
– Portal and Portal+ also come with a camera cover, so you can easily block your camera’s lens at any time and still receive incoming calls and notifications, plus use voice commands.
– To manage Portal access within your home, you can set a four- to 12-digit passcode to keep the screen locked. Changing the passcode requires your Facebook password.
– Facebook doesn’t listen to, view, or keep the contents of your Portal video calls. Your Portal conversations stay between you and the people you’re calling. In addition, video calls on Portal are encrypted, so your calls are always secure.
– For added security, Smart Camera and Smart Sound use AI technology that runs locally on Portal, not on Facebook servers. Portal’s camera doesn’t use facial recognition and doesn’t identify who you are.
– Like other voice-enabled devices, Portal only sends voice commands to Facebook servers after you say, “Hey Portal.” You can delete your Portal’s voice history in your Facebook Activity Log at any time.

Portal and Portal+ are available to pre-order in the United States on Facebook.com, Amazon, and Best Buy. Portal is $199 and Portal+ is $349, while a bundle of two regular Portal devices is $298.